The Caribbean team needs to win to stay live in the tournament.

England Legends are in a bit of strife after losing their last two games in the tournament. The defeats against South Africa Legends and Sri Lankans haven’t helped their cause after wins in their first two matches. In their previous game, the Proteas suffered a massive batting collapse after TM Dilshan’s four-wicket haul. A victory in their next match would take them through to the semi-final stage.

Their next game is against West Indies Legends on Tuesday, March 16 at the Shaheed Veer Narayan Stadium in Raipur. The Caribbean team, on the other hand, need a win to have any chance of progressing to the next round. The fact that they have a better net run rate than England is also in their favour. Having beaten Bangladesh Legends, West Indies must be brimming with confidence.

The pitch in Raipur has been a decent one for batting. It has helped the spinners to some extent of late. The job for the batters may not be all that easy. Chasing should be the way forward. There are no chances of a downpour with the temperature around 31 degrees Celsius. The humidity will mostly be in the low-30s.

Monty Panesar has been outstanding for England in the tournament. The left-arm spinner has played four games and has picked up eight wickets. The fact that he picked up four wickets in the last game should give him confidence. Moreover, the tweaker has bowled at an economy of 4.73.

Brian Lara was a legendary player of his generation and he hasn’t run out of gas by any means. He is currently the leading run-scorer for his team with 105 runs at an average and strike-rate of 52.50 and 110.52 respectively. England need to see his back at the earliest to go to safer shores in the event.

Broadcast Details for ENGL vs WIL 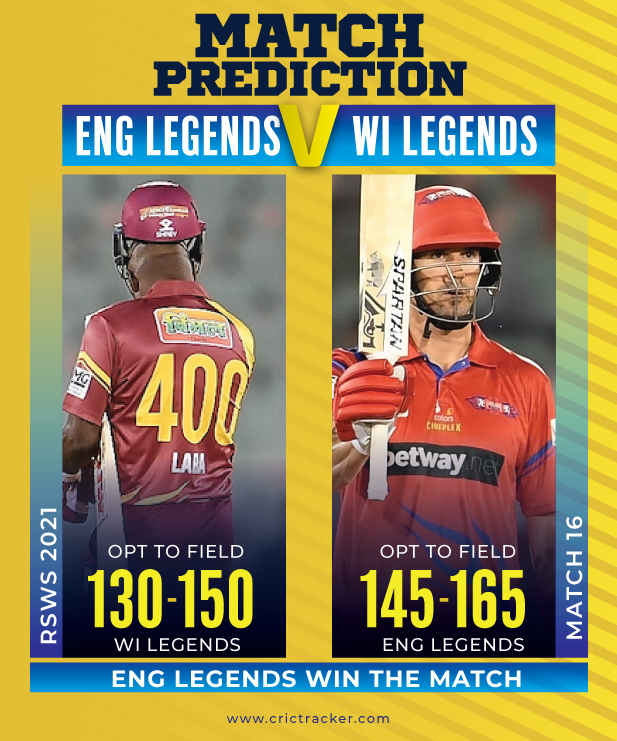