England vs Australia 2020, 2nd ODI: Cricket Match Prediction: Who will win the match?

England vs Australia 2020, 2nd ODI: Cricket Match Prediction: Who will win the match?

Australia would be proud that they eventually contained their opponents 19 runs short of the target to open their account in the series as well as the ODI Super League.

The first game at Southampton between Australia and England was a paragon of the competitive, ebbing and flowing nature of cricket courtesy an equitable and just surface that had ample in it to offer for all the characters. When the hosts proceeded with the ball, they pushed Australia on the back foot with utter dominance and immediacy. The tourists were on the receiving end of a swelteringly fluent Mark Wood and Jofra Archer, who were thoroughly unhospitable towards the Australian top-order.

The visitors dragged themselves out of hopelessness when two unfulfilled limited-overs talents – Glenn Maxwell (77 from 59) and Mitchell Marsh (73 from 100) – united in the middle to evade the threat of succumbing for a disrespectable total looming large over their team. Well, that’s what most would expect with half-the-side down and 123 on the board. If their 126-run alliance (the highest 6th wicket stand for Australia against England) swayed the game in their favor, the English bowlers came into contention with some fine death bowling by giving only 35 runs in the last five overs.

Coming to chase under six an over, England would have backed themselves given their depth and sturdiness at the top, and that is precisely why Australia’s successful defense of 294 should largely be accredited to their pace trio, that was fearsomely fierce and launched a barrage of unplayable deliveries straight up. The tourists’ stellar attack – led by Josh Hazelwood – blew away the English top order in what was a display of perfect retribution. England looked alien at home, flummoxed to the extent of being.

22 for two in the powerplay took only six more overs to turn 57 for four as skipper Eoin Morgan departed. But in the roller-coaster scheme, it was now England’s turn to take the driving seat. Jonny Bairstow became the one who played the resilient game and scored merely 11 runs in his first 40 balls. That he survived the hard-fought battle keeping his hard-hitting instincts quiet throughout his 84 off 107 and the 113-run stand with Sam Billings, should be a boost for him as well as his side.

Even after the near-match-saving alliance between Bairstow and Billings was broken, the latter’s effort to keep his team in the hunt lasted, and he singlehandedly scripted two partnerships of 41 runs each with Chris Woakes and Jofra Archer, where he contributed 30 and 31 respectively. Australia would be proud that they eventually contained their opponents 19 runs short of the target to open their account in the series as well as the ODI Super League, however, Morgan and Co. cannot be expected to let the second game go easy.

Adam Zampa and Adil Rashid bagged four and two respectively in their quota of 10 overs, which highlights that spinners were in the game indeed while the pacers grabbed the limelight. And that is what Eoin Morgan had expected from the track on the eve of the series opener. With the same strip being used for the second game, the scoring will be slightly sluggish.

The hosts went ahead with the template of chasing, however, it will be interesting to see if the teams change the plot given that batting became easier under the lights, or stick with chasing as the last seven games at Manchester have all been won by the side batting first. There is no expectation of rain.

England are not expected to make any change, however, their top-order, after a dismal outing, would want to apply themselves better and play with more intent. Sam Billings – who made his debut for England half-a-decade ago – played a knock parallel to his talent and suggested himself as an able contender in Ben Stokes’ absence.

As far as Jofra Archer, who made an ODI appearance straight after the World Cup 2019 final, and Mark Wood are concerned, they have shown their skills in the powerplay as well as the death. Chris Woakes bowled better than what his end figures reflect, but he would want to make a bigger impact as wickets are the only guarantor of space for a bowler in the team.

Pressure will be on Alex Carey, who has not been able to get going ever since the start of the tour. Steve Smith, who has passed his second concussion test on Saturday, is expected to replace his deputy Marcus Stoinis at No. 3. Further, Kane Richardson might come in for Mitchell Starc, who suffered a groin strain in the last game and looked in visible discomfort. However, if fit for selection, Starc will be the preferred choice alongside Josh Hazlewood and Pat Cummins. No other change in the winning combination is expected for Australia. 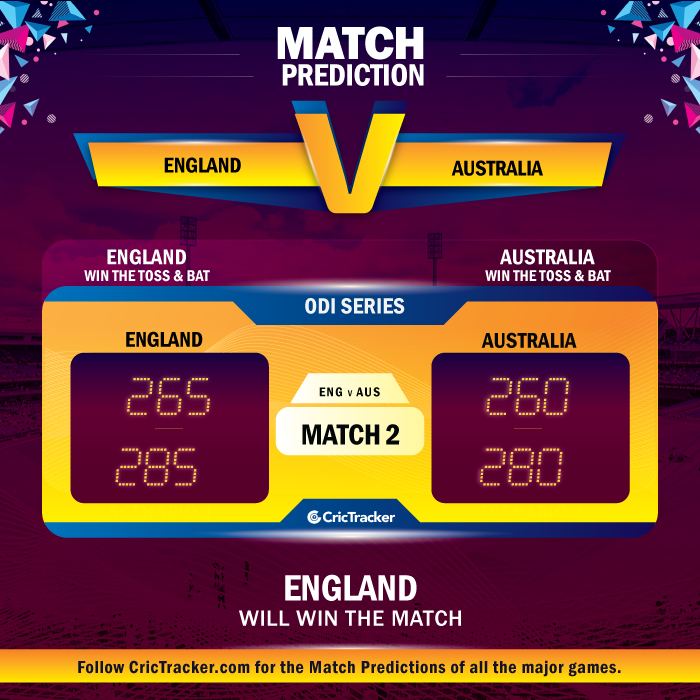