England vs India: 1st T20I- Match Prediction: Who will win the match England or India?

England vs India: 1st T20I- Match Prediction: Who will win the match England or India?

In 6 matches at the venue, the teams batting second have won three times.

Even before the start of the T20I series, India have already been encountered with a couple of injury eliminations in the form of Jasprit Bumrah and Washington Sundar. Fortunately, they have found their replacements and will be taking the field in tomorrow’s match at the Old Trafford in Manchester. After winning their series versus Ireland, the Blue Army would be keen to continue their winning momentum.

England, on the other hand, is in the middle of a dream run in the limited-overs format. Not only did they beat Australia in their previous series, but also made sure that the victories were comprehensive. In their only T20I, they made some alterations in the lineup, which didn’t backfire. Virat Kohli’s men have been stupendous in coloured-clothing cricket, but turning over Eoin Morgan and Co. won’t be a cakewalk.

The track is expected to assist the pacers, but batting won’t be an ardent task by any means. In 6 matches at the venue, the teams batting second have won three times and hence, either of India or England would want to field first after winning the toss. Overall, the series opener is expected to be a crackerjack with both teams in prime form.

The Brits are expected to be unchanged in their upcoming match. Jos Buttler, following his whirlwind knock in Birmingham, will definitely open along with Jason Roy. Morgan comes in at three. Alex Hales and Jonny Bairstow, who bat in the top order in ODIs, will take charge in the middle order. Joe Root’s role in the power-packed lineup can’t be undermined either.

In the bowling department, the spin twin of Moeen Ali and Adil Rashid would be eager to replicate their form from the previous series against the Aussies. Moeen is also more than a handy batsman lower down. David Willey is another of the all-rounders along with Moeen. Chris Jordan and Liam Plunkett are the remaining fast bowlers in the lineup.

Rohit Sharma and Shikhar Dhawan will be back as the openers after the first Ireland T20I. Suresh Raina remains to be the number three with Virat Kohli at four. The Indian captain would want to achieve the milestone of 2000 T20I runs, which he couldn’t accomplish owing to two low scores versus Ireland. Dinesh Karthik will retain his place in the team, this time as a batsman.

MS Dhoni will return to the side and Hardik Pandya is the big hitter. Pandya’s role as a bowler will also need to come to the fore. In the bowling department, Umesh Yadav would be persisted with in the absence of Bumrah. Bhuvneshwar Kumar will be his bowling partner. The wrist spinners in Kuldeep Yadav and Yuzvendra Chahal will also be crucial to their team’s chances of winning.

The prediction is for England to win the match and carry over their winning form from the Australia series. 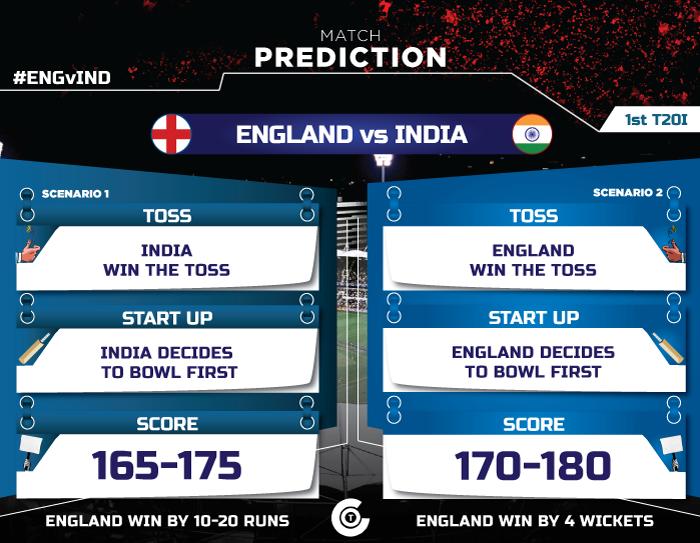