Jonny Bairstow scored 122 runs in three games for England this year in T20I cricket at an average of 41.

The first match of the three-match T20I series between England and Pakistan will be played at the Old Trafford in Manchester.

After a highly competitive Test series, England and Pakistan will now lock horns with each other in the T20I series. Three games are set to be played in this series with the first one kicking off on Friday in Manchester. The home team will start this series with a clean slate, as in, none of the players from the Test squad are a part of the T20I squad. After the loss against Ireland in the previous ODI they played, England will look to bounce back and prove a point in this series.

Pakistan, on the other hand, will be looking to improve upon their performance after the loss in the Test series. They have got quite a few T20 specialists in their side. They are currently ranked 4th in the ICC T20I Rankings and would like to make their way up the ladder.

While there is a slight chance of rain in the evening, this should not upset the proceedings. We might have a slight delay in between.

The pitch is a decent one to bat on and has something on offer for the bowlers as well. The team that wins the toss should look to bowl first.

Jonny Bairstow scored 122 runs in three games for England this year in T20I cricket at an average of 41.

Tom Curran has been the pick of the bowlers for England this year. In three games, he picked up 5 wickets.

With 84 runs in 2 matches this year at an average of 84, Mohammad Hafeez is one of the top picks for this game.

Shoaib Malik mustered 58 runs in the only innings he played this year and should be a great pick for your Fantasy side. 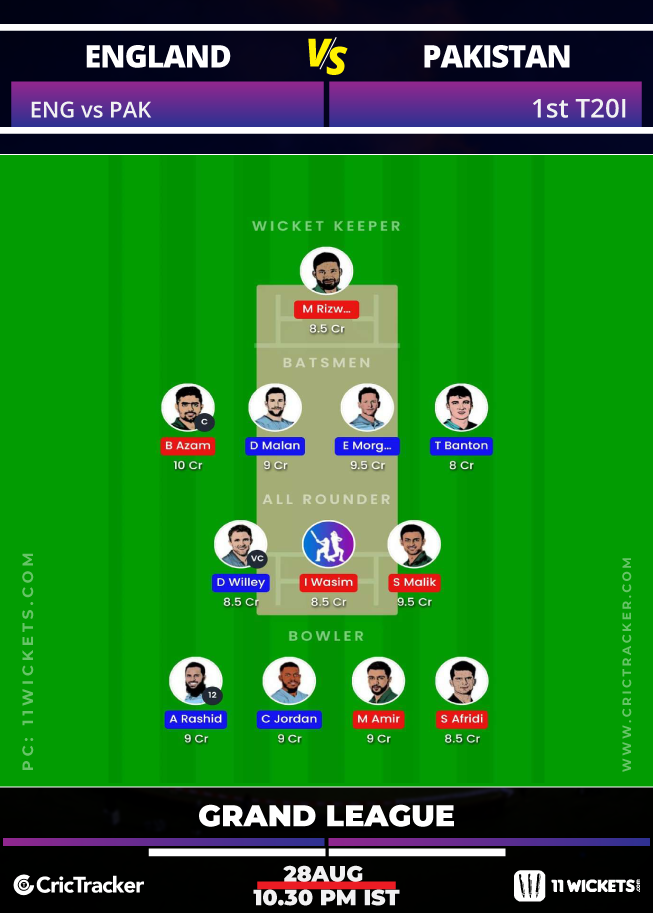 Wahab Riaz is picked as a wildcard multiplier option considering his performance at this venue in the last game he played. However, this could be very risky. You can go for Jonny Bairstow or Chris Jordan otherwise in your 11Wickets Fantasy team.