Amir has been ruled out of this match.

With the Indian Premier League (IPL) coming to a conclusion, the focus of the cricketing world will completely shift to international cricket now. World Cup is only 17 days away from getting underway and England and Pakistan are fighting it out in the five-match ODI series. England are leading by 1-0 after two matches and the visitors would be ruing the missed chance of registering their highest successful chase in the ODI at the Rose Bowl in Southampton.

The Men in Green bowled extremely poorly at the death in the previous game and they would want to improve their show in that aspect. Jos Buttler is in the best possible space at the moment and he made the most of his current form to slam a 50-ball century in the second ODI. Fakhar Zaman stormed back into form on a flat pitch in the chase and almost helped his team get over the line.

Both the teams should improve drastically with the ball in hand and the time is running out for them. It is highly likely that Pakistan might want to try out Junaid Khan in place of Faheem Ashraf. Also, with the flat pitch in the offing again, Haris Sohail is likely to make way for Shoaib Malik. Adil Rashid and Jofra Archer weren’t seen in the nets and the duo might miss out on this game.

The third ODI of the five-match series between England and Pakistan will be hosted by the County Ground in Bristol.

The game will be live on Sony Six HD and Sony Six in India. (Live Streaming on Sony LIV)

It will be mostly sunny in Bristol during the match. The temperature will hover around 18-20 degrees Celsius while there is no rain in the forecast as well.

The County Ground in Bristol has played hosts to four domestic One-Day Cup matches this season and only once the 300-run barrier has been broken this season. Batsmen might have to work hard to score runs in this game and a total around 280-290 could be par.

Mohammad Amir has been ruled out of the third with suspected chickenpox.

There is no update on Mohammad Hafeez’s injury.

Jofra Archer and Adil Rashid weren’t seen in the nets and might miss this game.

Shoaib Malik joined the team on May 9 ahead of the second ODI. 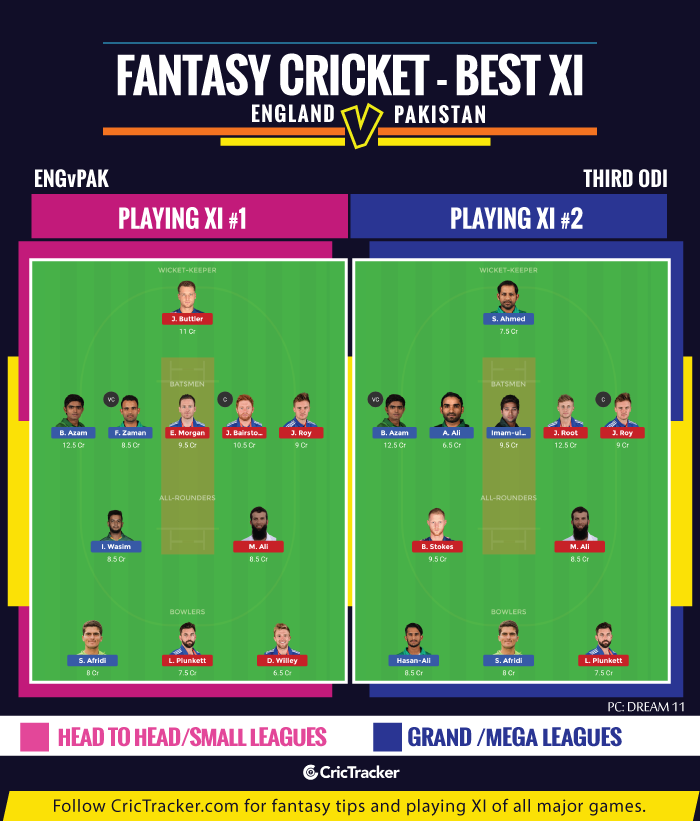 Jason Roy normally plays a big knock only once in the series and a risk of not picking him in the fantasy team is worth taking.

Either of Babar or Root has to be left out if you have to pick Jos Buttler. Leaving out Root is a decent option as well.

England are expected to continue their winning run and take a 2-0 lead in the series.