The venue will be hosting its first ODI since September 2017.

Pakistan did exceptionally in their quest to chase down a humungous 374 against England at the Rose Bowl in Southampton. Fakhar Zaman scored a century, but all those efforts went in vain as the visitors fell short by 12 runs. The teams are next scheduled to play tomorrow at the County Ground in Bristol and another defeat for Pakistan would mean that the Three Lions won’t lose the series.

As far as the Eoin Morgan-led Brits are concerned, their batting was flawless with Jos Buttler inflicting most of the damage courtesy of a 55-ball 110. Four of their top five batsmen scored half-centuries with only Joe Root missing out, having scored 40 off 54 before perishing to Yasir Shah. However, their bowling was shoddy, to say the least with David Willey being their most economical bowler.

The venue will be hosting its first ODI since September 2017. In fact, only three ODIs were played at the ground since July 2010. The pitch has churned out 300 plus scores in a number of instances but has seen some low scores as well. The top score of 369 came in the previous game here in Bristol. Out of the 15 completed games, seven were won by the team, batting first.

First and foremost, there are no chances of rain and that should be relieving for the players. The temperature will be around the 18 degrees Celsius mark. The humidity is expected to be below the 50 per cent mark as the sun will shine bright with not much of a cloud cover.

The Brits may bring in Joe Denly in place of Adil Rashid, who wasn’t seen in the practice session today. Rashid also had an off day with the ball as he leaked 81 runs in his 10 overs. The rest of the lineup remains to be the same. Roy and Bairstow will be looking for another fast start. Chris Woakes sent at an economy of eight at the Rose Bowl and he will be keen to make amends.

Pakistan are expected to make a couple of changes. Faheem Ashraf has been awful in 2019 and even last time, he gave 69 runs without any success. He may make way for Junaid Khan. The onus will be on Afridi and Hasan Ali, who also went at an economy of over eight. The very experienced Shoaib Malik comes in for Haris Sohail. Imad Wasim was economical to start with, but even he was taken for runs.

The prediction is for England to win the contest. 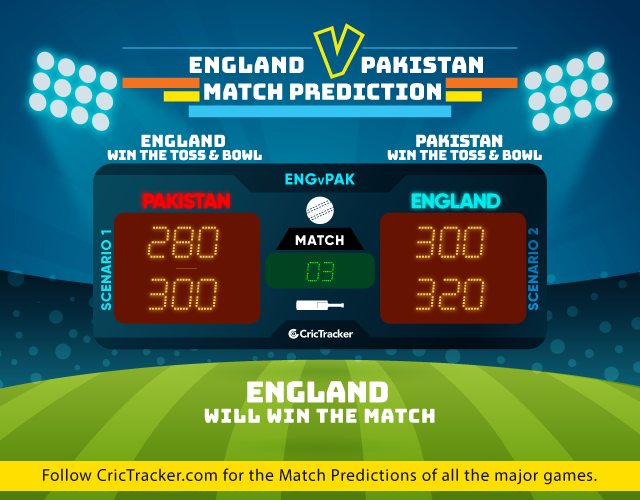 Get the latest Cricket News and updates from the England vs Pakistan Series, Match Predictions, Fantasy Cricket Tips and lots more on CricTracker.com.