Imam-ul-Haq suffered an elbow injury and may be rested.

Pakistan has now slumped to a couple of back-to-back series defeats in the ODI format. After their 5-0 whitewash versus Australia, Sarfaraz Ahmed and Co has now lost the series versus England. The story in the previous match was pretty similar to the ones in the previous two encounters. Their batting put a stupendous show but the bowling couldn’t get the English batsmen on the mat by any means.

Yesterday, the visitors had Babar Azam as their third centurion and his knock went in vain as England chased down 341 with three balls remaining. Jason Roy’s blinder of 114 helped the Brits to an unassailable 3-0 lead with the last ODI to be played tomorrow at the Headingley in Leeds. The hosts didn’t have their skipper- Eoin Morgan, who is expected to be back after serving a one-match ban.

The fifth ODI of the five-match series between England and Pakistan will be hosted by Headingley in Leeds.

The game will be live on Sony Six HD and Sony Six in India. (Live Streaming on Sony LIV).

There is a slight chance of rain throughout the day. The cloud cover will be around 76 per cent mark. The temperature will be around the 18 degrees Celsius with the humidity inside the 50s.

The pitch is expected to be good for batting over the past few games. All the games have been a witness to scores in excess of 300 and tomorrow, another high-scoring affair may be on the cards.

Imam-ul-Haq suffered an elbow injury and may be rested.

Eoin Morgan is expected to be back after the suspension.

Joe Root in ODIs in Leeds: 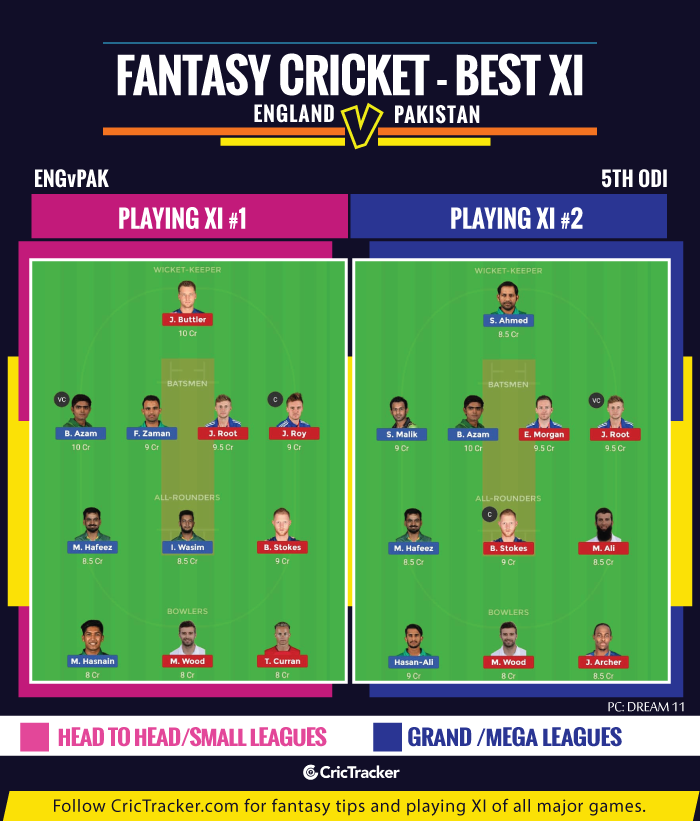 The primary focus should be to pick more batsmen, including the ones in the all-rounder’s category.

England is most likely to win the match.