England vs Pakistan Match Prediction – Who will win today’s 1st ODI match between ENG vs PAK?

Can a depleted English team beat a full-strength Pakistan unit?

England and Pakistan are all set to take part in a three-match ODI series, starting Thursday, July 8 at the Sophia Gardens in Cardiff. The hosts had to announce a completely different squad, led by Ben Stokes.

The first-choice team had to go into self-isolation following the emergence of COVID-19 cases. Pakistan, on the other hand, have a power-packed squad, led by Babar Azam.

In a last-minute change, they included Sohaib Maqsood in the team after Haider Ali was found guilty of breaching the coronavirus protocols during the PSL. The visitors can be deemed as the favourites in the ODIs.

The venue at the Sophia Gardens recently hosted two T20Is where run-making wasn’t all that easy. The spinners got a fair amount of assistance from the surface.

History at the venue says that the chasing teams have dominated and hence, batting second should be the way forward. There are chances of occasional showers during match time and a few delays could be there.

Babar Azam has been exceptional for Pakistan over the last five years or so. He has shown why he’s one of the best in the business. His numbers against England are a tad mediocre compared to other opponents, yet he remains as a force to reckon with. In 16 ODIs against the Three Lions, Babar has notched 639 runs at an average of 45.64 with a top of 115 at the Trent Bridge in Nottingham.

Hasan Ali has been impressive for Pakistan ever since he made his comeback to the national team earlier this year. In 54 ODIs, the pacer has picked up 83 wickets. Against England, the speedster has gotten 14 wickets from 11 matches and he’s a key member of the Pakistan team. Not t forget that Hasan can do a fair amount of damage courtesy of his power-hitting with the bat in hand.

Today’s match prediction: Pakistan are expected to win this match. 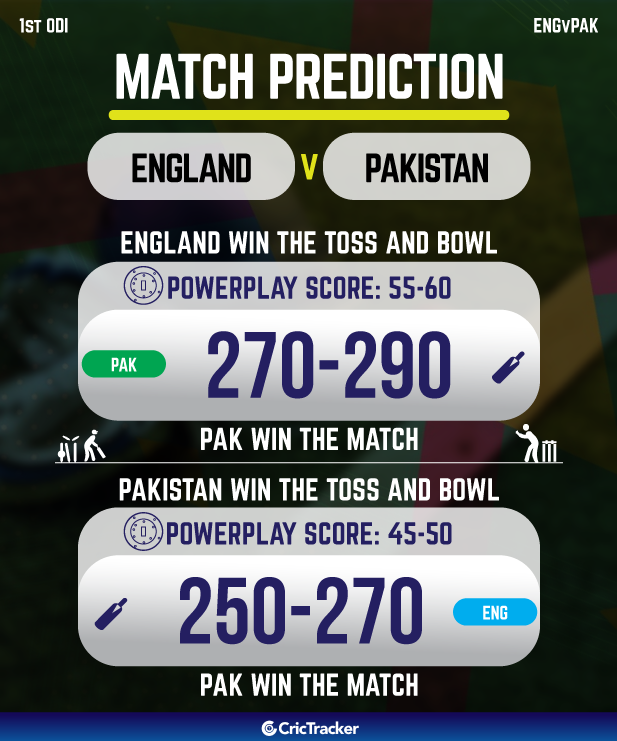