England vs Pakistan Match Prediction – Who will win today’s 2nd T20I match between ENG vs PAK?

The hosts are likely to make a couple of changes after the defeat in Nottingham.

England and Pakistan were involved in a run-fest in Friday’s match at the Trent Bridge in Nottingham. Both teams scored in excess of 200 runs, but after loads of twists and turns, the Men in Green came out trumps by 31 runs.

Babar Azam and Mohammad Rizwan set the tone for the visiting team from the start. Thereafter, the bowlers stepped up and restricted the Three Lions’ batters. For the home team, Liam Livingstone went berserk and scored his maiden T20I century off 42 balls, but his knock went in vain.

The second game of the three-match series is set to take place on Sunday, July 18 at the Headingley. It’s a must-win affair for the hosts to stay alive in the series.

In the first match, a number of England’s stalwarts, including Jos Buttler, Adil Rashid and others didn’t play. They might make a return keeping in mind the situation. For Pakistan, they will be desperate to carry on with the winning momentum.

The venue at the Headingly in Leeds hasn’t hosted a single T20I game thus far. Hence, it’s hard to tell how the track would behave. Hence, bowling first and seeing the nature of the strip should be the way forward for both teams. The conditions will be partly sunny with the temperature around 26 degrees Celsius. The humidity will mostly be in the 50s.

Jason Roy got off to an impressive start in the first match of the series in Nottingham. He was rollicking along, having scored 32 runs off 13 balls at a strike rate of 246.15. His knock was laced with two fours and three massive sixes, but he got out to Shadab Khan. In 2021, Roy has gotten quite a few scores in the 30s and 40s and it’s now time for him to get a big score under his belt.

Shaheen Shah Afridi was outstanding in the opening match. He bagged the Player of the Match award after he ended with a spell of 3.2-0-30-3. He got the prized wickets of opener Dawid Malan, who got a duck, the dangerous Jonny Bairstow and Matthew Parkinson. He bowled five wides but made up for them with the crucial scalps. The southpaw will again be expected to deliver. 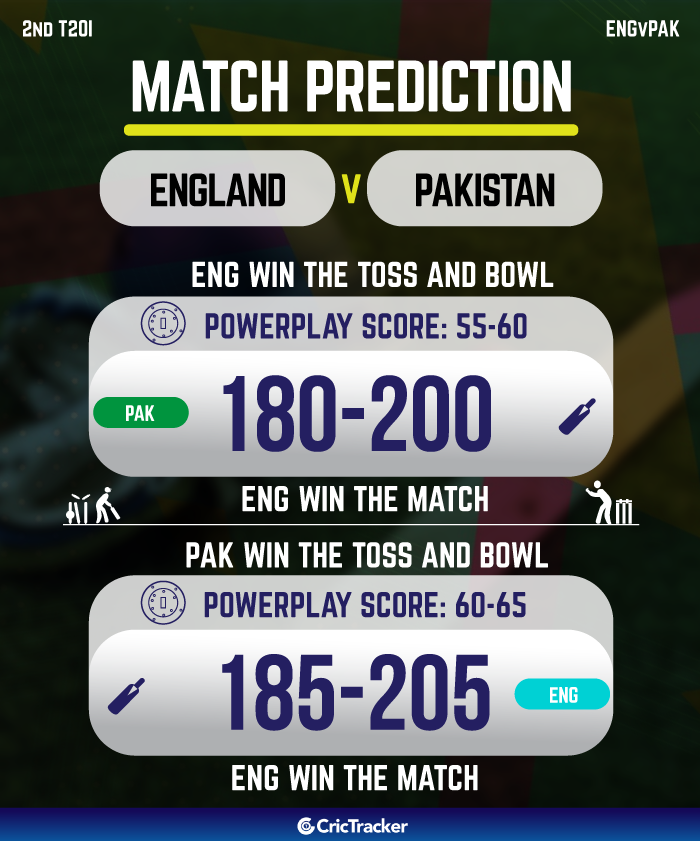