Here are the statistical highlights from the 3rd day’s play of the Southampton Test match.

West Indies tightened their grip over the Southampton Test as they took a 114-run lead in the first innings. Despite no big knocks, the West Indies team got contributions coming in from their top order which helped them to reach 318/10. The fifties from Kraigg Brathwaite (65) and Shane Dowrich (61) played a key role in the first innings of the West Indies. The England skipper Ben Stokes was the pick of the bowlers with a 4-wicket haul before their home team ended the day 15/0 after playing ten overs.

Here are the statistical highlights from the 3rd day’s play of the Southampton Test match:

Stokes only behind Sobers:

64 – Ben Stokes became only the 6th player in Test cricket to complete the double of 4000 runs and 150 wickets in Test cricket. He is the second player to do so, thus far England after Sir Ian Botham. Stokes reached the double in only 64 Tests, the 2nd fewest by any player after Sir Gary Sobers (63 Tests). 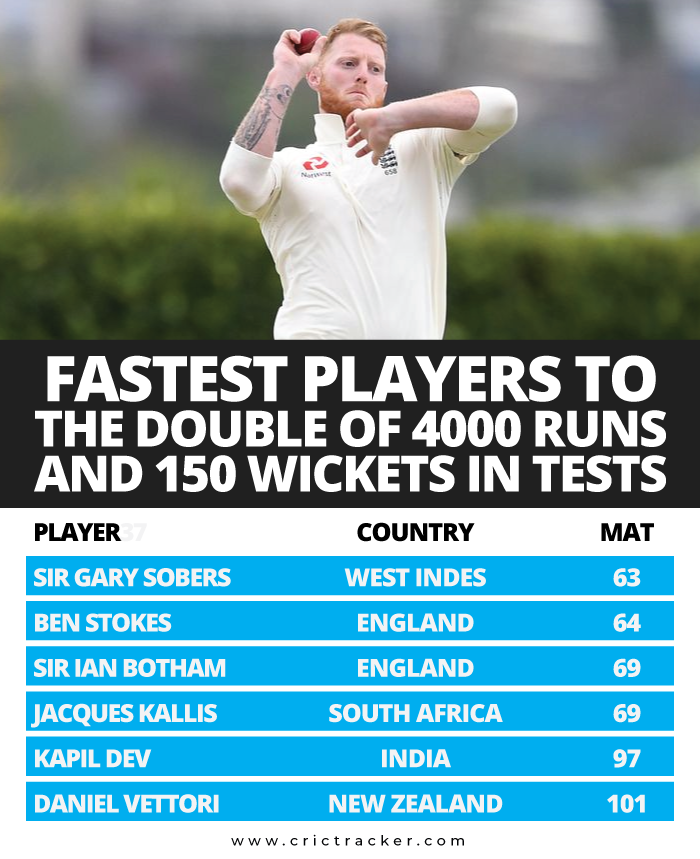 Stokes leads from the front:

4/49 – Ben Stokes’ bowling figures of 4/49 in the first innings are the best for an England captain in Test cricket since the 5/35 by Bob Willis in the 1983 Leeds Test against New Zealand. The 5-wicket haul by Willis in 1983 is also the last instance of an England skipper picking up four or more wickets in a home Test innings.

21 – The 65-run knock has helped Kraigg Brathwaite to put an end to his 21-inning streak without a 50+ score in Test cricket. His previous 50+ score came during the first innings of the 2018 Kingston Test where he scored 110 against Bangladesh. The opener aggregated 241 runs in the 21 innings between his last two 50+ scores at an average of mere 12.06.

The match of captains with the ball:

10 – As many as 10 wickets have picked by both the team captains in this game thus far – Jason Holder (6) and Ben Stokes (4). This is only the 2nd instance in Test history where as many as ten wickets in the first two innings of a Test were claimed by the captains. Fazal Mahmood and Richie Benaud picked five wickets apiece for Pakistan and Australia respectively during the 1959 Karachi Test.

19.92 – Batting average of Shai Hope in Test cricket since the start of 2018. The West Indian batsman aggregated just 518 runs in the 27 innings he batted during this period with only two 50+ scores. As many as 64 players scored over 500 Test runs in this span but only Hope averages under 20.