Ben Stokes should be the undisputed captain of your Fantasy teams.

The first Test of the three-match series between England and the West Indies will be played at The Rose Bowl in Southampton.

This match starts at 11 AM local time (3:30 PM IST) (10 AM GMT). It can be watched live on Sony Ten Network and live streaming will be available on Sony LIV.

This is a huge news for the cricket fans as international cricket is set to resume with the Test series between England and West Indies. The first of the three Tests will commence on Wednesday in Southampton. The Caribbeans arrived in England well in advance and served the mandatory quarantine period while also training during this period. They also played an intra-squad warm-up game to get used to the conditions.

Meanwhile, the hosts will miss their regular skipper Joe Root who is with his wife to attend the birth of their child. Ben Stokes is set to become England’s 81st Test captain and will be keen to lead the team to the victory in his maiden game as the skipper. Rory Burns has also returned to the top which means Joe Denly will bat at four now in place of Root. This game will be played behind the closed doors amid the Coronavirus pandemic.

The resumption of cricket is likely to be hindered by the weather in Southampton on the first two days of the Test. However, we may witness some play. Moreover, there is no chance of the rain on the last three days.

The surfaces in England are helpful for the pacers in general. There will be some swing for the fast bowlers in the first hours again on the opening. But even then the team winning the toss is expected to bat first as the history suggests.

Joe Root is set to miss this Test match. Ben Stokes will lead England in his absence.

Shannon Gabriel has been added to the West Indies squad after he proved his fitness in the warm-up match. He will most likely play this match.

Ben Stokes is undoubtedly the best player England has at the moment in the line-up. He is the captain as well and will look to lead from the front both with the bat and ball. Dominic Sibley scored 324 runs at an average of 54 in the South Africa series in seven innings. Ollie Pope is also a very good player to have at number six. He averaged 88.67 in five innings against the Proteas scoring 266 runs.

With the ball, James Anderson is the best to have while playing in England thanks to his ability to swing the ball. Even Jofra Archer is a brilliant bowler and his pace can trouble the opposition batsmen.

For the West Indies, Shai Hope is the best batsman. He played really well last time the Caribbeans travelled England and has scored 508 runs in seven Tests against them with two tons and at an average of 42.33. Kraigg Brathwaite is also a very good Test player and can play game-changing knocks when in form. Kemar Roach is close to the milestone in terms of wickets and will be raring to do well while Gabriel’s pace will also be crucial for them.

When it comes to all-rounders, Jason Holder and Roston Chase are also good picks and can make good impact on the outcome of the game. 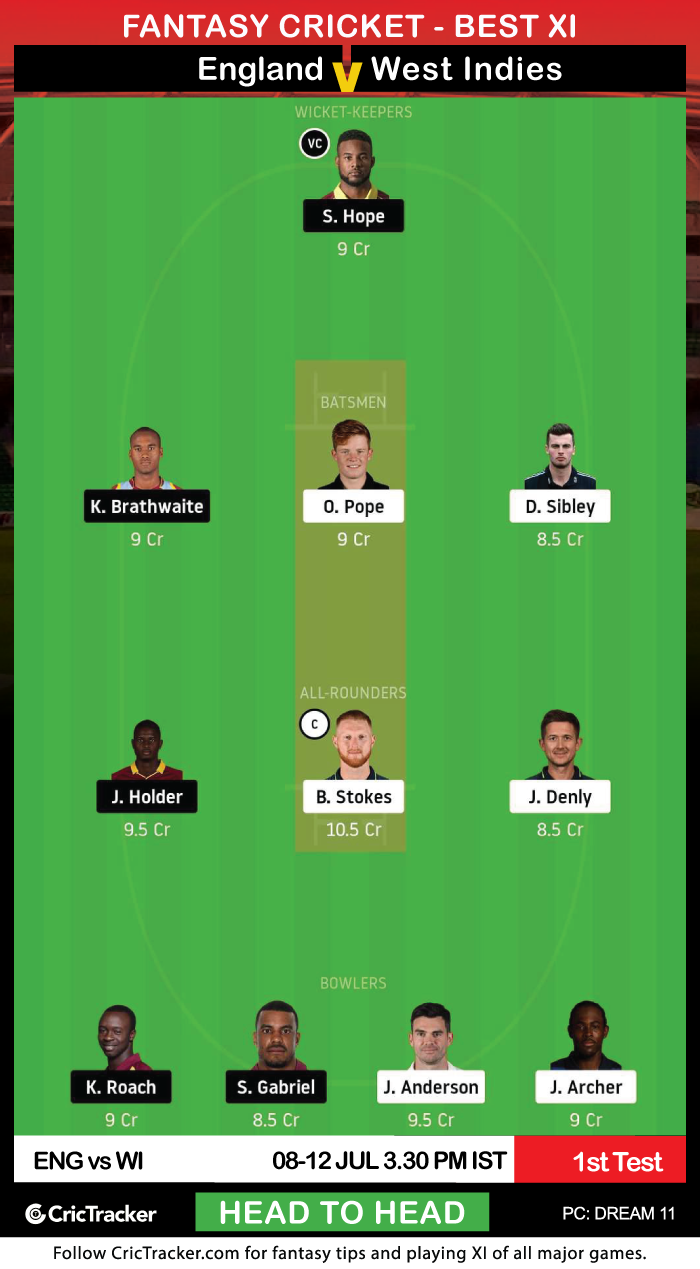 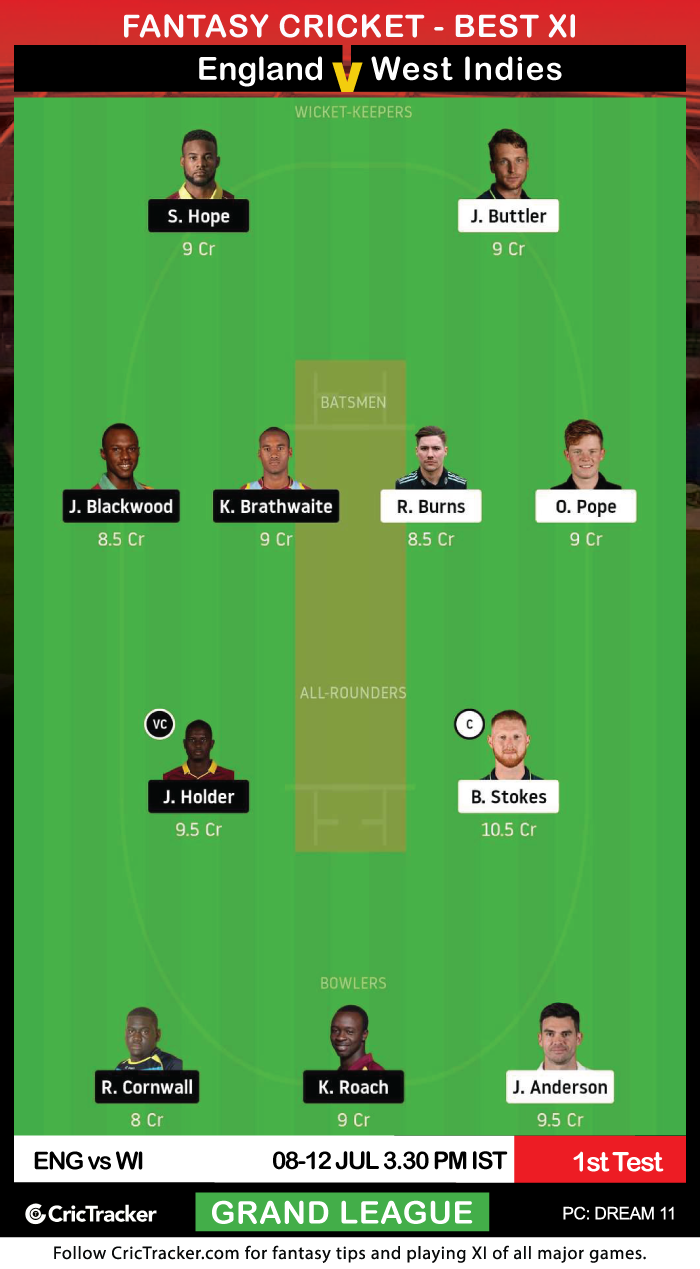 Pacers will most likely play a crucial role in England. So try and pick more pacers in the team.

Stuart Broad, as of now, is doubtful to play this game. But if he plays, then pick him as he is a wicket-taker as well.