Shubman Gill and Cheteshwar Pujara also opened up about their preparations for the series.

The Indian Cricket Team is all set to lock horns with Bangladesh in the upcoming T20I and Test series. The series will begin with a 3-match T20I concatenation which starts from 3rd November at Delhi. Bangladesh’s tour, in all likelihood, will end on 26th Nov i.e. after the conclusion of the 2nd Test. Just a couple of weeks ago, the Men In Blue have whitewashed the South African unit in the recently-concluded Test series.

The Board of Control for Cricket in India (BCCI) has recently announced the India squad for the two upcoming series. For the T20I assignment, the regular Indian skipper Virat Kohli has been rested and as a result, the team will play under the leadership of the vice-captain Rohit Sharma.

Apart from the captaincy duties, deserving inclusion of young stars like Shivam Dube & Sanju Samson also attracted lots of limelight. A few calls like a selection of Manish Pandey and Shardul Thakur raised a few eyebrows.

Meanwhile, the red-ball side didn’t have many surprise inclusions. Virat Kohli has been given the captaincy duties and Rohit Sharma, after his heroics in the recently-concluded Test series against South Africa, has also been retained in the side. Shahbaz Nadeem, who got a chance in the Ranchi Test, has been replaced by Kuldeep Yadav.

BCCI asks players about their preparation

The Indian side has defeated a decent South African team quite recently and their confidence level is high. The Test series will commence on 14th November and consists of a total of two games. In the meantime, the BCCI posted a Facebook status, wherein, it asked its players about their preparations for the upcoming endeavour.

The players replied to this in a quite strange manner. While the Indian skipper Virat Kohli, coach Ravi Shastri and vice-captain Rohit Sharma got their priorities sorted, KL Rahul also posted something which made Hardik Pandya jealous. MS Dhoni found a comment by Cheteshwar Pujara very relatable and the Bangladesh Cricket Board, thought that the players were treating him as a joke.

Here is the conversation: 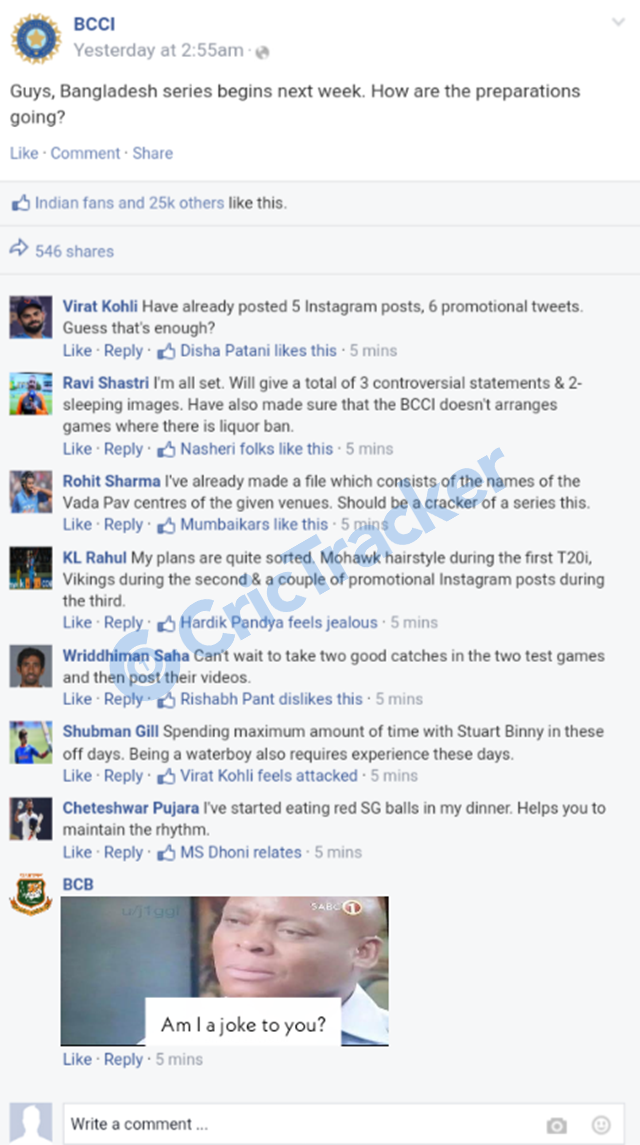