MS Dhoni opts to 'rest' instead of joining his teammates.

The year 2019 was no less than a roller-coaster ride for the Indian Cricket. The team witnessed one of its most historic victories in the same year but at the same time, there were also a few setbacks that stopped it from reaching the optimum level.

The year had begun with India defeating the Australian side in their own backyard in a Test series. Virat Kohli, leading from the front, marshalled his troops to a Test series win by 2-1 for the first time in 72 years. The Indian team then defeated the hosts in the ODI series as well.

After playing a few more such ODI series, the Kohli-led team then walked into the 12th edition of the Cricket World Cup as one of the hot favourites. The squad looked absolutely scintillating and with the help of some combined team-efforts, the side comfortably qualified for the knockouts. However, in the semi-finals, the Men In Blue choked all of a sudden and handed over a victory to mercurial-yet-consistent New Zealand in a nail-biting thriller.

This fiasco came as a major heartbreak for the Indian cricketers as well as aficionados. Since then, India has locked horns with West Indies twice and has taken on Bangladesh and South Africa once. The team has registered victories in all their bilateral series.

Virat Kohli calls for a party

Meanwhile, as the New Year was over the head and the decade inched another step closer, the Indian skipper Virat Kohli called for New Year party at his home. The 31-year-old updated a facebook status, wherein, he was seen giving information about the get-together and was asking others to join him.

In the meantime, the Indian opener Shikhar Dhawan expressed his wish of being a part of the feast, howbeit, just like his on-field career, the Karnataka-born-opener KL Rahul took his place here as well. Anil Kumble also showed his desire but once again someone else, and perhaps less deserving, was picked for his post. Eventually, the former Indian skipper MS Dhoni, like always, played safe and decided to rest instead of being a part of the gathering.

Here is the thread: 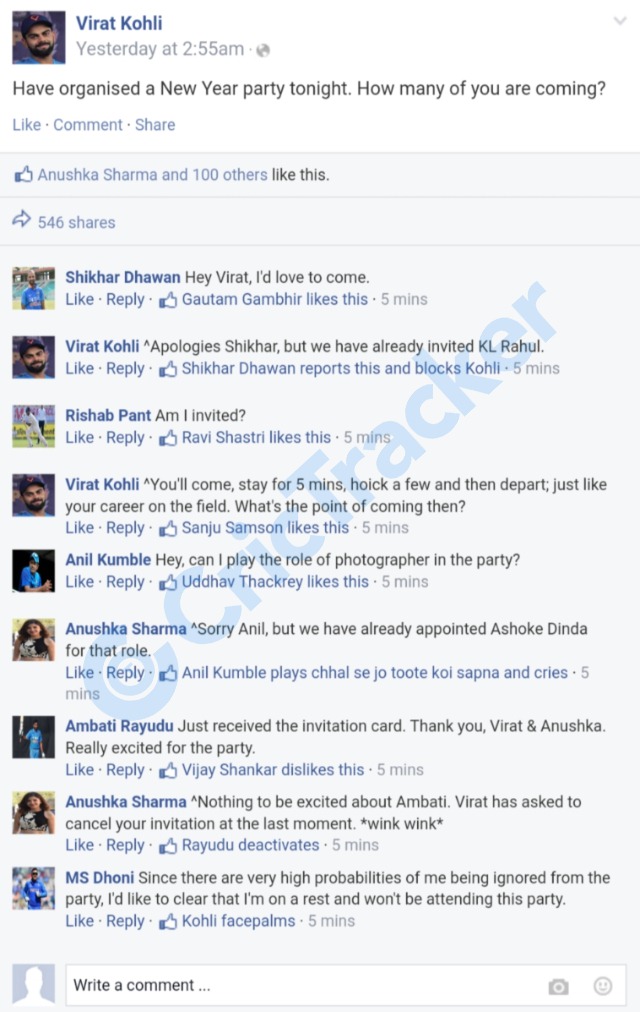