The Indian Cricket Team’s no. 4 fiasco isn’t hidden from anyone of us. Ever since the conclusion of the Champions Trophy 2017, innumerable no. of batsmen have been tried at the position, however, not a single one of them has been able to cement his position. At this point of time, Rishabh Pant and Shreyas Iyer are the lads who have been handed over the responsibility.

In the meantime, the Indian batsman Suresh Raina has also expressed his desire to make a re-entry on the no. 4 spot. The 32-year-old was once India’s ideal batsman of the position and has been quite successful as well. Although he is currently recovering from a knee injury and is out of favour, the Southpaw is expecting a comeback by the end of next month.

Raina feels that he can be back in action by this November and can hence solve the headache of the Indian selectors. In the 18 innings he has played at the coveted position, the left-handed batsman has scored 675 runs at an average of 45. He has also scored a total of 6 half-centuries and a ton. He made his last appearance in the Indian pullover in July 2018 against the English side. One of the main reasons behind Raina’s exclusion from India’s upcoming plans is his fitness and age which has become a cause of concern for him as well as the team.

Nevertheless, in a recent interview, Suresh Raina said that he would love to make a comeback in the Indian blues and is fit enough to play at the number 4 position. “I can be the No. 4 for India. I have batted in that slot before and delivered. I am looking forward to an opportunity with two T20 World Cups coming up,” the 32-year-old was quoted saying by The Hindu.

Howbeit, this statement by Suresh Raina didn’t get a positive response. Many people felt that he was out of the scheme and the team management shouldn’t go back to him. Meanwhile, Raina also posted a Facebook status regarding this topic on his official handle. This resulted in many cricketers dreaming some of the most impossible things.

Here is the response to his fake Facebook status: 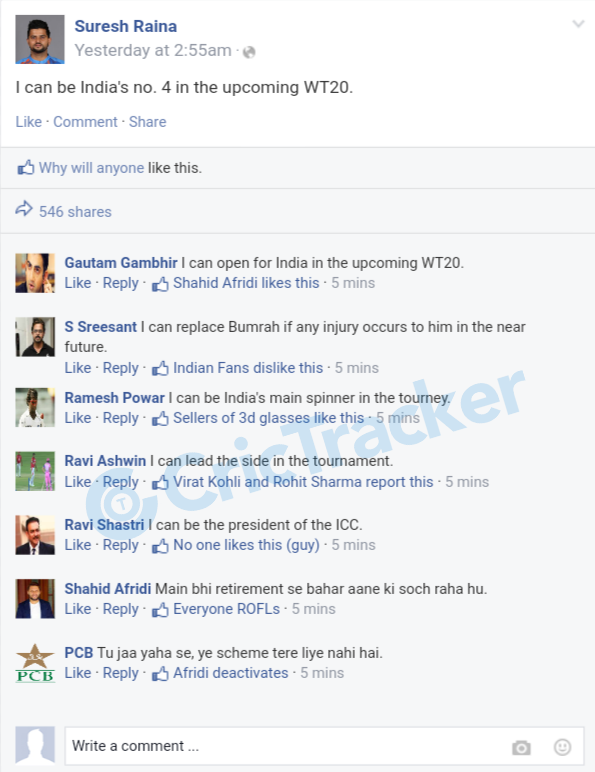