Flashback: When the pugnacious Pathans guided India to an emphatic victory

Flashback: When the pugnacious Pathans guided India to an emphatic victory

Needing 5 from 6, the junior Pathan smoldered Malinga into the crowd in the final over as a delighted Indian dressing room erupted in joy. The brothers did it. 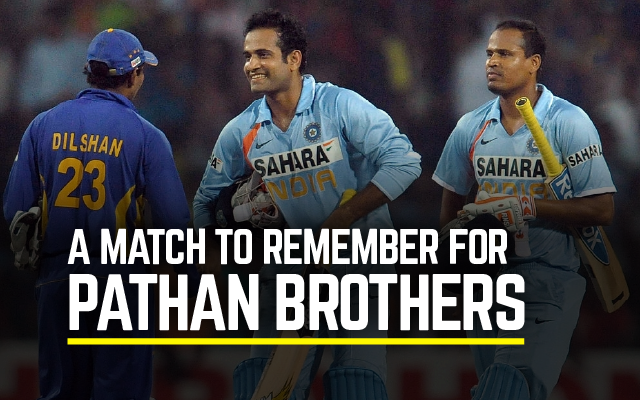 After defeating Sri Lanka 4-1 in their backyard in the five-match ODI series, India locked horns with them in the only T20I at Colombo on February 10, 2009. Having elected to bat first, the hosts posted a healthy total of 171/4, thanks to a 47-ball 61 from skipper Tilakaratne Dilshan, who thoroughly dominated the Indian bowlers alongside Sanath Jayasuriya (33 from 17)

The destructive duo scored runs at a brisk pace, adding 59 for the opening stand before Irfan Pathan got Jayasuriya caught by Ishant Sharma at mid-on. The breakthrough led to some halt in the scoring as Jehan Mubarak failed to get moving, however, Dilshan kept his foot on the accelerator nevertheless. India introduced spinner Yusuf Pathan and Ravindra Jadeja into the attack, and struggling to find his rhythm, Mubarak lobbed a simple return catch to the former.

Pathan struck once again, this time to remove Kapugedara, who gave a simple catch to Virender Sehwag, leaving his side 107/3. While Sri Lanka looked well on the path of reaching closer to the 200-run mark, Ishant Sharma quashed those chances by getting Dilshan caught by Raina in the 17th over before the late flourish from the Chamaras – Kapugedara (16) and Silva (21) guided them to 171/4.

In response, disaster struck for India when Virender Sehwag lost his wicket to an unfortunate run-out. India was jolted in no time again as Gautam Gambhir perished to Thusara for 13. Suresh Raina, who hit five boundaries and a six in his 27-ball 35, joined forces with Yuvraj Singh, 32 from 21 with three fours and two sixes, to steady India’s ship through a 67-run partnership for the third wicket.

The visitors were cruising towards victory but things changed rather quickly and India looked all lost, losing wickets in heaps as Jehan Mubarak inflicted a collapse, dismissing Yuvraj Singh. Malinga Bandara, who finished 3/32, then dismissed Suresh Raina in the following over before cleaning up both MS Dhoni and Ravindra Jadeja.

Needing 57 from 29 after being reduced to 115/7 from 81/2, India had their eyes fixed on brothers Yusuf and Irfan Pathan. What followed was an exhibition of some clean hitting as the elder Pathan smothered Bandara for 4, 6, dot, 6 in the momentum-shifting 16th over. The 17 crucial runs did not seal the game but were certainly enough to ease all the pressure that Sri Lanka had managed to create.

Irfan Pathan came into his elements in the penultimate over, whacking Fernando for a six followed by a four, to bring the equation down to 5 needed from 6. He smoldered Malinga into the crowd in the final over as a delighted Indian dressing room erupted in joy. The brothers did it.