The 28th match of the Ford Trophy 2020-21 will be played between Wellington Firebirds and Otago Volts on 28th February at Basin Reserve in Wellington.

Wellington Firebirds will go head-to-head against the Otago Volts for the second consecutive time in the 28th match of the Ford Trophy 2020-21 on Sunday. After losing their previous match against Otago Volts by 6 wickets in the final over, Wellington Firebirds are in a must-win situation. They need to win by a quite a large margin and also hope for favourable outcomes elsewhere to qualify for the knockouts. With 4 wins and 4 losses, they are at the fifth position in the standings with 18 points.

On the other hand, Otago Volts are also in the same boat, and a win is essential for them to make it to the knockouts. They chased down the mammoth total of 341 runs against Wellington Firebirds in their penultimate league match to stay in the hunt for the knockout qualification. Hamish Rutherford and Anaru Kitchen were the match winners for Otago Volts in their previous match. With this win, they moved to the third spot in the standings with 20 points. Since only Canterbury has cemented their spot in the finals and 4 other teams will be battling for their place in the Preliminary Finals, it is going to be a thrilling contest between the two sides.

It is going to be mostly cloudy in Wellington with the temperature ranging between 21 and 23 degrees Celsius and the humidity will be 74 percent. There is no forecast of rain for this match.

The wicket looked pretty good for batting on Friday when these two teams played, with 680 plus being scored in a match. The pitch is expected to remain the same for the Sunday match as well and bowlers need to be on top of their game to control the run-flow. Chasing will be easier at this venue.

244 (last 3 matches of this tournament played on this venue)

Also Read – India vs England: Rory Burns reprimanded by ECB for his Twitter clash with a female cricketer

Michael Bracewell played important innings in the previous match against the Otago Volts and registered his highest score in this tournament, scoring 82 runs at a strike of 94.25. Overall in 6 matches, he has scored 294 runs at an average of 58.8, which includes 4 half-centuries.

Troy Johnson played captain’s knock in the previous game against Otago Volts, scoring 58 runs at a strike rate of 111.54. He is the leading run-scorer for his side with 341 runs in 8 matches at an average of 48.71, including one century and 3 half-centuries.

Peter Younghusband is the pick of the bowlers for Wellington Firebirds in this tournament, with 13 wickets in 7 innings at an economy of 4.76 runs per over and a best bowling figure of 3/42.

Hamish Rutherford scored an incredible 102 runs from 91 balls in the run-chase against Wellington Firebirds, which eventually helped his side to win in the end. So far in this tournament, he has scored 274 runs in 6 matches at an average of 45.6.

Neil Broom, the International capped player, batted well in the previous match against Wellington Firebirds scoring 55 runs in 57 balls. He is fifth in the list of most runs-scorers with 319 runs in 9 matches at an average of 39.87.

Anaru Kitchen was the match-winner for Otago Volts against Wellington Firebirds. He remained unbeaten on 72 runs from just 46 balls and won the game for his side with 5 balls to spare and he even picked up 2 wickets as well. Overall in this competition, he has scored 226 runs and picked up 13 wickets.

Also Read – India vs England: Jasprit Bumrah released from the squad ahead of fourth Test 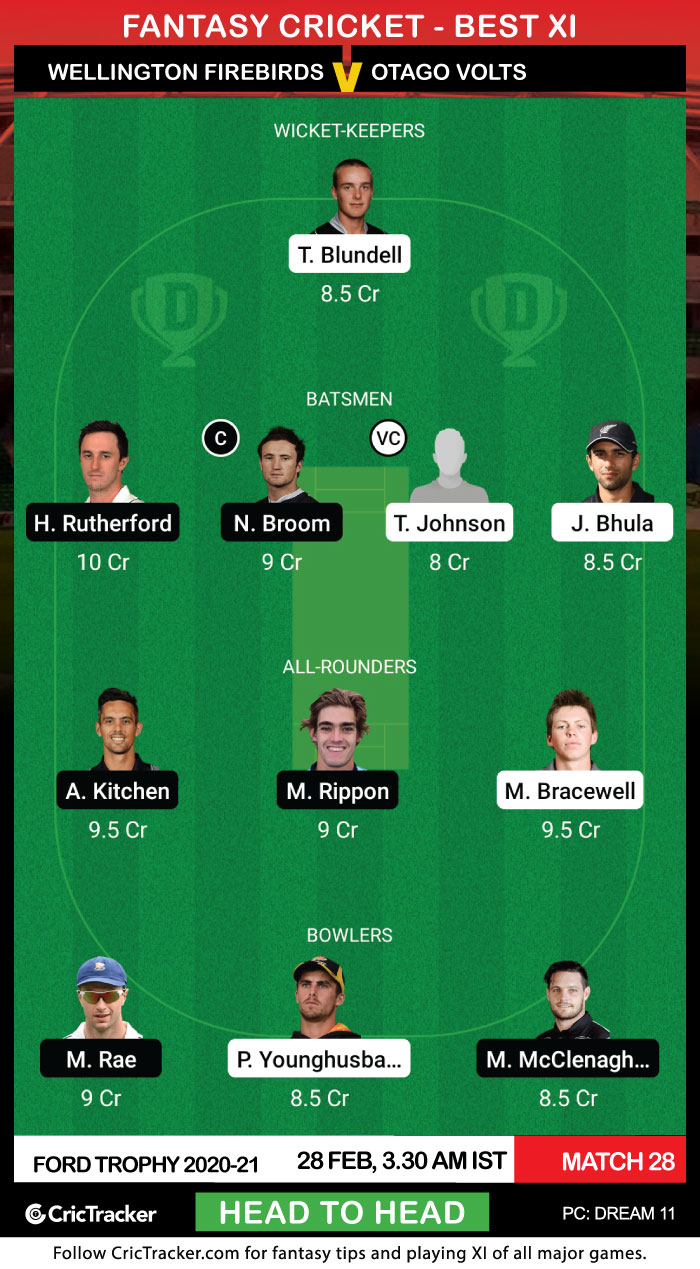 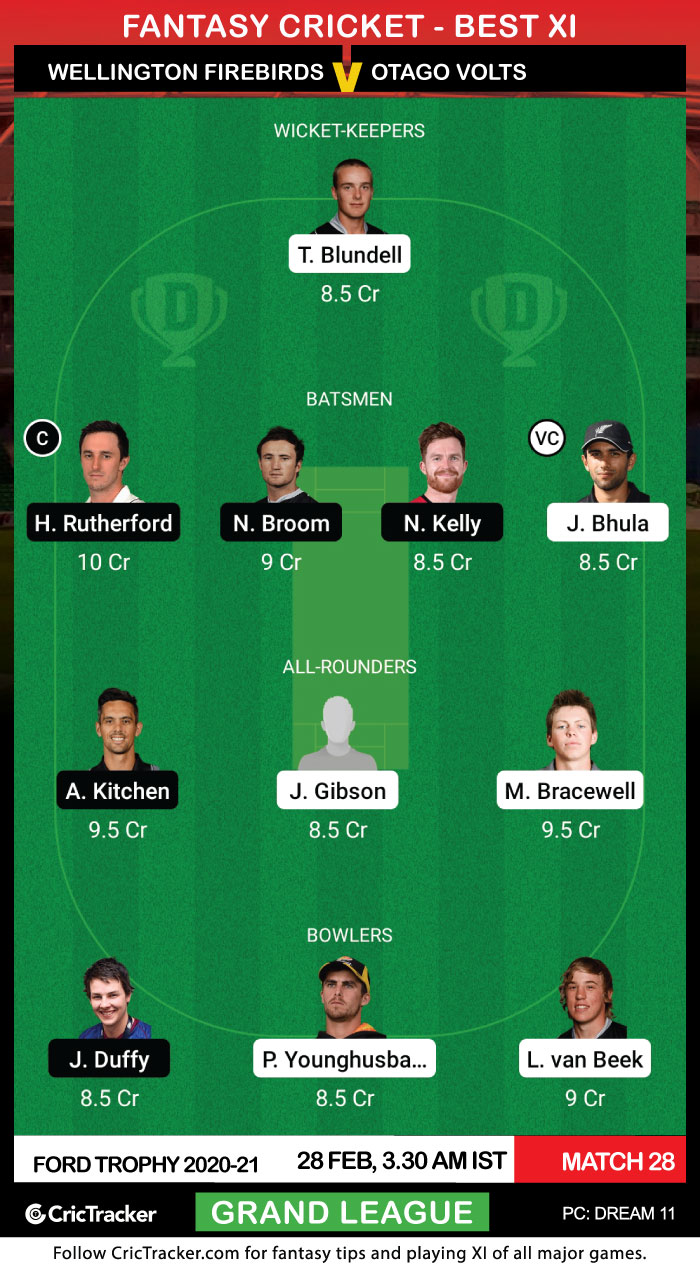 Anaru Kitchen will be an X-factor for Otago Volts. He has been influential with both bat and ball, having scored over 200 runs and picked up 12 wickets. Kitchen your Dream11 fantasy team.