Shahrukh Sheikh: A Captain & all-rounder all set to avenge the defeat during the D10 Tournament, Sheikh will get two chances to impact the game. After getting the captaincy of Dubai from Mohd Rashid, Shahrukh would be looking to make his presence felt in the tournament. He has a brilliant strike rate of 157 and is also very handy with the ball.

The 4th match of the Emirates D20 tournament 2020 will be played at the ICC Academy, Dubai between the Fujairah Pacific Ventures & Dubai Pulse Secure on Monday.

The live streaming of the match is scheduled to begin at 2:30 pm IST on FanCode.

The last time these two teams played here at the D10 tournament earlier this year, it was Captain Waseem Muhammad’s innings of 44* from just 23 deliveries that sealed the deal for the Ventures in the very last over. For the Dubai Pulse team, it was Ibthisam Sait who was cruising to his 50 before he was dismissed for 46 off just 23 deliveries in the 1st innings. He had truly set the game up and Dubai will miss him as Shahrukh Sheikh will be the new Captain in charge.

Players like Usman Khan & Waseem from Fujairah looked in great touch vs Sharjah a fortnight ago along with opener Rohan Mustafa. So expect a big total or a brisk run chase whenever these 3 get a chance to bat.

Yet another sunny day mostly with the temperature around the 27 degrees mark along with only 5% chances of rain. The humidity of 57% but it’s the wind that will come into play considering the 24% mark.

As we have seen over the years, a little hint of movement but all in all a very flat track that helps the ball come on to the bat. Dew factor in the UAE is always a player so expect some help for the spinners too. Expect some help for the bowlers as it tends to be on the slower side but because of the weather, the batsmen will not be disappointed either.

Adnaan Khan(WK): The Dubai wicket-keeper boasts of a massive strike rate of 205 and in the D10 tournament scored 273 runs in the 10 innings that he had played. Adnaan likes to take on the bowling from the start itself so he would be valuable to his team in the powerplay.

Usman Khan: After his fiery half-century off just 33 balls against Sharjah in the first match, Usman Khan would like to continue his great form against Dubai as well. The specialist batsman looked very comfortable with the conditions so it won’t be a problem for him to go against a comparatively weaker bowling attack.

Waseem Muhammad: Waseem looked really good at the top for his team in the game against Sharjah as he scored a solid 34. The last time these 2 teams met in the D10, Waseem turned out to be the game-changer scoring 44* off just 23 balls sealing the deal for Fujairah.

Shahrukh Sheikh: A Captain & all-rounder all set to avenge the defeat during the D10 Tournament, Sheikh will get two chances to impact the game. After getting the captaincy of Dubai from Mohd Rashid, Shahrukh would be looking to make his presence felt in the tournament. He has a brilliant strike rate of 157 and is also very handy with the ball. 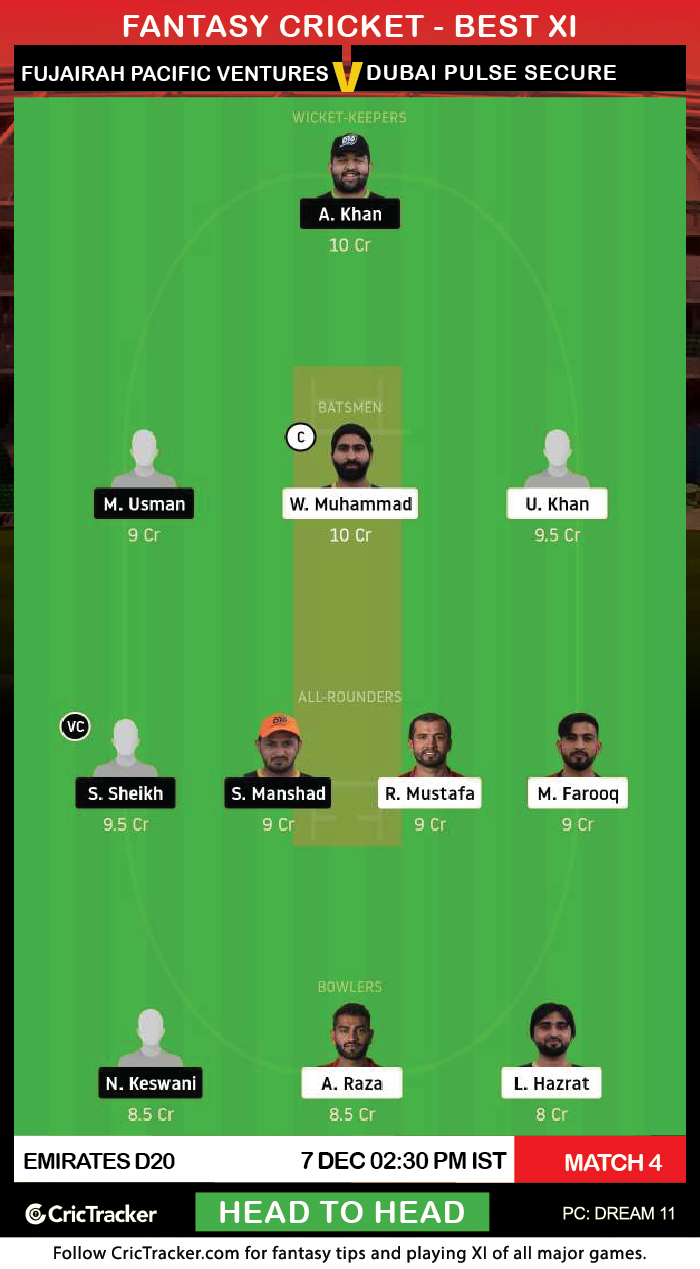 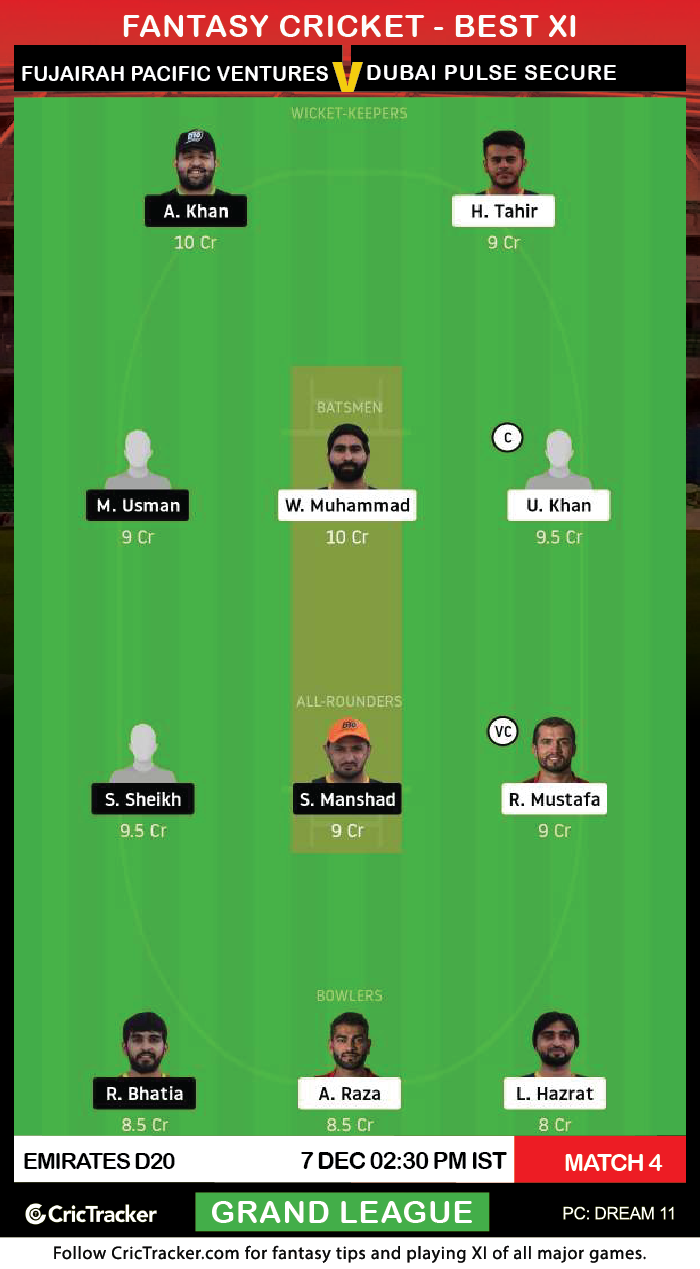 Keep an eye on the toss and edit your team accordingly. Pick more players from the team batting 1st as the pitch has not been favouring the teams that are chasing the total.

Fujairah Pacific Ventures are expected to win this match