The Kings will be high on confidence after their Super Over win over Kandy Tuskers.

Colombo Kings were in all sorts of trouble in their first match against the Kandy Tuskers while chasing a mammoth 220 in their 20 overs. However, some gutsy efforts were from Isuru Udana took the match into the Super Over.

Even in the one-over eliminator, Udana bowled well to take his team over the line. However, going into their next game, they will be looking to fill quite a few loopholes. Their next match is against the Galle Gladiators at the Mahinda Rajapaksha International Stadium at Hambantota in the second of Saturday’s doubleheader.

The Gladiators, on the other hand, were competitive in their opening match against Jaffna Stallions. Shahid Afridi and Co had to fight hand, and in the end, Avishka Fernando’s efforts handed them a defeat in their first game of LPL 2020.

The pitch in Hambantota has been an absolute belter for batting. The bowlers may not have much in it for them and have to rely on the change in pace and hitting the right channels. Moreover, in the second half of the game, the dew factor will come into play.

So, chasing should be the way forward for the teams. There are chances of rain, but the skies are expected to stay clear during the game.

Playing Combinations for GAL vs COL

Danushka Gunathilaka plays for Sri Lanka at the international level. He opens the batting and plays his strokes freely. Even in the previous game, he was looking at his very best.

The southpaw managed 38 runs off 30 balls with the help of seven fours, and he played at a strike-rate of 126.67 before getting out to Wanindu Hasaranga. The Gladiators would want him to play another decent knock.

Dinesh Chandimal isn’t someone, who goes for ambitious strokes. The right-hander knows to blend caution with aggression and take calculative risks. It was evident from the way he played in the opening match.

Though his team lost the game, Chandimal kept them in the hunt throughout the match. He scored 80 runs off 46 balls with 12 fours and two sixes before getting out to Naveen-ul-Haq. 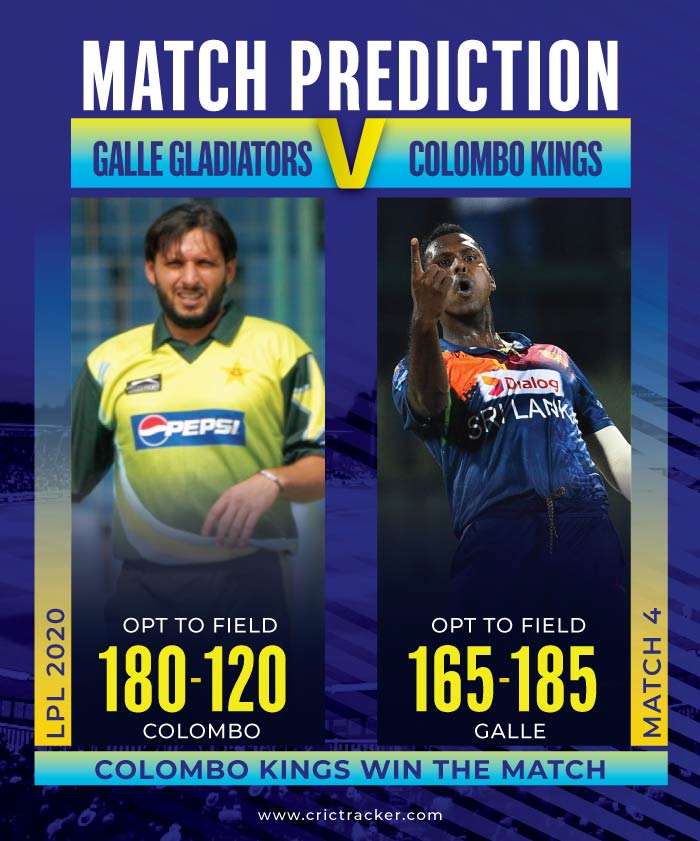