Arlene Kelly is an all-rounder and has played at number 3 for Auckland Women but she been listed in the bowler's category. She should be included in any one of your Dream11 Fantasy teams.

The 23rd match of the Hallyburton Johnstone Shield 2020-21 will be played between Wellington Blaze Women and Auckland Hearts Women on 21st February at Karori Park in Wellington.

Wellington Blaze Women and Auckland Hearts Women will square off against each other for the second consecutive time in the 23rd match of the Hallyburton Johnstone Shield 2020-21 on Sunday. Wellington Blaze Women were thrashed by the Auckland Hearts Women by 110 runs. Despite Jessica Mcfayden’s knock of 75, they could hardly pose a challenge. But they will take a lot of positive out of this match and will be back in action again on Sunday against the same opposition. With 5 losses and 2 wins, they are placed at the fifth position in the standings with 9 points to their name.

On the other hand, Auckland Hearts Women wrapped up a convincing victory against the Wellington Blaze Women in their previous match. They were on top of their game and outplayed the opposition in every department of the game. They will be ready to hand another defeat for the Wellington Blaze Women. They were too good in the first half of the tournament, winning 4 of their 6 matches. They are currently placed 3rd in the standings with 24 points.

It’s going to be cloudy in Wellington on Sunday, with the temperature ranging between 18 and 20 degrees Celsius and the humidity will be 73 percent. There is no chance of precipitation for this match.

The pitch looks good for batting and it’s conducive for the bowlers also. It may tend to slow down a little in the second half of the match. Chasing above 250 is always hard on this venue, but it’s not impossible though. Anything between 260-270 is a good competitive score.

285 (Considering one match of this tournament played on this venue)

Even though Wellington Women’s form is not been the greatest, it doesn’t make any impact on Jessica McFadyen’s form, as she continues to impress her batting display in this tournament. She has scored 319 runs in 7 matches at an average of 63.8.

Wellington Blaze’s skipper Thamsyn Newton bowled really well against Auckland Hearts. She got the important wickets of Lauren Down, Arlene Kelly, and Holly Huddleston. Overall in this tournament, she has scalped 7 wickets and has scored 148 runs with the bat.

Auckland Hearts’ skipper Lauren Down was excellent with the bat in the previous match against the Wellington Women, scoring 69 runs at a strike rate of 87.34. Overall in this tournament, she has scored 150 runs in 5 matches at an average of 30.

Katie Perkins is the leading run-scorer for Auckland Hearts Women in the ongoing competition. She has scored 182 runs in 5 innings at an average of 45.5, with the highest score of 63. She got the start against the Wellington Women but got dismissed for 30 runs.

Coming at number 8, Jesse Prasad added crucial 36 runs from her willow in just 28 balls. In this competition, she has scored 64 runs in 6 innings and with the ball, she has scalped 9 wickets at an excellent economy of 3.21 runs per over with the best figures of 2/0. 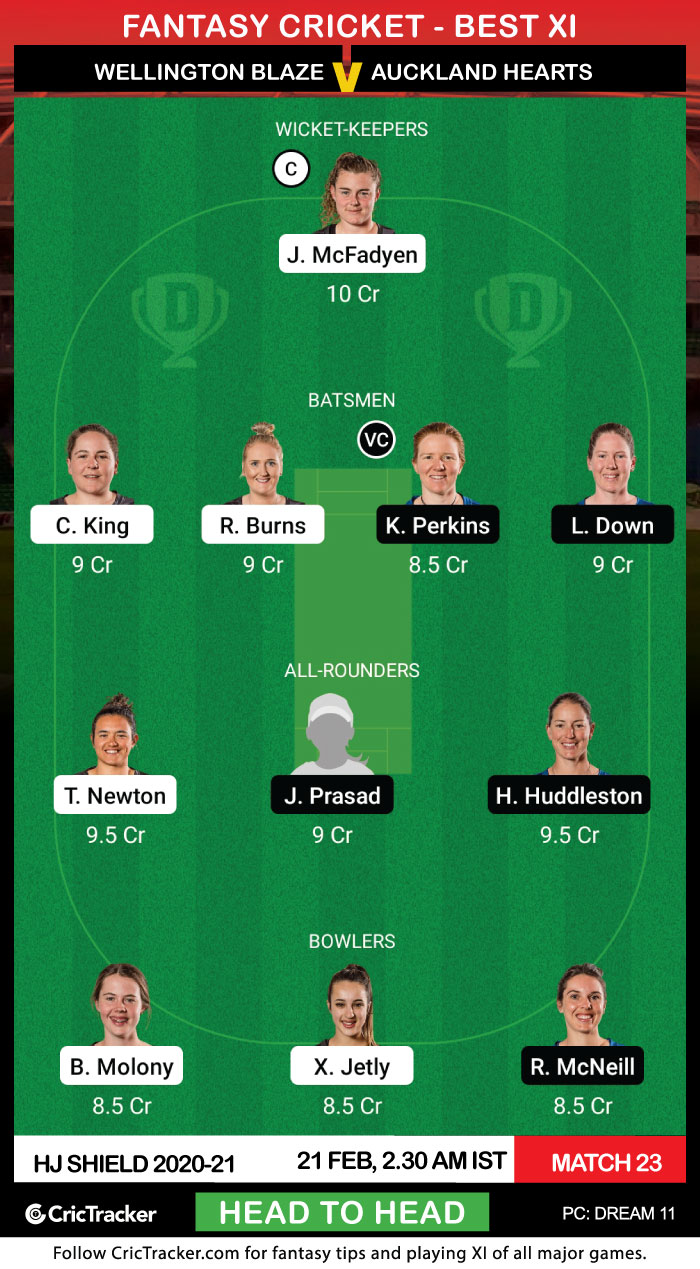 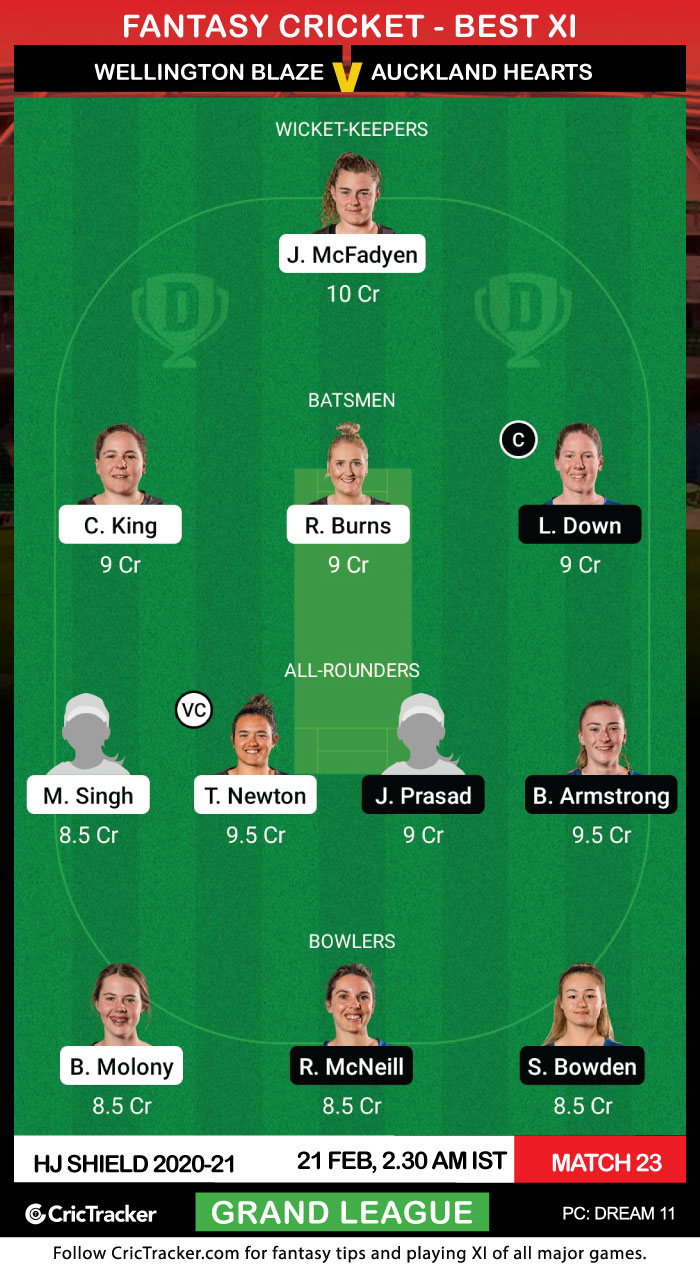 Arlene Kelly is an all-rounder and has played at number 3 for Auckland Women but she been listed in the bowler’s category. She should be included in any one of your Dream11 Fantasy teams.

Auckland Hearts Women are expected to win this match.