Dhoni is not much active on social media, but keeps his fans posted with his interesting updates.

Former India skipper MS Dhoni is renowned for his famous replies on social media which are all witty and classy at the same time. Apart from his street-smartness and lightning-quick hands during his time with Team India, he is also active on Twitter and has a memorable time with his fans on the microblogging site.

During his famous interactions with fans, the 39-year-old encountered various people who used to ask him a plethora of questions ranging from his diet to his fascination for bikes and pet animals. However not everything is always rosy, and the former wicketkeeper-batter too had to face a few fans, who always used to troll him for his bad performance or for his poor batting in some games.

Dhoni being Dhoni, gave a sassy reply to the tweet, “@beingashu79 @msdhoni The only person to whom a woman listens is a photographer with open mouth” but only after giving her input, this is funny,” Dhoni had tweeted on July 17, 2012. 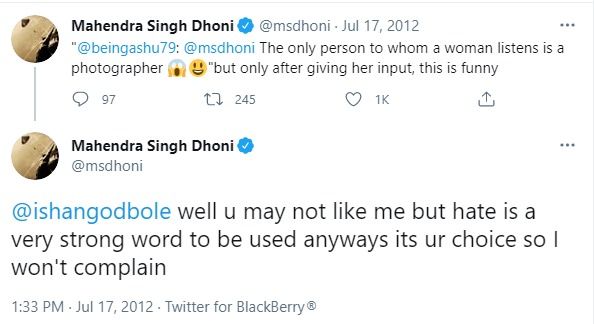 Taking cognizance of the tweet, the user had shared a very unresponsive and mean post about the former India skipper. “I hope @msdhoni knows there are many ppl who hate him. I am one of them,” the internet troll had said in his post at the time.

While many fans were baffled by the bizarre remark, Dhoni took the matter into his own hands and schooled the user for making a loose comment. “@ishangodbole well u may not like me but hate is a very strong word to be used anyways its ur choice so I won’t complain,” Dhoni had said in his reply.

In fact, Dhoni also shook the cricketing fraternity by announcing his retirement from international cricket by sharing an Instagram post with the song ‘Main pal do pal ka shayar hoon’ in the background. In over the three-minute video, the former wicketkeeper-batter shared his most memorable moments with team India.

The Jharkhand-born Dhoni’s last tweet came on January 8 earlier this year. He has eight million followers on Twitter, while he is followed by 33.1 million users on Instagram.