England's Dawid Malan has joined the Hurricanes and is likely to open the batting with D'Arcy Short.

Hobart Hurricanes, after two wins in their first two matches, lost to the Adelaide Strikers in Launceston but got back to winning ways with the six-wicket win over the Melbourne Renegades. With 11 points from four matches, they are standing pretty in the top half of the points table.

Their next match is against the Brisbane Heat on Sunday, December 27 at the Gabba in Brisbane. Going by history, the Hurricanes have beaten the Heat in 10 out of six matches. At the Gabba, the head-to-head record is 4-4.

In the meantime, the Hurricanes have added England’s Dawid Malan to their squad in place of Will Jacks. As far as the Heat are concerned, they are placed at the bottom with three defeats on the trot. In their last game, they lost to the Adelaide Strikers by two runs.

The pitch in Brisbane has, historically, been a good one for batting. In the first game, it didn’t show a whole lot of demons though the Heat had a tough time while batting. Batting first should be the way forward.

Playing Combinations for HEA vs HUR

Mujeeb Ur Rahman has been a revelation from his teenage days with his wicket-taking abilities. In 126 T20s at the age of 19, the off-spinner has picked up 132 wickets at an economy rate of 6.67.

In the BBL, he has 16 wickets from 20 matches at an incredible economy of 6.15. The onus will be on him to keep the batters in check. Not to forget that he can also play the big shots lower down the order.

Dawid Malan’s inclusion bolsters the Hurricanes’ batting to a significant extent. The left-hander recently got an uneaten 99 against South Africa in Cape Town and has looked in ominous touch.

A veteran of 213 T20 matches, Malan is set to open the batting with the left-handed D’Arcy Short. The fact that he has five centuries in the shortest format shows how destructive he can be. 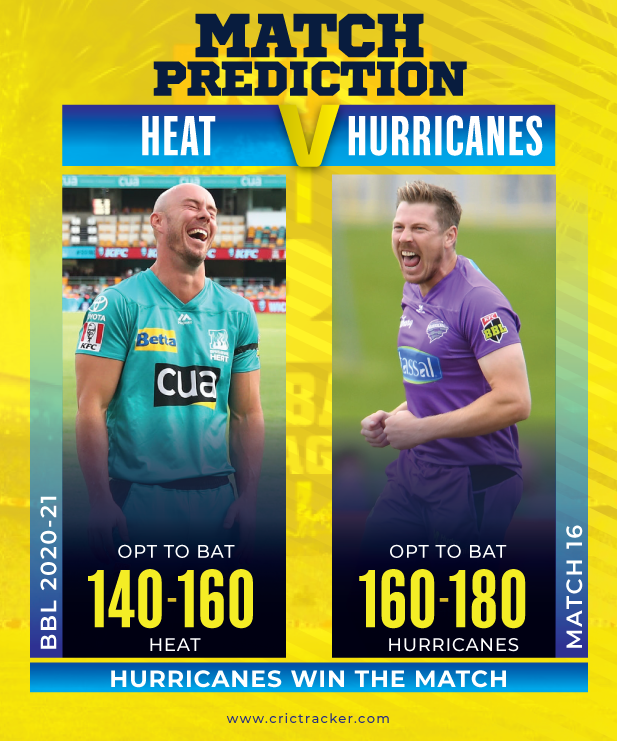