Even though the Bangladesh side has lost both the matches in the ongoing ODI series against New Zealand, the Tamim Iqbal-led side still occupies 2nd place in the table.

Fortunes can change in sport in a jiffy. The game is not over till the end. There are many cliches like this that remind us about the unpredictability of any sport. And, all these clinches would have been perfectly applicable on 23rd March 2021, as India staged an incredible comeback to beat England by 66 runs in the first ODI.

A classy 98 from the willow of Shikhar Dhawan and an emotion-filled 31-ball 58* from Krunal Pandya helped the hosts put up a competitive total of 317/5 in their allotted 50 overs. But then, the England openers came out and gave an absolute hammering to the Indian side. Jason Roy and Jonny Bairstow put on a murderous 135-run opening stand off just 14.2 overs, and it looked as if England would wallop India.

But then, a spirited Indian side staged a spectacular comeback. England collapsed sensationally from 135/0 to 251 all out, as India drew first blood in the ODI series. Now, let us look at the larger scheme of things. A victory in the first ODI now means that the Indian side occupies 8th place in the ICC World Cup Super League points table.

We also have a three-match ODI series going on, between New Zealand and Bangladesh. And, the Black Caps have registered a victory in the first 2 ODIs over the Bangladesh Tigers, and have amassed 20 points from two games in the World Cup Super League.

Even though the Bangladesh side has lost both the matches in the ongoing series, the Tamim Iqbal-led side still occupies second place in the table, having won three out of the five games that they have played in the league. Let us take a look at the updated ICC World Super League points table as of 24th March 2021. 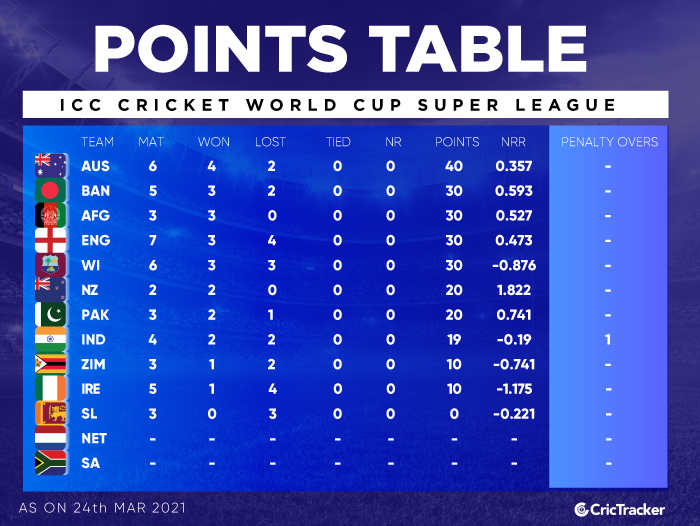