With this sensational victory over the Bangladesh side, Babar Azam’s men have moved to second place in the WTC points table.

With rain affecting play continuously in the Test match, Pakistan batted first and posted a total of 300/4 on the board. Their skipper Babar Azam top-scored with a classy 76. In reply, Bangladesh succumbed to the guile and magic of Sajid Khan.

The right-arm spinner picked up 8 wickets in the first innings, as the hosts were bowled out for just 87. Bangladesh were asked to follow on and were shot out for a total of 205 in the second essay. Bangladesh were reduced to 25/4 in the second innings, but the troika of Mushfiqur Rahim, Shakib Al Hasan, and Liton Das took the fight to the opposition.

While Mushfiqur and Das scored 48 and 45 respectively, Shakib scored a patient 63. However, Bangladesh were bowled out just a few minutes before close of play.

How does the WTC table look like after Pakistan’s win over Bangladesh?

Now, with this sensational victory over the Bangladesh side, Babar Azam’s men have moved to second place in the World Test Championship (WTC) points table. The WTC table is topped by Sri Lanka, who thrashed the West Indies 2-0 recently. 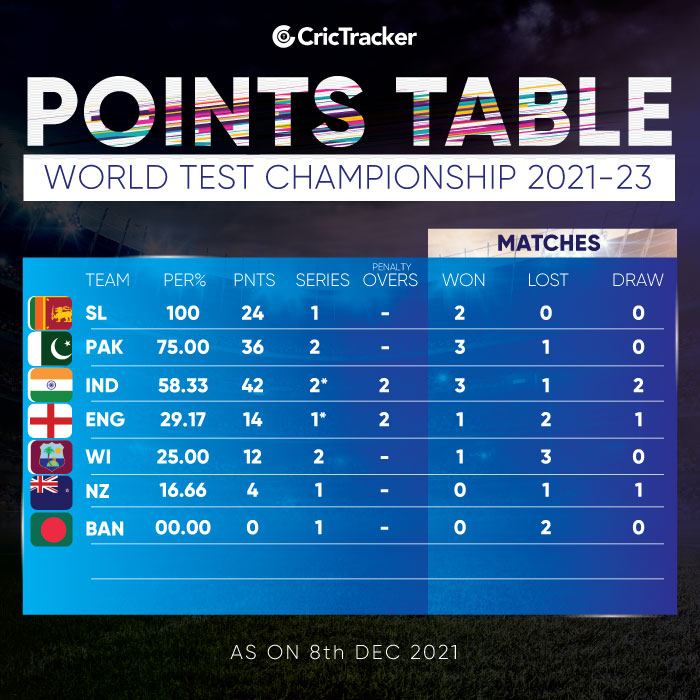