West Indies are placed at the 4th spot in the WTC points table.

Sri Lanka drew first blood in their two-match Test series against the West Indies, winning the first rubber by a whopping margin of 187 runs at Galle. The hosts dominated the Test match right from the start, as the visitors ran out of answers to the questions posed by the Sri Lankan outfit.

In the first innings, Sri Lanka posted a commanding total of 386 on the board, with their skipper Dimuth Karunaratne leading from the front with a classic 147 off 300 deliveries. Apart from Karunaratne, Dhananjaya de Silva also scored a 95-ball 61 as well.

In reply, the West Indies could only manage a total of 230. Not even a single West Indian batsman scored a half-century for the visitors. Praveen Jayawickrama was the star performer for the Sri Lankan side with the ball and scalped 4 wickets.

In the second innings, Sri Lanka declared with their scorecard reading 191/4. Karunaratne once again decimated the opposition bowling attack and helped himself to a superb 83. The West Indies produced an abysmal performance with the willow in the second innings and were reduced to 18/6.

But then, Nkrumah Bonner and Joshua Da Silva indulged in a rescue act and put on a partnership of 100 runs for the 7th wicket. However, after that, the West Indies crumbled and were bowled out for 160, as Sri Lanka completed the demolition job. Ramesh Mendis scalped a five-wicket haul in the second innings.

Dimuth Karunaratne won the Player of the Match award for his sensational performance with the willow in both innings of the Test match. With this victory, Sri Lanka are now occupying the top spot in the World Test Championship (WTC) points table. West Indies, on the other hand, are placed at the 4th spot. 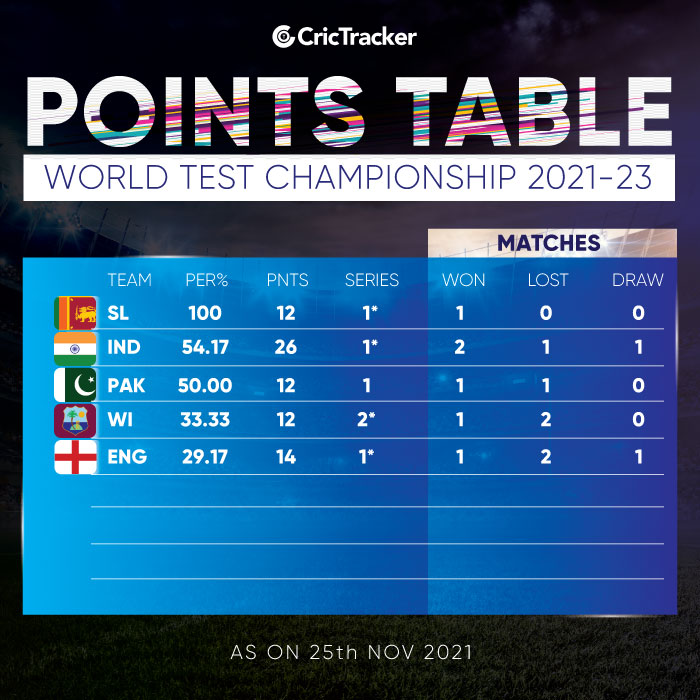