New Zealand defeated Pakistan in the first of the two-match Test series.

New Zealand defeated Pakistan in the first Test of the two-match series on Wednesday. The visitors resisted the day well with Fawad Alam scoring a stunning century and skipper Mohammad Rizwan also hanging around with him. But the latter’s wicket in the final session opened the floodgates for New Zealand as they wrapped up the innings with only 4.3 overs left in the day to register a thrilling win.

This win also keeps the Kiwis in sight of the top two positions in the World Test Championship. They have won six matches out of 10 in the WTC and are currently at the third position having pouched 66.7% of the points on offer. The Kane Williamson-led side has so far earned 360 points after winning six matches and a win in the second and final Test will take their % of points to 70 keeping them in the hunt to make it to the final.

Meanwhile, Pakistan’s hopes are dented ever further after yet another loss. They are at the fifth position in the WTC points table with only two wins from nine matches having lost four and drawn three. They have earned only 34.6% of points on offer so far and will be looking to improve on that aspect with a win in the second Test.

All eyes on AUS vs IND Test series

New Zealand will have one eye on the ongoing Test series between India and Australia. Both the teams have won a game each and the Kiwis will be hoping for one of the teams to win the series by 3-1 now for their PCT to come down below 70. Team India, led by Ajinkya Rahane, staged a stunning comeback after losing the Adelaide Test and they have a total of 390 points to their name, 72.2% of points on offer.

Australia, on the other hand, lost the Melbourne Test and four points were also deducted from their tally for poor over-rate. They are still at the top but will have to make sure that they don’t lose any of the two upcoming Test to retain their number uno position. Australia have won 8 matches in WTC and lost three while drawing one with their PCT reading 76.6%. 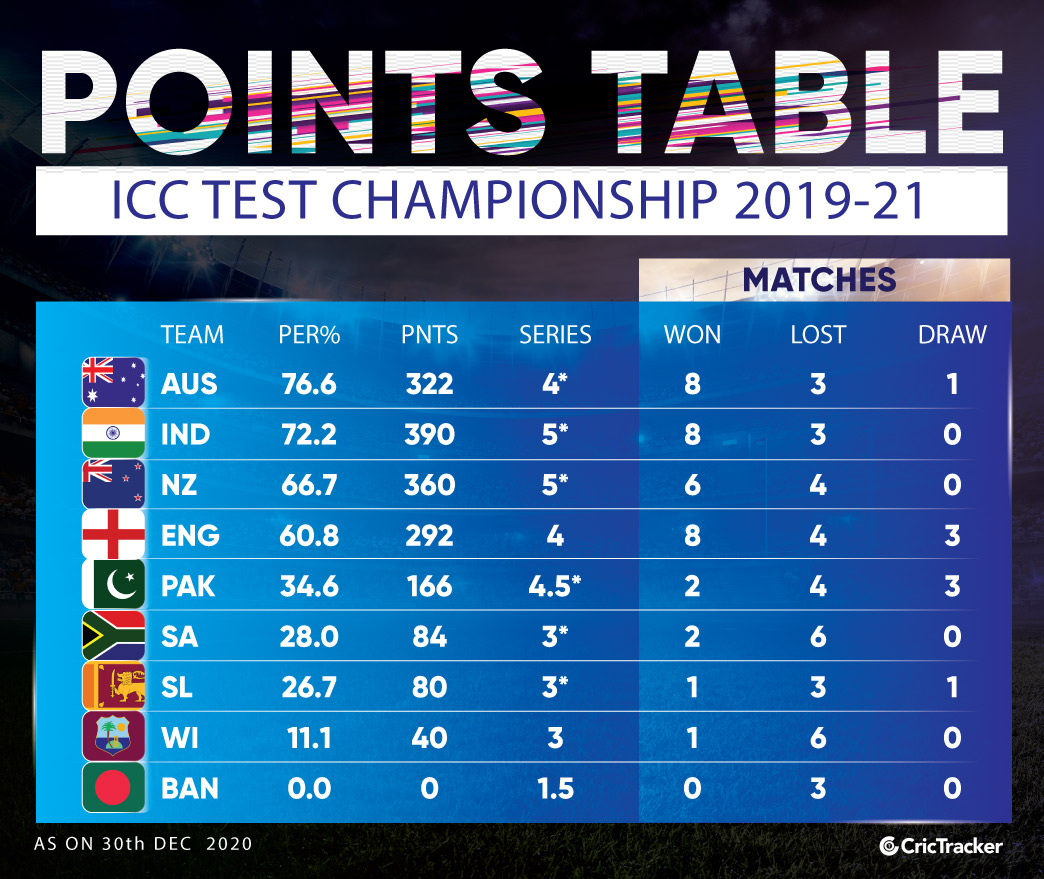