Team India completed the formality of picking up the remaining two wickets on the fourth day to complete the systematic annihilation of the visiting South Africans. It was an encore of what happened four years ago in 2015 when a much-vaunted South African team was spun into a tizzy on pitches that turned from the first day.

The visitors, back then, had called it as taking the home advantage to a whole new level. And, partly, it was true! So, coming into the 2019 series, all the talks in the South African set-up was how would they counter the dust bowls of India? How their inexperienced batting unit will negate the threat of Ravichandran Ashwin and Ravindra Jadeja.

But, little that the Proteas knew that India no longer relies on making designer tracks for their spinners to win at home, their fast bowlers are equally menacing. The third Test was the microcosm of the visitors’ ignorance as Mohammed Shami and Umesh Yadav, in a sustained period of hostility, skills and most importantly character bamboozled the South African batting to pick-up another clinical victory for their side.

A win by an innings and 202 runs not only gave India a 3-0 whitewash over the visitors but also paved the way for another 40 points in the ICC Test Championship Table. After having picked five wins in as many games, the No.1 ranked Test side in the world has consolidated its position at the numero uno spot with a cumulative 240 points, followed by New Zealand (60 points after 2 games), Sri Lanka (60 points in 2 games), Australia and England (56 points each).

India kickstarted their Test championship campaign with a clinical 2-0 win in the Caribbean. Since it was a two-match series, Team India was able to earn a total of 120 points after the series. The 3-0 whitewash has given Kohli’s men another 120 (3×40) points and with another home rubber coming up (against Bangladesh), the mean winning juggernaut masquerading as a Test match unit, have an opportunity to further solidify their spot at the top with a total of 360 points

India’s first considerable challenge in the ICC Test championship will come when the No.1 ranked Test side will travel to New Zealand for a two-match Test series in February and then the Border Gavaskar Trophy- a four-match Test series- next winter in Australia. The Men in Blue’s last home series during this cycle will be against the English when Joe Root’s men will come visiting in January of 2021.

A look at the WTC Points Table 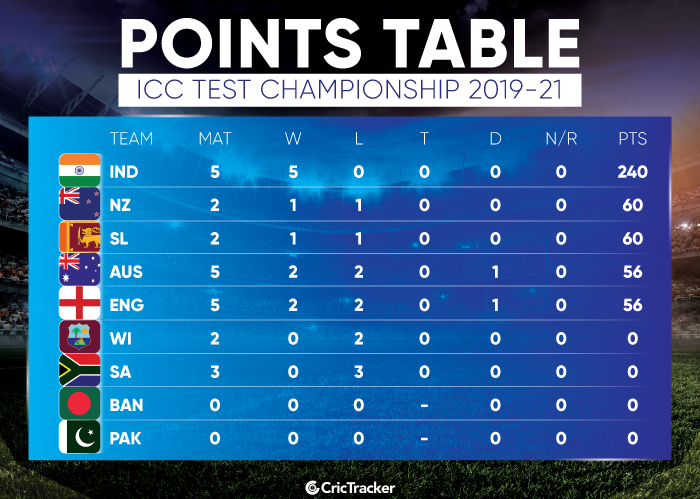