The two-match Test series between New Zealand and West Indies concluded on Monday. As expected, the Kiwis completed a comfortable 2-0 victory over the visitors and gained 120 crucial points available. While Kane Williamson slammed the double-century in the series opener and the bowlers did their job, New Zealand, even in their skipper’s absence, posted 460 with the bat in the second Test.

The score was enough for a poor West Indies batting line-up which capitulated for the fourth time in as many innings on the tour. The series win has boosted New Zealand’s chances to make it to the top two of the World Test Championship. The ICC, recently, changed the criteria of picking the top two teams from the points table thanks to the disruption of whole schedule due to COVID-19 outbreak.

The percentage of points won will be calculated now and in that aspect, New Zealand are closing in on India. With the latest two wins, the Kane Williamson-led side has won 62.5% of the points on offer while Australia and India are at the top two currently with 82.2 and 75 PCT respectively. Meanwhile, West Indies have won only one out of seven Tests played so far and their PCT is 11.1.

New Zealand have a great chance to increase their PCT to around 70 by earning 120 points more with two wins against Pakistan. The two-match Test series is set to commence on Boxing Day (December 26) and the Kiwis will then have to hope that the Virat Kohli-led India will lose a few Tests.

India are set to play a total of eight Test matches to complete their cycle and they will have to make sure, their PCT doesn’t drop below 70. As of now, Australia look set to make it to the final of the World Test Championship. However, there will be a close fight between India and New Zealand with the former side set to play four Tests at home against England.

New Zealand will have all its eyes on the upcoming Borde-Gavaskar Trophy. If Australia manage to whitewash India and New Zealand win both their Tests, then they will climb up to the second position.

Here are the latest standing in World Test Championship: 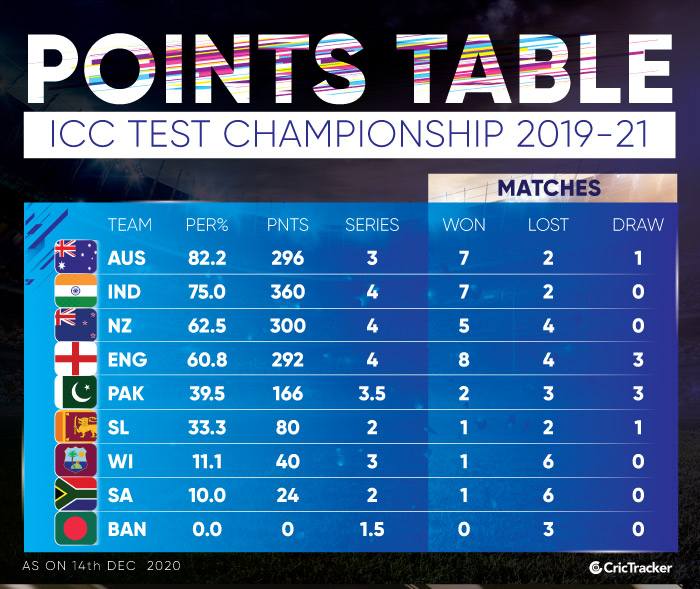