An ugly spat between the Bangladesh Cricket Board and the players have put their tour of India in jeopardy after the players said they will not participate in any active cricket for a foreseeable future until their demands were met in a hastily arranged press conference on Monday.

In the press conference held in Dhaka, the cricketers led by senior players like Shakib Al Hasan and Tamim Iqbal presented an 11-point demand sheet to the Bangladesh Cricket Board. The demands range from increasing the wage of the local players to improving the basic facilities such as the installation of Air-Conditioners in indoor nets to reviving the old format of the BPL.

It looked all hunky-dory for Bangladesh cricket after their scintillating performance in the recently concluded 50-over World Cup. But since then, it has all been downhill. Following a 0-3 whitewash at the hands of Sri Lanka in the immediate aftermath of the World Cup, Bangladesh proceeded to lose the one-off Test against Afghanistan on home soil.

The Tigers were outplayed in all facets of the game, but the two areas that the Bangladesh Cricket Board zeroed in, was the national sides’ inability to play quality wrist-spin and fast bowlers. Therefore, in a bid to boost the team’s ability to counter both the threats, the BCB made it mandatory for all the eight-teams in the Bangladesh Premier League to field at least one leg-spinner and one fast bowler in their playing 11.

This, and the other changes made to the format in the Premier League didn’t go down well with a plethora of senior players. Star all-rounder Shakib Al Hasan had come down heavily on the Cricket Board’s decision, stating that the BCB must focus on improving the playing conditions at the First-Class level while also demanding the increase in remuneration of the domestic players. The players have also demanded the BCB to lift the restriction it had placed on them in participating in more than two franchise leagues. 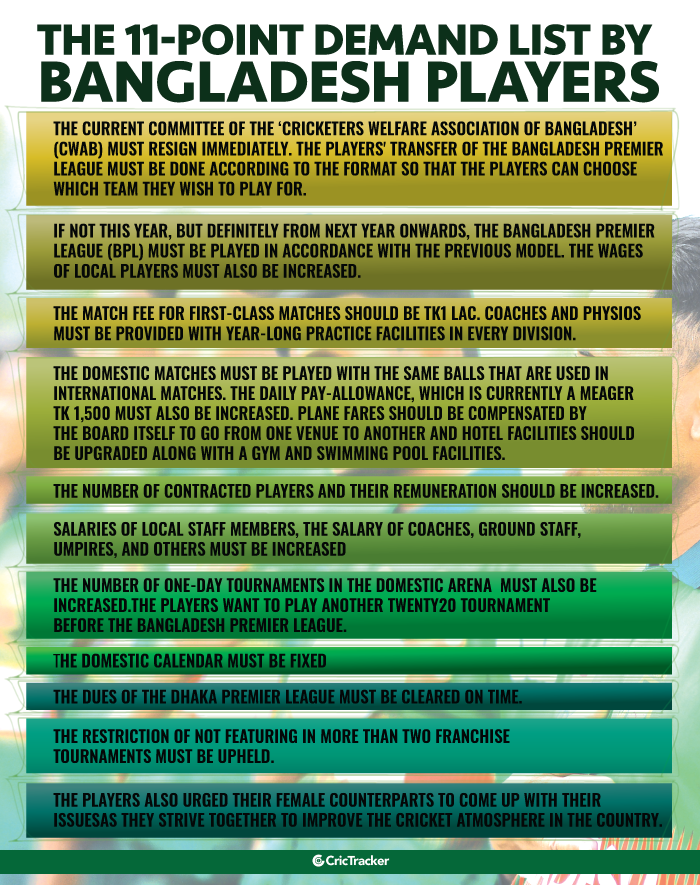