How well did you follow MS Dhoni's cricket career?

How well did you follow MS Dhoni’s cricket career?

MS Dhoni last played an international match for India in the heart-breaking semi-final loss to New Zealand in the 2019 World Cup. 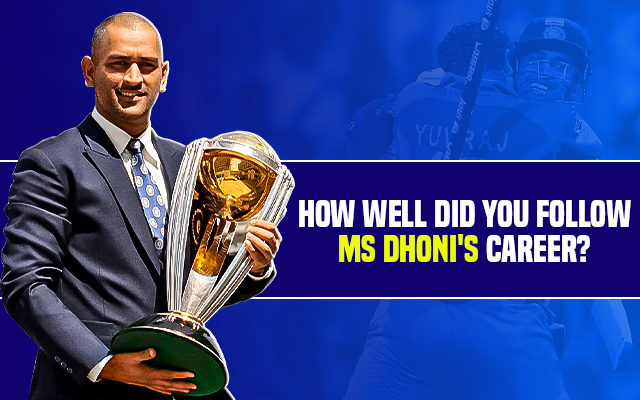 One of the most successful and India’s greatest captains ever, Mahendra Singh Dhoni (MSD) turned 41 on July 07, 2022. Born in Ranchi, Jharkhand in the year 1981, long-haired Dhoni made his international debut for India in an ODI against Bangladesh in December 2004. His first match turned out to be quite a unique and interesting one as he got run-out for a duck just after facing a solitary delivery. Dhoni took the world by storm in his fifth ODI appearance when he smashed 148 off just 123 with 15 fours and four sixes against Pakistan in Visakhapatnam in 2005.

In the same year in his 22nd outing, MSD stamped his authority yet again with another belligerent and devastating innings of 183* off 145 which include 15 fours and ten maximums against Sri Lanka in a successful run-chase of 299. By that time, he had become a phenomenon in world cricket for his aggressive and counter-attacking style of play. The wicketkeeper batter became a core and vital part of the Indian side for both his batting and keeping qualities.

Ahead of the inaugural T20 World Cup 2007, Dhoni was appointed as the captain of the side and the rest is history. He led a young team to an epic and memorable title victory in South Africa, as he became just the second Indian captain to lift a World Cup in any format after Kapil Dev’s heroics in 1983. If this wasn’t enough, MSD entered the history books again when he won the 50-overs World Cup in 2011 on home soil by defeating Sri Lanka in the finals.

MS Dhoni is the only captain to win WC, T20 WC, and CT

The most successful skipper in the history of the game, MS Dhoni also holds a truly remarkable and exceptional record. He is the only captain in history to have won the trio of 50-overs World Cup, T20 World Cup, and the Champions Trophy. After clinching both limited-over World Cups in 2007 and 2011, Dhoni went on to win yet another global title, this time in form of the Champions Trophy in 2013 in England. India beat the hosts by five runs in a rain-curtailed final to complete the treble of ICC trophies.

A true ambassador of the World and Indian cricket, MS Dhoni has left a legacy behind him both for his batting and leadership skills which will be talked about for years to come. The legendary player has amassed 10773 runs in 350 ODIs at an average of 50.57. In 90 Tests, Dhoni mustered 4876 runs at an average of 38.09 with six centuries and 33 half-centuries. His record in T20Is was quite underwhelming as he managed to score only 1617 runs in 98 matches at an average of 37.60 with just two half-centuries to his name. As a leader, he has won 42 T20 internationals for India, which is the joint second-most with Afghanistan’s Asghar Afghan.

Talking about his staggering captaincy record in the Indian Premier League (IPL), Dhoni won four titles for his Chennai Super Kings (CSK) side in 2010, 2011, 2018, and 2021. Under his leadership, CSK has managed to reach the finals for a record nine times in the league’s history. The Chennai-based franchise also won two Champions League (CL) trophies in the years 2010 and 2014 under the stewardship of the great Dhoni. On his 41st birthday, we wish MS Dhoni a Very Happy Birthday and a more successful life ahead!

Meanwhile, lets test your knowledge in this quiz based on MS Dhoni’s career: