James Faulkner won't be a part of the game due to a hamstring injury; Joe Denly has joined the Heat.

Brisbane Heat have had their fair share of stutters in the ongoing BBL campaign. Moreover, Chris Lynn’s injury hasn’t helped their cause by any stretch of the imagination. However, their victory over the Hobart Hurricanes at the Gabba helped them register their maiden victory.

Even in that game, the Heat almost snatched defeat before big hits from James Bazley took them over the finishing line. Jimmy Pierson and Co would again be facing the Hurricanes on Friday, December 30 at the Gabba in Brisbane.

The Hurricanes, on the other hand, started with two wins and once were at the top of the points table. But two defeats of late have pushed them down to the middle of the table. Peter Handscomb’s men would want to get back to winning ways in the next match against the Heat.

The pitch in Brisbane has been a decent one for batting with no visible demons. But the spinners have gotten a fair amount of assistance from the surface. Batting second has been a tad easier and hence, chasing can be avoided.

The playing conditions will be fairly pleasant with the temperature around 25 degrees Celsius. There will be a fair amount of cloud cover, but with six per cent chances of rain.

Playing Combinations for HUR vs HEA

D’Arcy is yet to fire on all cylinders in the tournament, though he has 102 runs at an average and strike-rate of 20.40 and 134.21 respectively. He has a top score of 72 but needs to be a bit more consistent.

With the ball in hand, he was in excellent form as he picked up three crucial wickets. It was his bowling that helped the Hurricanes claw back into the game after a rather indifferent start.

Sam Haezlett has been a sheer talent for the Heat. But the fact that he failed in the first three games didn’t help the Heat’s cause. However, in the previous match, he looked at his fluent best.

He took the Hurricanes’ bowling by the scruff of its neck and notched 48 runs. The quick start he gave also helped the Heat take the early advantage. The left-handed batter would be looking to replicate something similar. 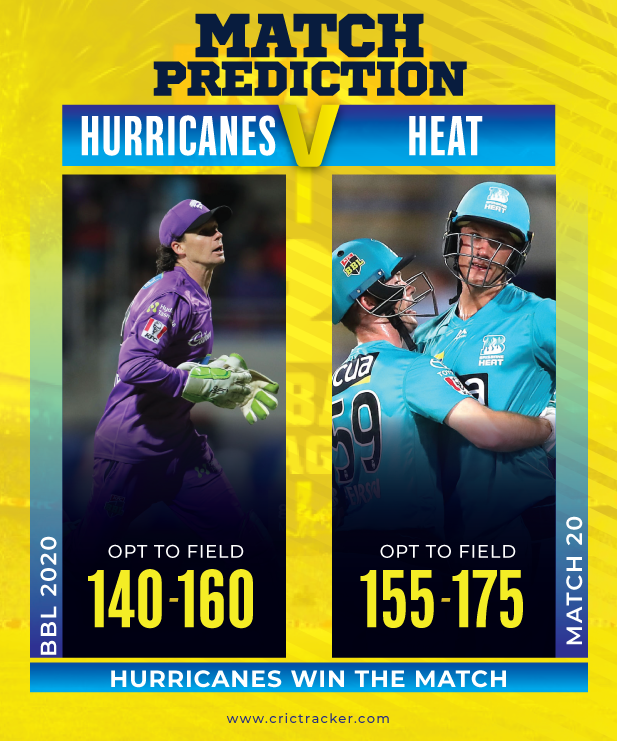