It is expected to be a high-scoring game.

The 2020-21 edition of the Big Bash League (BBL) is all set to commence on Thursday. With new rules set to come into effect, there will be excitement among the players and the fans as well to witness how the teams use their powerplays and the substitute player. The opening game will see the defending champions Sydney Sixers take on Hobart Hurricanes at the Bellerive Oval in Hobart.

Both the teams have some of the top players missing due to Australia’s ongoing international summer against India. Moises Henriques, the Sixers’ regular skipper, has been called up to Australia A squad to face India in the three- day day-night warm-up game. Even the Hurricanes’ captain Matthew Wade will be involved in the Test series against India which will lead to Peter Handscomb taking up the captaincy duties. Daniel Hughes will be leading the Sixers.

The surface at the Bellerive Oval is expected to be flat. Five matches played at the venue last season witnessed a lot of high scores. An average score of 183 also tells that the season opener of BBL 2020-21 will be a high-scoring encounter.

As far as the weather is concerned, it is expected to be cloudy for the whole day. Rain might make its presence felt but its chances are very low. The temperature will hover around 12-15 Degrees Celsius.

Playing Combinations for HUR vs SIX

When it comes to BBL, D’Arcy Short turns into a beast. He is an exceptional batsman who opens the innings and scored 357 runs in nine matches in the last season. He bowls a few overs if needed as well and had picked six wickets last season. Expect him to play a crucial role for the Hurricanes once again.

Josh Philippe opens the innings for the Sixers and is coming off a decent IPL season with RCB. He is an explosive batsman who will look to give a brilliant start to the team. Last season, he was the highest run-getter for the Sixers with 487 runs to his name at a strike-rate of more than 130. 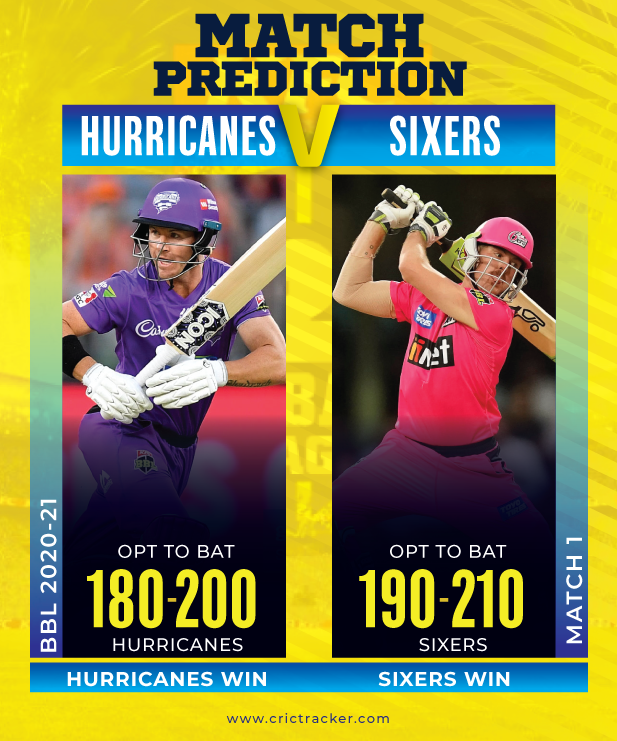