Will Punjab manage to win their second game of the season against Hyderabad? 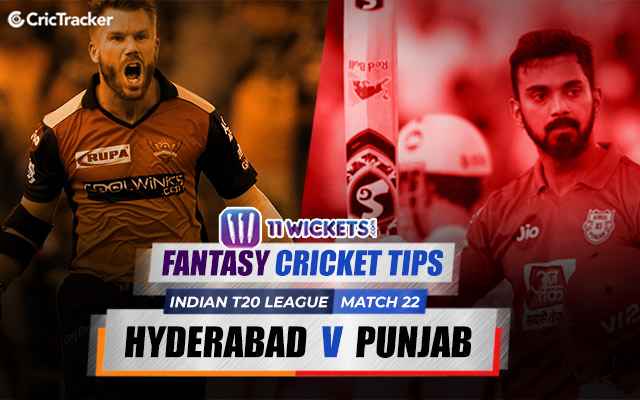 The 22nd match of the Indian T20 League 2020 will be played between Hyderabad and Punjab at the Dubai International Stadium in Dubai.

This game is scheduled to start at 07:30 PM IST (06:00 PM local time) (02:00 PM UTC). The game will be telecasted on the Star Sports Network (Available in English, Hindi, Telugu, Tamil, Kannada, and Bengali). Also, live streaming will be available on Disney+ Hotstar.

This season of the T20 League has been as bad as it has been good for both Punjab and Hyderabad so far. Both the teams have seen matches slip off their hands from positions where it was hard to even think of any other outcome of the match than them winning comfortably. Yet, both the teams have failed to convert the opportunities on hand.

Hyderabad, in 5 matches they have played, have won only two of them and are placed at the 6th position in the points table. Their opponents in this match, Punjab have fared even worse, managing to win only one match of their quota of 5 matches. So, it will be interesting to see which team gets another win to their name and shoots up in the points table, in what promises to be a cracker to a game of cricket.

The weather in Dubai on the day of this match will be clear and the cloud cover will not be there at all and the chances of rainfall are absolutely zero. The temperature will be hovering around the 31 degree Celsius mark.

The bowlers will thoroughly enjoy playing at this ground, especially in the second innings of the match. The captain of the team winning the toss will love to bat first and post a big total on the board.

Bhuvneshwar Kumar will not be playing in the remainder of T20 League 2020 due to an injury, and replacing him in the Hyderabad squad will be Prithvi Raj Yarra.

Nicholas Pooran (8.5 credits) – Nicholas Pooran, in this tournament, has scored 119 runs in 5 matches while maintaining a strike rate of 163.01.

Priyam Garg (8.5 credits) – Priyam Garg, in the three innings he has gotten the chance to bat in, has scored 71 runs at a strike rate of 154.35 and has shown the form he is in with the bat in hand.

Ravi Bishnoi (8.5 credits) – Ravi Bishnoi, in this season of the T20 League, has taken 4 wickets so far and looks to be in good form with the ball in hand. 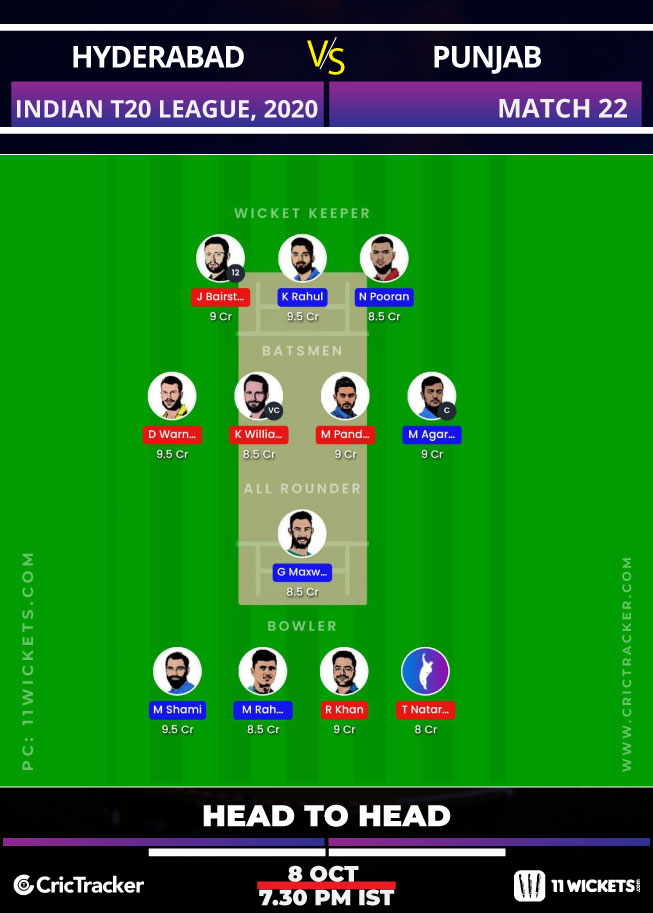 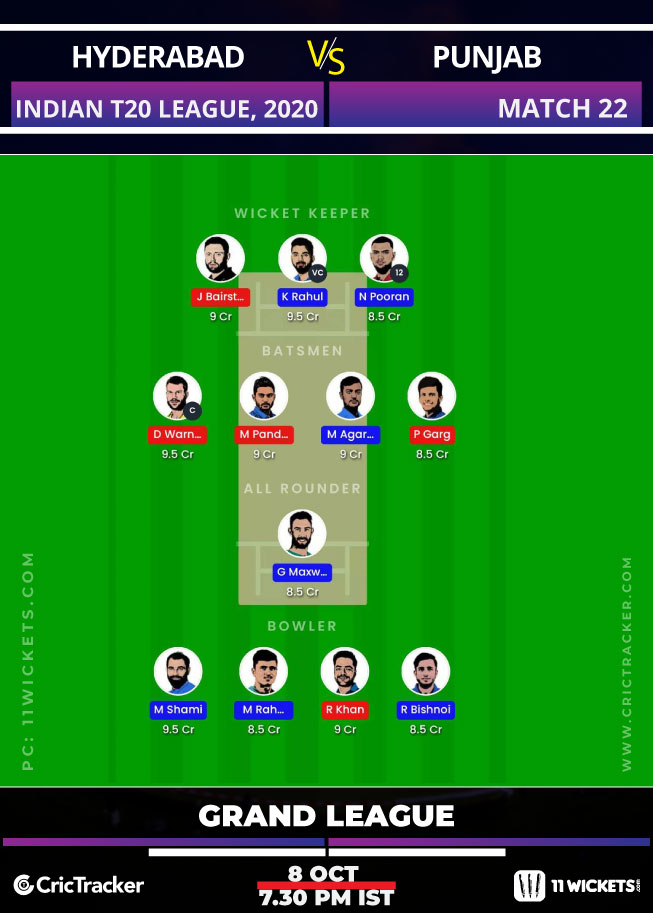 The all-rounders of both the teams have not yet made their impact in this tournament. So, it would be better to include the best player you can, in that section and for that, your choice should be Glenn Maxwell, who has shown occasional glimpses of promise.