Tamil Nadu have been excellent so far in this tournament. Expect them to continue their winning streak in this match as well.

The Elite B Group match of the Syed Mushtaq Ali Trophy 2021 will be played between Hyderabad and Tamil Nadu at Jadavpur University Campus, Kolkata.

The match is scheduled to start at 12:00 PM local time and IST on January 16th.

Top placed Tamil Nadu will take on the third-placed Hyderabad side in an important Group B encounter. While Tamil Nadu have won all three of their matches thus far, Hyderabad have lost two of the three games that they have played.

In their previous encounter against Odisha, Tamil Nadu were dominant in all departments of the game. They restricted their opposition for a score of just 132, and then reached the target in just 15.1 overs, with Narayan Jagadeesan scoring a 38 ball 61. On the other hand, the Hyderabad side went down to Bengal by 6 wickets in their last game. Hyderabad batted first and put on 157 on the board. However, the Bengal side proved too good for them as opener Shreevats Goswami scored 69 off just 48 balls to help his side beat Hyderabad with 10 balls to spare.

The temperature in Kolkata for tomorrow’s game will be around 26 degrees Celsius. There is zero percent chance of rain, with clear skies welcoming both sides tomorrow. The humidity will be 58%.

This pitch will definitely be one where the batsmen can make merry. In the previous game that was played on this pitch, Virat Singh made full use of the conditions and scored a 53 ball 103. It will surely be hard work for the bowlers.

The average first innings score in the matches played at his venue is 166.

The teams chasing have won just one out of the three games played at this venue.

There is no update as of now.

HariNishanth has proved to be the perfect foil for Jagadeesan at the top of the order. The left-hander averages 168.00 in this tournament and has scored his runs at a strike rate of 133.33. Expect him to indulge in some fireworks in tomorrow’s encounter.

Ashwin has been impressive with the ball for Tamil Nadu this season. The spinner has picked up 6 wickets in 3 games at an average of just 9.66. His economy rate is just 4.83 runs per over in this tournament.

Tilak Verma has been very impressive in this tournament thus far. The 18-year-old scored a classy 50 in the match against Bengal yesterday. He can be dangerous if he gets going tomorrow. 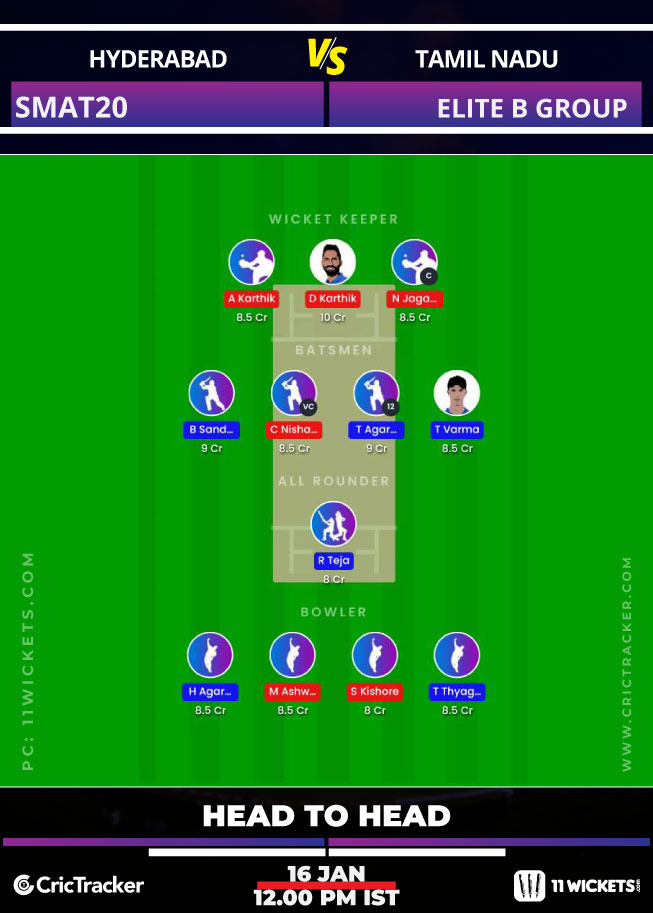 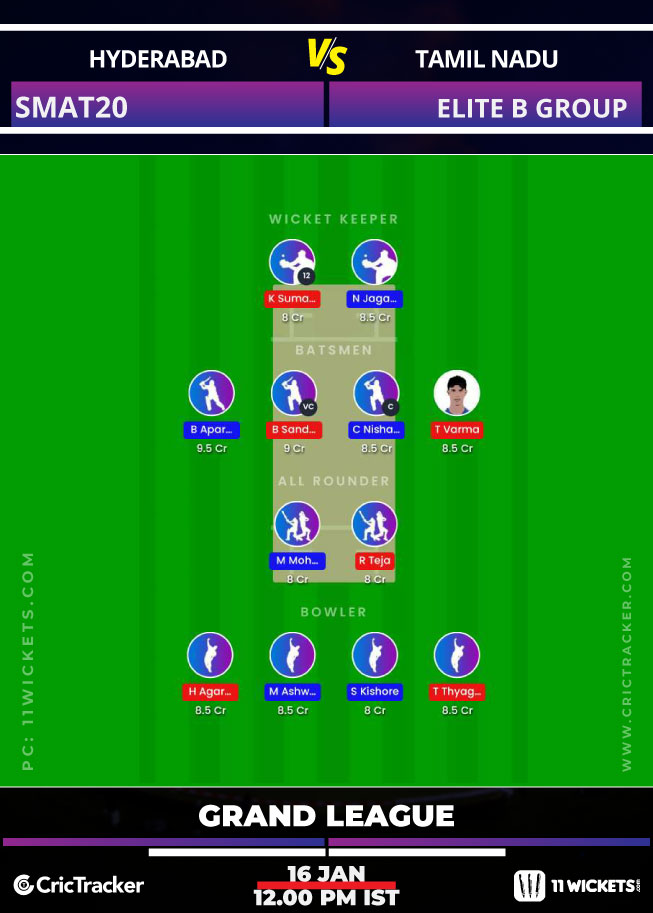 Tilak Verma can turn out to be the star performer in tomorrow’s game. He looked very comfortable at the crease in the last game, and he is a man on whom you can bet your monies on.

Tamil Nadu have been excellent so far in this tournament. Expect them to continue their winning streak in this match as well.