Saini and Morris are doubtful to play this match. 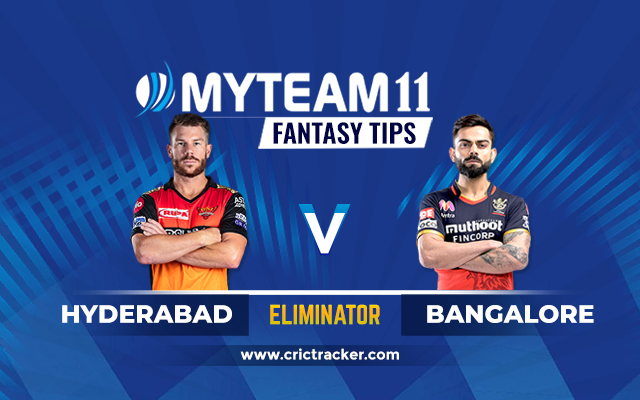 The Eliminator of the Indian T20 League 2020 will be played between Hyderabad and Bangalore at Sheikh Zayed Stadium in Abu Dhabi. We have got the best Hyderabad vs Bangalore team prediction for today’s match.

Hyderabad vs Bangalore is scheduled to start at 07:30 PM IST (06:00 PM local time) (02:00 PM UTC). The game will be telecasted on the Star Sports Network (Available in English, Hindi, Telugu, Tamil, Kannada and Bengali). Also, live streaming will be available on Disney+ Hotstar.

David Warner‘s Hyderabad is taking on Bangalore in the Eliminator of the Indian T20 League. With all the momentum, Hyderabad are coming into this game after beating the top three teams in their last three matches. They are looking clear favourites against Bangalore in Abu Dhabi. The winner in this match will play the Qualifier 2 and the loser will get knocked out of the tournament.

The fortunes seemed to have changed for Hyderabad since Wriddhiman Saha started to open which allowed them to include both Jason Holder and Kane Williamson in their middle order. Both Warner and  Saha have been unstoppable in the powerplay. Sandeep Sharma and Jason Holder have been brilliant with the ball followed by the great Rashid Khan. Overall, they are expected to win this in Abu Dhabi and go through to the next round of the playoffs.

On the other side, Bangalore suffered four consecutive defeats in the last four matches after registering 7 wins in the first ten games. They somehow managed to qualify with better NRR. They need to get their best form back against a good Hyderabad team. Their bowling has been top notch without a doubt but the weakest point in their team is there is no one to counter in the middle overs.

They also lacked a finishing knock from Virat Kohli and AB de Villiers in the last four games which literally became the ultimate reason behind their four defeats. However, they need to think something out of the box and get to their best against the Warner and co in Abu Dhabi.

Both Navdeep Saini and Chris Morris were unfit in the last game and their availability is still uncertain.

The temperature is cooling down day by day. It is expected to be around 29 Degree Celsius during the match time and a drop to 27 Degree Celsius till the end in Abu Dhabi. The dew factor might come into play in the later phase of the game.

The pitch in the Sheikh Zayed Stadium has been good for both bowling and batting recently. It has become a chasing wicket and the team winning the toss would like to bowl first. We saw some big scores in the last few games and can expect another high-scoring game for the Eliminator.

David Warner – Hyderabad – David Warner is currently the second highest run-scorer of the tournament with 529 runs. He is coming off a brilliant match-winning 85 against the table toppers Mumbai. He has an average of 64 at this venue this season.

Hyderabad is expected to win this match.