KXIP will be looking forward to ending their long wait of past 12 seasons and bring the trophy home this year.

The Board of Control for Cricket in India (BCCI) is all set to kick-start the much-awaited 13th edition of the Indian Premier League from September 19, with the final to take place on November 10. The tournament was scheduled to commence from March 29 but was delayed and has now been moved out of the country in the view of the ongoing coronavirus pandemic.

The lucrative league will feature 56 matches, to be played across three venues namely Dubai, Abu Dhabi and Sharjah. The defending champions Mumbai Indians will be up against runners-up Chennai Super Kings in the inaugural fixture of the T20 Championship at Sheikh Zayed Cricket Stadium, Abu Dhabi.

With the league just a few days away, all the eight franchises are implementing different ways to keep their fans engaged and also keep posting updates about the players via their official social media handles. On Saturday (September 12), Kings XI Punjab (KXIP) took to their official Instagram handle to post a fun video featuring Arshdeep Singh and Harpreet Singh. In the video, Arshdeep can be seen bowling to Harpreet while dancing on the tunes of a song.

The adorable video was liked a lot by the cricket fans as they flooded the comment section with the praises and love for the Punjab-based franchise. However, what caught the attention of the netizens was a comment by the Bollywood actress and the KXIP co-owner Preity Zinta.

Zinta wrote, ”Love it! I see the boys are working really hard.” 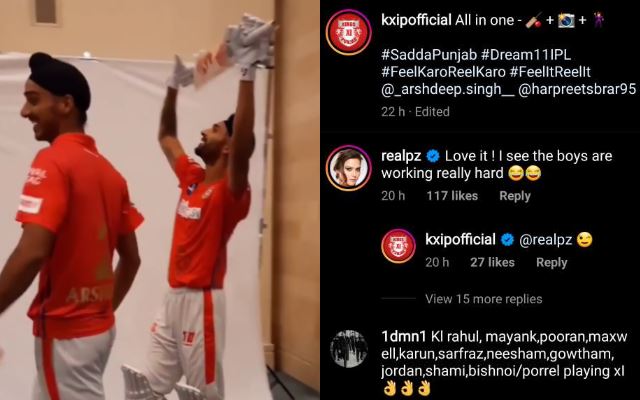 KXIP to register victory in IPL 2020?

The IPL franchise Kings XI Punjab (KXIP) will be looking forward to ending their long wait of past 12 seasons and bring the trophy home this year. Punjab had begun its journey by making it to the semi-finals of 2008 edition but after that, their last best performance came in 2014 where they were the runners-up.

Other than the two seasons, the team has failed to make it to the playoffs and has been the wooden spooners thrice in the history of the game. In the upcoming edition, the franchise will be looking forward to change their fortunes and claim their maiden title under the leadership of Indian swashbuckling batsman KL Rahul and Director of Operations, Anil Kumble.

Also, they will try to make full use of legends like Chris Gayle, Glenn Maxwell, Chris Jordan and Mohammed Shami. Punjab will kick-start their campaign for the 2020 edition against Delhi Capitals at Dubai International Cricket Stadium on September 20.