Punam Raut left the field despite being adjudged not out by the umpire. 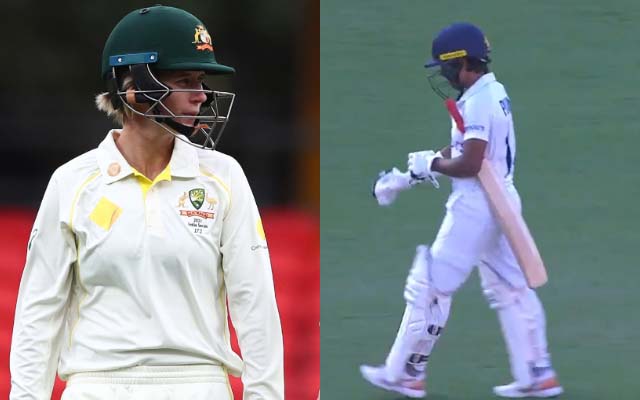 Punam Raut left the cricket world stunned with her remarkable display of sportsman spirit in the ongoing women’s Test match between India and Australia. Despite being adjudged not out by the umpire, the Indian batter decided to leave, knowing she has edged the ball. Furthermore, the DRS (Decision Review System) is not available in this series. Hence, Punam could have prolonged her stay easily.

However, she put her ethics in front and earned praises from different corners. Speaking of the incidence, it was the 81st over of the first innings and Sophie Molineux was operating with the ball. The left-arm spinner went for a full delivery in the third ball that went right past Raut’s bat. Although the Aussie fielders appealed for a caught behind, the on-field umpire gave the decision in Raut’s favour.

However, the batter astonishingly walked off the field and the Aussies were left stunned. It has to be noted that Raut scored 36 off 165 deliveries. She even looked all set to play an innings of substance. Nevertheless, her innings famously ended at 36. Although the star batter departed, her act continued to be a topic of discussion among the Aussie fielders.

No DRS, Umpire said not-out but Punam Raut knows she edged this and she walked back to the dressing room.pic.twitter.com/JAfSd76ORL

Beth Mooney not in the same page with Punam Raut

Opining on Raut’s walk-off, opener Beth Mooney said she wouldn’t have left the field had she been in the Indian batter’s shoes. “I would never walk off, at times it goes in your way as well,” the Australian batter was caught saying in the stump microphone. Consequently, like Raut’s act, her statement also became the talk of the same.

Speaking of the one-off Test, Australia won the toss and opted to bowl at the Carrara Oval in Queensland. Indian openers embraced the challenge and tackled the new cherry with precision. Smriti Mandhana and Shafali Verma added 93 runs for the first wicket before the latter got out. Mandhana went on to smash a brilliant century, putting India on the driver’s seat.

Coming to bat at number three, Raut also contributed with a handy 36 before walking off. Hence, India’s top order has done their job and it would be interesting to see where the visitors will end in the first innings.