After a wait of over fourteen months, the ‘mother of all encounters’ was finally here. The scene – a cloudy Edgbaston which was all in readiness for an India-Pakistan clash. The defending champions of the ICC Champions Trophy were up against their arch-rivals in their opening game of the multilateral tournament.

Perhaps this was the only way to bring these two nations on to the cricket field, because as of late, India had suspended all bilateral cricketing ties due to political tensions. The players, however, kept themselves cool ahead of the tense battle and let the cricket do the talking.

One man in particular from the Indian contingent has had a knack of thriving in India-Pakistan battles in recent times. Be it the Asia Cup or the World T20, he has steered his team home, often when the chips were down for India. Today, he took to the field with an added responsibility of captaining the Indian Cricket Team, and boy did he do it well.

The Indian Premier League might not have reflected the Virat Kohli we all know, but there’s no doubt about this man’s hunger for runs is insatiable. He has been leading from the front right from the time he took over the responsibility from MS Dhoni in the Test arena. Kohli has been churning out runs from God knows where. The milestones have just whooshed past Virat Kohli, and for the sake of Indian Cricket, we indeed hope they continue to do so.

The much-awaited clash against Pakistan was just another day at the office for Virat Kohli. Chants of ‘Kohli! Kohli! Kohli’ rang around the ground the moment Shikhar Dhawan was dismissed for a well-made 68. It must be quite disheartening for a batsman to walk back amidst cheers for the next man, as though the crowd wanted him to get out. In either case, Kohli stuck around while Rohit Sharma continued to edge towards a fine hundred.

A slow Virat Kohli to start with

Virat Kohli wasn’t his usual aggressive self at the pitch. He took a while to get the engine revving. He took it easy and played with an element of caution – all ‘unKohliesque’ characteristics. Rohit Sharma’s unfortunate run out which left him 9 runs short of what would have been a strong hundred and a strong statement as well, brought Yuvraj Singh to the crease.

Even then Kohli was in pacified mode. Today’s Yuvi is known to take his time at the crease, even when it comes to the shortest format of the game, while Kohli’s natural game is being the aggressor. There was, however, a role reversal at Edgbaston, as Yuvraj launched into his innings right from the word go.

A flat-batted six over long-on brought out a yell from Virat Kohli. It was his first of the game and it had also brought up his fifty. In retrospect, that was the turning point in Virat Kohli’s innings. The very next over, Wahab Riaz went for 15 runs off his first 3 balls – the perpetrator was, of course, Virat Kohli. Although it was just a matter of a few balls, the remainder of Kohli’s innings was all uphill. It was as though a new batsman had come to the crease.

Yuvraj’s dismissal didn’t put Kohli in defensive mode whatsoever. Instead, he took on Hasan Ali, smashing him for a four and a six in the penultimate over of the innings. Kohli fittingly finished the innings with a four and walked back undefeated on 81. From nowhere, Virat Kohli had accelerated to score 31 runs off 10 balls post his half-century. He made sure India were in a commanding position at the halfway mark with 319 on the board.

Despite the target being readjusted due to rains playing hide and seek, Pakistan never looked like a threat during the chase. India had handed Pakistan a humiliating defeat of 124 runs to make it even-stevens in Champions Trophy encounters. As for Virat Kohli, his captain’s innings earned him a great deal of confidence, as well as the CT Player of the Match award. 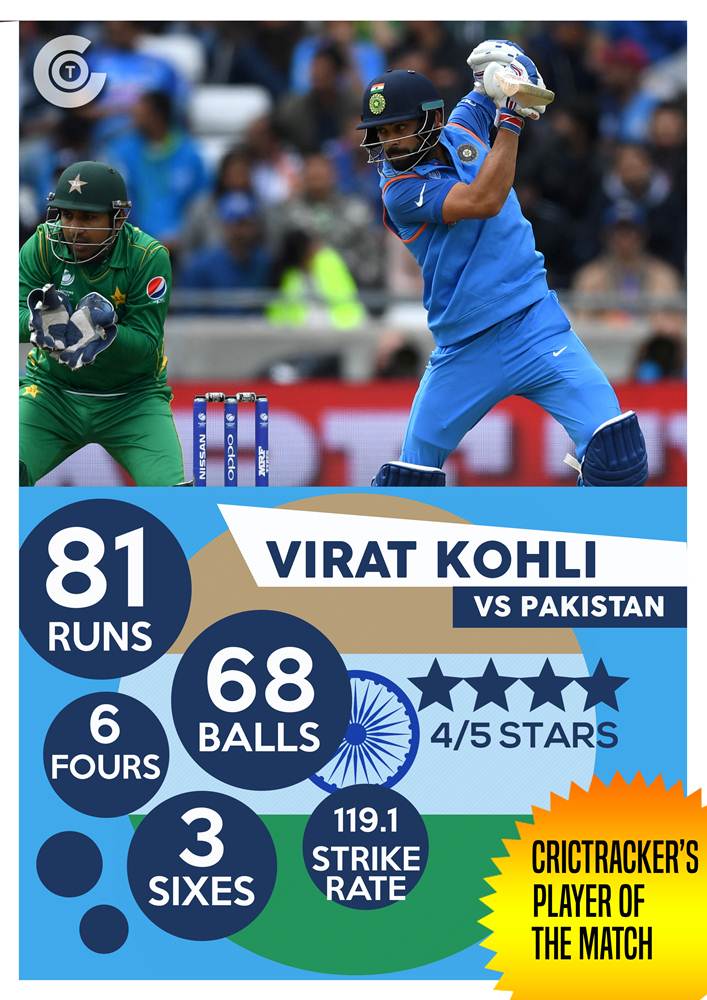