Scotland are a much stronger side compared to PNG. Better pick only four PNG players in your fantasy team and among them, Tony Ura and Assad Vala are a must.

The 13th game of the ICC Men’s T20 World Cup Qualifier 2019 will be played between Scotland and Papua New Guinea at the ICC Academy in Dubai.

The in-form Papua New Guinea will face Scotland in the 14th match of the ongoing ICC T20 World Cup Qualifier 2019. Tony Ura and Assad Vala have been in amazing form. PNG thrashed Namibia by 81 runs on Sunday and it was this due’s batting at the top of the order which made it possible. Rather Namibia were expected to give them a run for their money but it ended up being a one-sided contest.

Scotland, on the other hand, have come back strongly after suffering a shock defeat at the hands of Singapore. They defeated Kenya by 31 runs and are a stronger outfit compared to PNG. But Scotland can’t take things for granted against them and another loss could put their chances of qualifying for the tournament proper in trouble.

There is no chance of rain possible in Dubai on Monday. The sun will be out and the players might struggle due to excessive heat. The temperature will hover around 31-34 Degrees Celsius during the match according to AccuWeather.

The pitches have slowly started to get tired with the amount of cricket being played. This will be the fifth match at the venue and if multiple pitches are being used, it will possibly be the third game on the surface being used. So the mantra will be to bat first after winning the toss.

Average first innings score: 141 (4 matches at the venue in this tournament)

Assad Vala and Tony Ura are in amazing form and both should be picked in your Dream11 Fantasy team. Norman Vanua has also been bowling well and can be picked. For Scotland, Munsey, Coetzer, MacLeod and bowlers all could be top picks for this match. Apart from the batsmen, Davey, Sole and Berrington will be crucial. 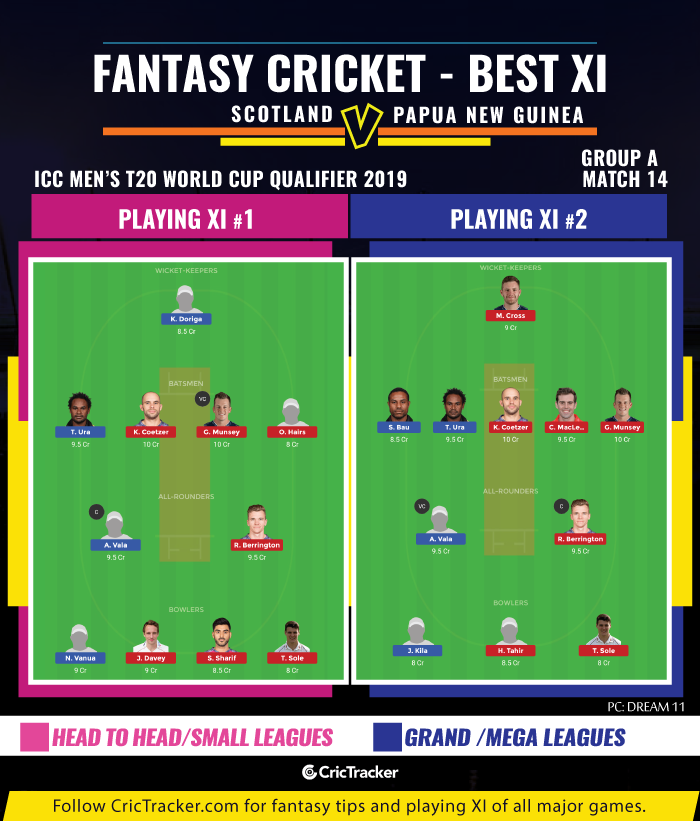 Scotland are a much stronger side compared to PNG. Better pick only four PNG players in your fantasy team and among them, Tony Ura and Assad Vala are a must.

Scotland are expected to stop PNG’s merry run in the tournament.