Ravinderpal Singh has shown as R Singh in Dream11 Fantasy and is pretty low in the list available for 8.5 credits. He has been picked only by 8% of teams so far. Pick him without hesitation in your team.

The 11th match of the 2019 ICC Men’s T20 World Cup Qualifier will be played between the hosts Canada and Jersey at the Sheikh Zayed Stadium Nursery 1 in Abu Dhabi.

Canada will become the last team to get its T20 WC Qualifier campaign underway on Sunday. They will face the rampant Jersey side in the Group B clash in Abu Dhabi. Jersey are coming off a convincing victory over Nigeria at a nearby venue on Saturday and will be brimming with confidence. With tougher matches to come, they will be keen on collecting crucial points.

Having said that Canada is not an easier opposition by any means. They have some exceptional and experienced players up their sleeve, the Navneet Dhaliwal-led side will be itching to start their tournament on a high. Jersey won’t make it easy for them though and a mouthwatering contest is in prospect to start the Sunday for the fans.

Dealing with the heat in the UAE is going to be a problem for the teams. As far as Sunday is concerned, the sun will out at 10 AM when the match starts. The temperature will be around 31 Degrees Celsius at the start which is expected to go up to 36 Degrees by 1 PM according to AccuWeather. Rain? No chance.

There is no much information on how the surface will behave at the venue. Only a solitary T20I has been played at the Sheikh Zayed Stadium Nursery 1 last year between Australia and the UAE. Expect the pitch to be slow but with this being the first match of the season, the teams might post a total close to 150. The team winning the toss should bat first.

Ravinderpal Singh is the best batsman for Canada. He has already played a brilliant knock in the warm-up game. Though he bats at number five, he has to be picked in your Dream11 Fantasy side. Navneet Dhaliwal, Canada skipper, will either open the innings or bat at three and is a good batsman. Jeremy Gordon is experienced and he is expected to play along with Dillon Heyliger.

For Jersey, Jonty Jenner looks a decent batsman while Ben Stevens is also a good option to pick. But don’t go by performance in the game against Nigeria. Canada is a much stronger side and their bowlers can pick quick wickets. 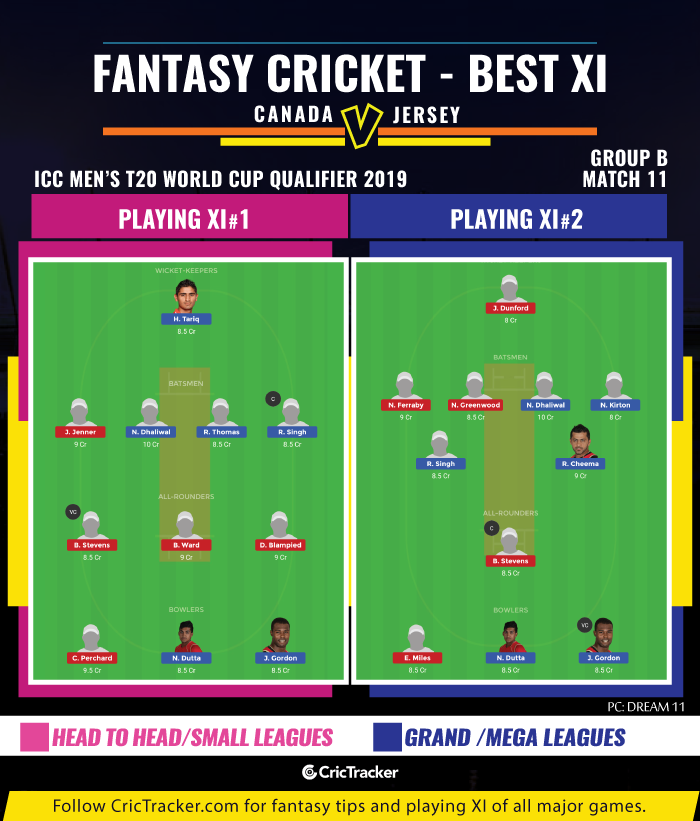 Ravinderpal Singh has shown as R Singh in Dream11 Fantasy and is pretty low in the list available for 8.5 credits. He has been picked only by 8% of teams so far. Pick him without hesitation in your team.

Wait for Canada’s XIs to come, as one of Abraash Khan or Nicholas Karlton are expected to play. Dillon Heyliger and Jeremy Gordon both are good bowlers. Again, fewer teams have picked them and you can select them in your team without much hesitation.

Canada looks a better-equipped team compared to Jersey and will enter the contest as the favourites. But this should be a close contest.