Top-order batsmen are viable options given the nature of the surface.

Hosts, UAE looks to get over the suspensions of their senior players, Shaiman Anwar and Mohammad Naveed as they face Oman in the final game on Friday. Both sides won their warm-up games prior to the Qualifiers quite convincingly. Although UAE is higher ranked than their Gulf counterparts, they are left shorthanded by ICC’s suspension on three of their players.

On the other hand, Oman is high on morale and confidence. Coming into the tournament on the back of the T20I series win which included Ireland and the Netherlands, Oman is certainly considered to be amongst the strongest teams in the ICC T20 World Cup Qualifier 2019.

Without Anwar and Naveed’s services, the onus falls upon Rohan Mustafa and Mohammad Usman, who have consistently scored runs for UAE over the last few years. Ashfaq Ahmed, who is the highest run-scorer for UAE this year with 231 runs, is crucial to their cause although their bowling unit is their stronger suit.

Zahoor Khan is their best bet with the ball with the UAE pacer starring for the Brampton Wolves earlier in the year with seven wickets in four games. Oman’s trio of all-rounders will be in the limelight against UAE. Khawar Ali and Aamir Kaleem wreaked havoc in the recently concluded Oman T20I Series with nine wickets each and are also capable of scoring quick runs. Both teams are evenly matched on paper and would eye a crucial win to kickstart their ICC T20 World Cup Qualifier 2019 campaign.

High temperatures and humid conditions are typical of weather in the UAE, which is the case in Abu Dhabi as well. Humidity and cloud cover of 61% and 94% respectively, according to AccuWeather, would be a major factor while dew could also come into play as the game progresses.

The pitch at the Sheikh Zayed Stadium is generally good for batting with scores over 160 being a common sight here. Chasing a target is preferred here with some turn also on offer for the spinners with this being the second game being played on this pitch on Friday.

Shaiman Anwar, Mohammad Naveed and Qadeer Ahmed are suspended having been charged under the ICC Anti-Corruption Code. Their replacements have been named.

Rohan Mustafa is UAE’s best bet with both bat and ball. Although his T20I numbers aren’t too great, he has scored two fifties and picked 27 wickets at an average of 21.44. Waheed Ahmed starred for UAE against PNG with a quick-fire 36 off 11 balls. He even topped it up with three wickets to his name to throw his name into the hat for the hosts.

Oman all-rounder, Aamir Kaleem is one to watch out for with his ability to pace his innings being crucial. He was the standout player for Oman in their historic win prior to the tournament. Jatinder Singh has scored the most runs for Oman in 2019 with 132 runs. Although he didn’t have the best of times earlier this month, Jatinder Singh and Khawar Ali will be key at the top of the order. 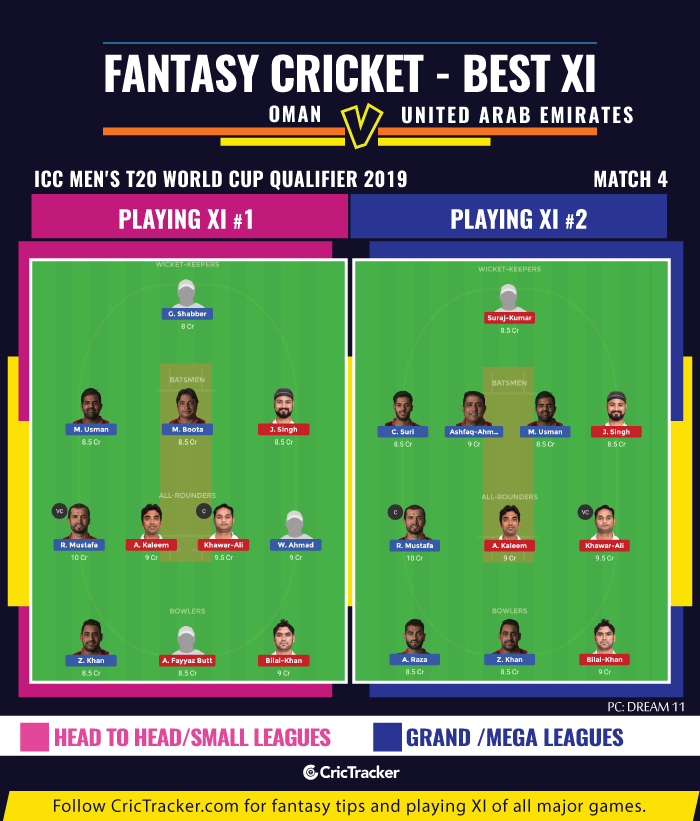 Top-order batsmen are viable options given the nature of the surface. Mohammad Usman scored a fifty in UAE’s warm-up win against PNG. He is a decent pick in your Dream11 Fantasy team with the veteran available for a reasonable 8.5 credits.

Oman should edge the hosts, UAE, who are weakened by the suspensions of Shaiman Anwar and Mohammad Naveed.