Netherlands or PNG? Who will top the group and make their way to the T20 World Cup.

Two crucial Group A games are in store for Super Sunday. Papua New Guinea and Kenya will be playing the morning game. Kenya have a mathematical chance of qualifying, but need something extraordinary to go through. On the contrary, PNG will give themselves a great chance of making the T20 World Cup next year if they win the match. In the other game, Netherlands and Scotland will play.

Netherlands will be looking at the first game. If PNG lose then a victory will seal Netherland’s position in the T20 World Cup. If PNG don’t lose, even then Pieter Seelaar and Co will be in with a chance of topping the points table. Scotland have a chance of topping the table, but chances are very remote. The Scott have huffed and puffed, losing first to Singapore and then to Namibia.

The pitch in Dubai has produced some scores, Netherlands and Scotland have already breached the 200-run mark. The bowling has to be on its mark to avoid getting carted. In all the games thus far at the venue, the team, batting first has won. Hence, it’s a no-brainer that teams should avoid chasing.

The weather will be extremely hot in the morning with the temperature going up to as high as 36 degrees Celsius. It will stay mostly the same till the time the sun is out. The humidity won’t be much though. Players need to take fluids on a regular basis in order to stay hydrated.

Skipper Assad Vala and Tony Ura’s opening duo has attributed to PNG’s domination. Both has average in the 40s with strike-rates over 120 and a fifty each as well. The likes of Sese Bau, Kiplin Doriga and Charles Amini have also stepped up with the bat whenever needed. Coming to their bowling, pacer Ravu has eight wickets. Vala, Vanua, Amini and Pokana have six scalps each.

Irfan Karim and Dhiren Gondaria are the leading run-scorers for Canada with 144 and 140 runs respectively. Opener Aman Gandhi and the veteran Collins Obuya have one half-century each. Apart from that, their batting has misfired. In the bowling department, leg-spinner Obuya has nine wickets in his kitty. Skipper Ngoche has seven wickets. Pacer Lucas Oluoch has picked five wickets.

The prediction is for PNG to win the match. 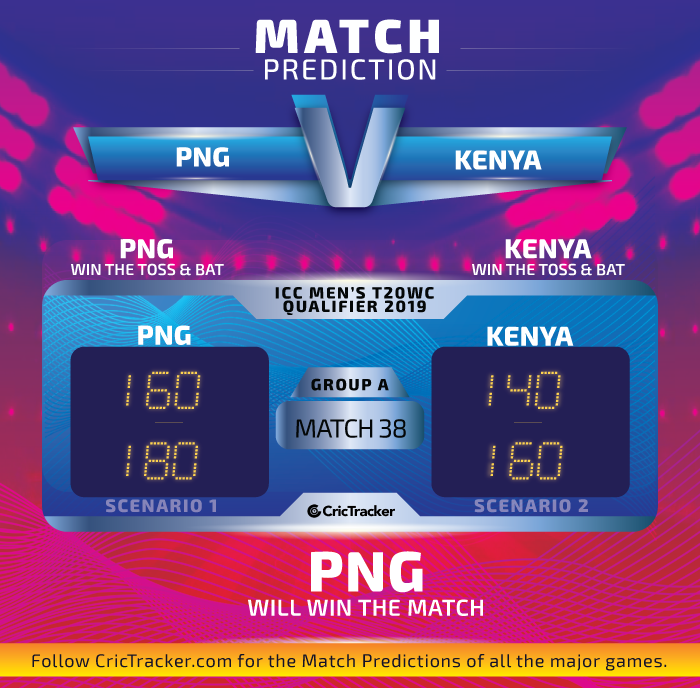 Match 41, Scotland vs Netherlands, Group A

Barring the game versus Bermuda, Scotland’s batting hasn’t been at its best. Calum Macleod is their leading run-getter with 187 runs at an average of 37.40. Kyle Coetzer, George Munsey and Richie Berrington have threatened, but haven’t been consistent enough. In bowling, Hamza Tahir, Josh Davey and Safyaan Sharif have shouldered most of the responsibility with support from Mark Watt.

The prediction is for Netherlands to win the match. 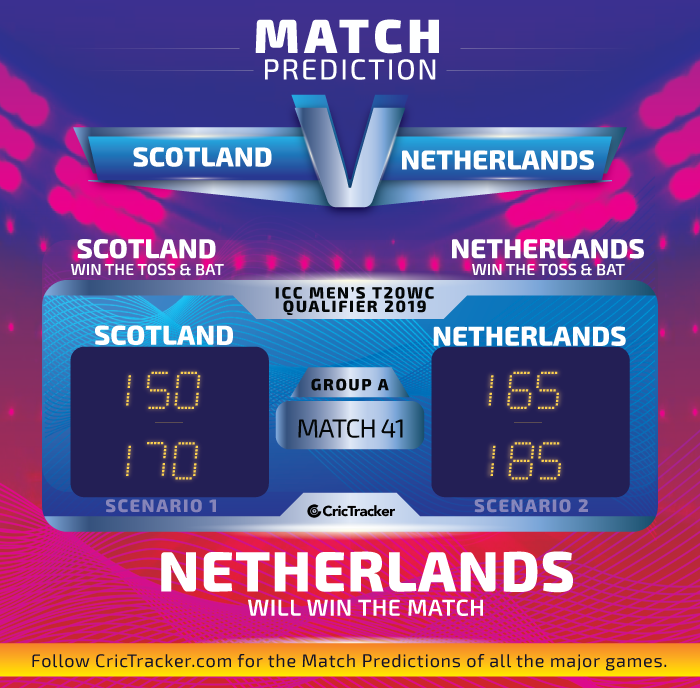