Barry McCarthy has replaced an injured David Delany in the Ireland squad.

The qualification for the T20 World Cup has already been done and dusted with. But the champion of the T20 World Cup Qualifiers in the UAE is yet to be decided. On Friday, November 1, the semi-finals are scheduled to take place in Dubai. In the first of the doubleheader, Ireland and Netherlands will lock horns. Ireland qualified directly for the semi-finals after topping the table in Group B.

Netherlands, on the other hand, haven’t dropped a game barring the one versus the PNG. Ireland did have their stutters in the group games. In the second match, PNG and Namibia will be crossing swords. Gerhard Erasmus’ Namibia are on a rampage after winning five matches on the trot. PNG lost only one league game and was the first team to make it through to the T20 World Cup.

The pitch in Dubai hasn’t shown much demons and run scoring hasn’t been all that difficult. With short boundaries on one side, teams have also hit a number of sixes. But the ball has tended to swing around in the initial stages and there lies the chance for the fast bowlers.

The weather is expected to be a tad cooler than the past few days. The maximum temperature will be 33 degrees Celsius at the start and will come down to 30 at night. The humidity will be in the 40s throughout the duration of the two matches. There will be a bit of dew, especially in the second game.

Ireland’s batting has mostly revolved around Paul Stirling, who has 237 runs at an average of 47.40. Gareth Delany, Andrew Balbirnie and Kevin O’Brien have over 100 runs. Kevin’s form is a bit of a concern as he has an average of only 17, opening the batting. In bowling, Mark Adair has 10 wickets. David Delany has been ruled out due to a knee injury and Barry McCarthy has replaced the pacer.

Among the regular Netherlands’ bowlers, only Van der Gugten has an economy of 6. All the others have economy under 6, which suggests the Dutch’s dominance. Paul van Meekeren has 14 wickets to go with an economy of 5.25. Glover and Van der Merwe has 12 and 10 wickets respectively. In batting, Colin Ackermann, O’Dowd, Cooper and Ten Doeschate have put on collective efforts.

The prediction is for the Netherlands to win the match. 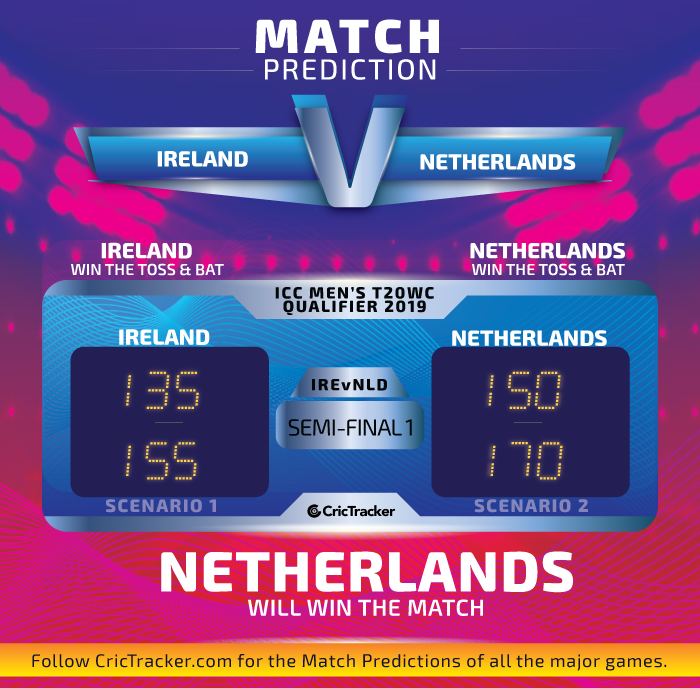 For PNG, their skipper Assad Vala has led from the front as he has scored 184 runs at 36.80 to go with 9 wickets. Nosaina Pokana also has 9 wickets to his name. Damien Ravu is their highest wicket-taker with 10 scalps. Norman Vanua and Charles Amini have delivered with the ball as well. Tony Ura is PNG’s second-most prolific batsman after the captain, having scored 177 runs at 35.40.

Namibia’s power-hitting is their USP. Their batsmen have amassed 42 sixes thus far. Skipper Erasmus has 213 runs at 42.60. JJ Smit and Niko Davin have strike-rates of 188.50 and 169.62 respectively. Craig Williams and Stephan Baard have been reasonable. In bowling, the onus will mostly be on Scholtz and Frylinck to get the wickets. The duo needs support from Smit and Christi Viljoen.

The prediction is for Namibia to win the match. 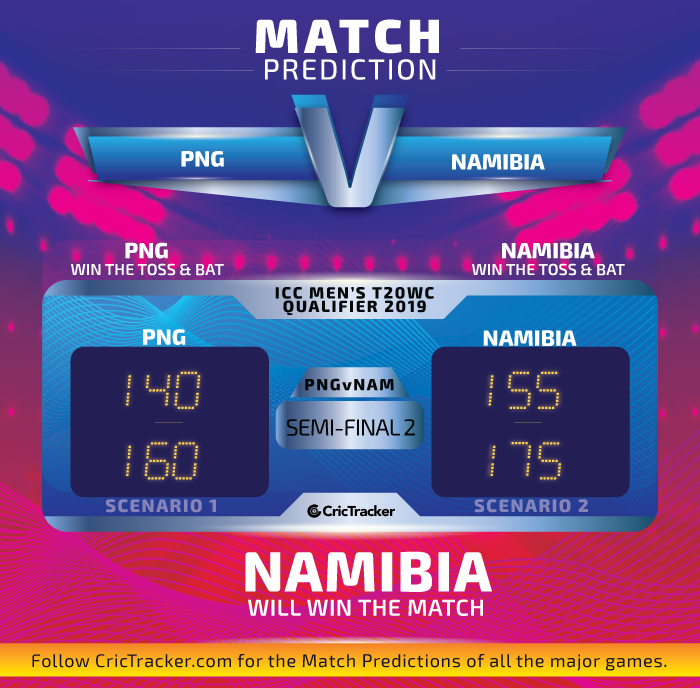