In Group B, hosts United Arab Emirates (UAE) made a comeback after their loss to Oman. The Ahmed Raza-led unit defeated Ireland by five wickets to open their account in the ICC T20 World Cup Qualifiers. Their next match is versus Hong Kong and another victory will take them into the top-half of the table. On the other hand, Ireland will be looking for a victory over Oman, in their next contest.

Meanwhile, Canada carried on with their form from the warm-ups and thrashed Jersey, who made a brilliant start versus Nigeria, by 53 runs. Yet another time, their batting stood tall and was backed up by their bowlers. Nigeria strained to find their feet and lost their opening encounter by a mammoth 69 runs. Earlier this year, Nigeria replaced Zimbabwe, who was slapped with a suspension by the ICC.

The venue is a tough-one for run-scoring owing to the long boundaries, especially at the square. Hence, rotating the strike will be of prime significance. The pitch under the sun has been fairly good for batting. The spinners are likely to be hard to get away in favourable conditions.

The ground produced an excellent track in the game between Canada and Jersey. In that match, the batters played their strokes freely without nurturing any inhibition. The strip is expected to remain true throughout and sides will be better off, batting first and then putting pressure on the opponent.

The weather will stay clear throughout the day with no chances of rain whatsoever. The temperature is expected to be around 30 degrees Celsius and 34 degrees Celsius. There won’t be any cloud during both the encounters. The humidity will increase as the day progresses.

Rohan Mustafa was exceptional the other night, bowling at the death and also making a blistering start with the bat. Ashfaq will be looking to make amends after the twin failures. The middle-order also looked solid and has gotten runs in tough conditions. Their spin-trio of Sultan, Raza and Mustafa, has been hard to get away. Junaid Siddique and Zahoor have been reasonable as well.

Hong Kong hasn’t had much to cheer in the tournament thus far. In the first game, skipper Kinchit Shah scored a magnificent half-century. In the second game, Nizakat Khan scored a 33-ball 31. But apart from that, their batting has imploded to a large extent. Both Shah and Nizakat are top-order batters and it’s time for their middle order to step up. The bowling has to be better as well.

The prediction is for UAE to win the match. 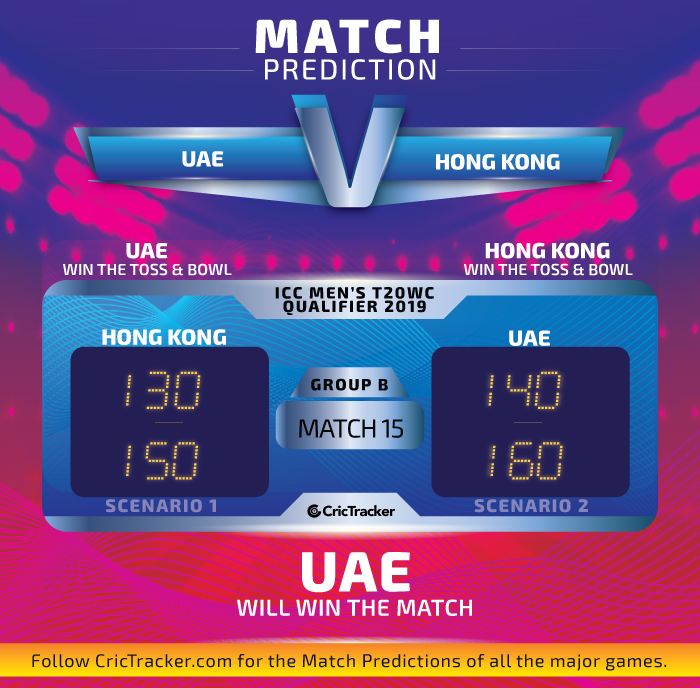 Ireland has looked a tad vulnerable in the spin-department. Dockrell was taken to the cleaners in the last game. Even leg-spinner was entrusted for only one over. The pace department mostly has Adair, Rankin and David Delany. In the batting area, Stirling has been the standout performer. The likes of O’Brien and Balbirnie need to be on top of their game as the middle-order is short on experience.

Oman has done exceptionally thus far, especially with the ball in hand. It’s because of their bowling that their batsmen haven’t been out under pressure. Their spinners- Aamir Kaleem and Khawar Ali- have got the opponent in the stranglehold. Even the likes of Fayyaz Butt and Bilal Khan have given them the breakthroughs at the top. Their job versus the Irishmen can be a little difficult though.

The prediction is for Ireland to win the match. Canada won’t wish to tinker with their winning combination. Navneet Dhaliwal, Nitish Kumar stepped on the gas after the team made a steady start. Nicholas Kirton on debut also looked in good rhythm. Jeremy Gordon and Dillon Heyliger picked up three wickets each. They were put under pressure in the middle, but picked up wickets at regular intervals to stem the run-flow.

Nigeria was rusty on the field and their bowlers sprayed the ball around, leaking runs at an alarming rate. Their batting lacked in firepower big time. Five of their batters got into the double digits, but neither could go and make it count. Only Leke Oyede looked positive to some extent and got 39 runs, but didn’t get adequate support. The team needs to put forth a collective effort to come back.

The prediction is for Canada to win the match.