Yashasvi Jaiswal is averaging 156 in this World Cup in five innings after scoring 312 runs.

The final of the 2020 ICC Under-19s World Cup will be played between India Under-19s and Bangladesh Under-19s at Senwes Park in Potchefstroom on Sunday.

After 47 ODIs over 22 days, two of the best teams, India and Bangladesh will lock horns in the final of the ICC U19 World Cup in South Africa. The Senwes Park in Potchefstroom will play host to the iconic game as the Junior Tigers will look to continue their dream run in the tournament. Bangladesh defeated New Zealand by chasing 212 runs courtesy of a stunning century from Mahmudul Hasan Joy.

India, on the other hand, thumped the arch-rivals Pakistan in the first semi-final. The trio of Kartik Tyagi, Ravi Bishnoi and Sushant Mishra first restricted the opposition to 172 and then Yashasvi Jaiswal put out an exhibition of some superb shots in the chase. The elegant left-hander also got to his century with a six which were also the winning runs as India sealed their place in the final.

Both the teams will give their best shot in the title clash with the World Cup on offer and no doubt it will be a very close game.

The forecast, as of now, is not so encouraging. There is more than 50% chance of rain with thunderstorms around 9-11 AM local time. There is every possibility of things improving over the next 36-48 hours and the fans also will be hoping for the same. The temperature is expected to hover in the early 20s during the match according to AccuWeather.

The final will most likely be played on a fresh pitch at the Senwes Park and it should be a decent one for batting. However, in the last three matches, the run-scoring has proved to be tough for the team batting first. But this being a pressure game, the side winning the toss might look to bat first and post a par total on the board like India did in the quarter-final against Australia.

Yashasvi Jaiswal has to be your top pick in Dream11 Fantasy. He averages 156 in this World Cup in five innings after scoring 312 runs. Jaiswal also tends to strike with the ball whenever needed. Ravi Bishnoi (13 wickets) and Kartik Tyagi (11 wickets) are the top bowlers for India U19 while Sushant Mishra also starred with the ball in the semi-final. Saxena and Tilak Varma could also make an impact in the final.

For Bangladesh, Towhid Hridoy is the talented batsman and will play a crucial for his team batting at four. Mahmudul Hasan Joy is in great form having scored a ton in the previous game. Rakibul Hasan has picked 11 scalps in the tournament and could be a vital player again along with Shoriful Islam. 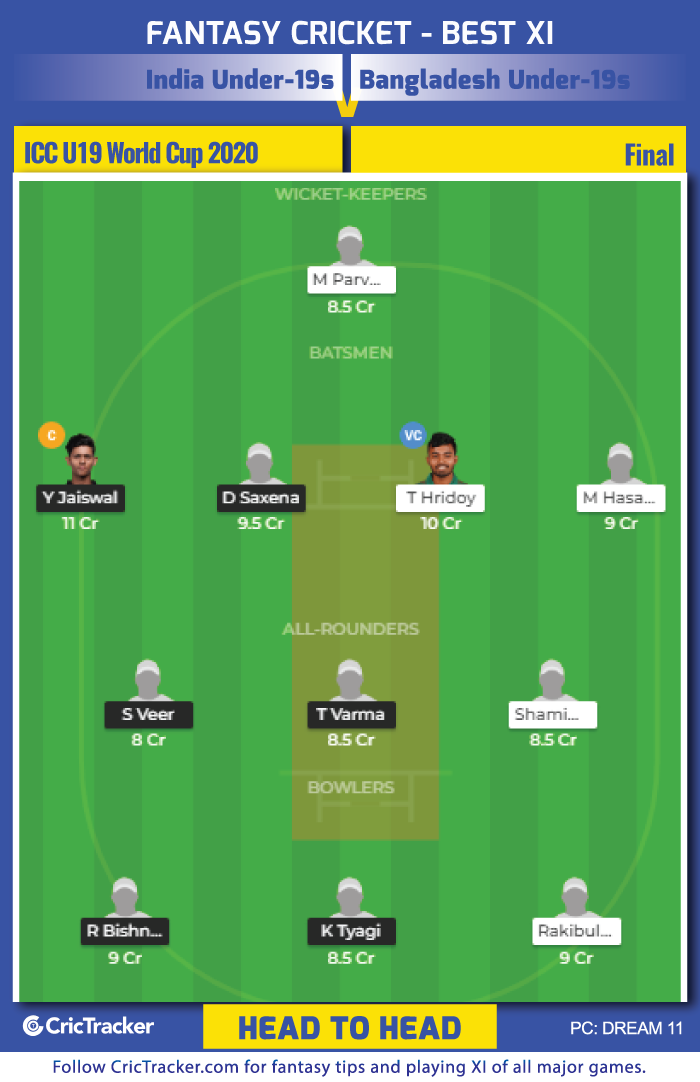 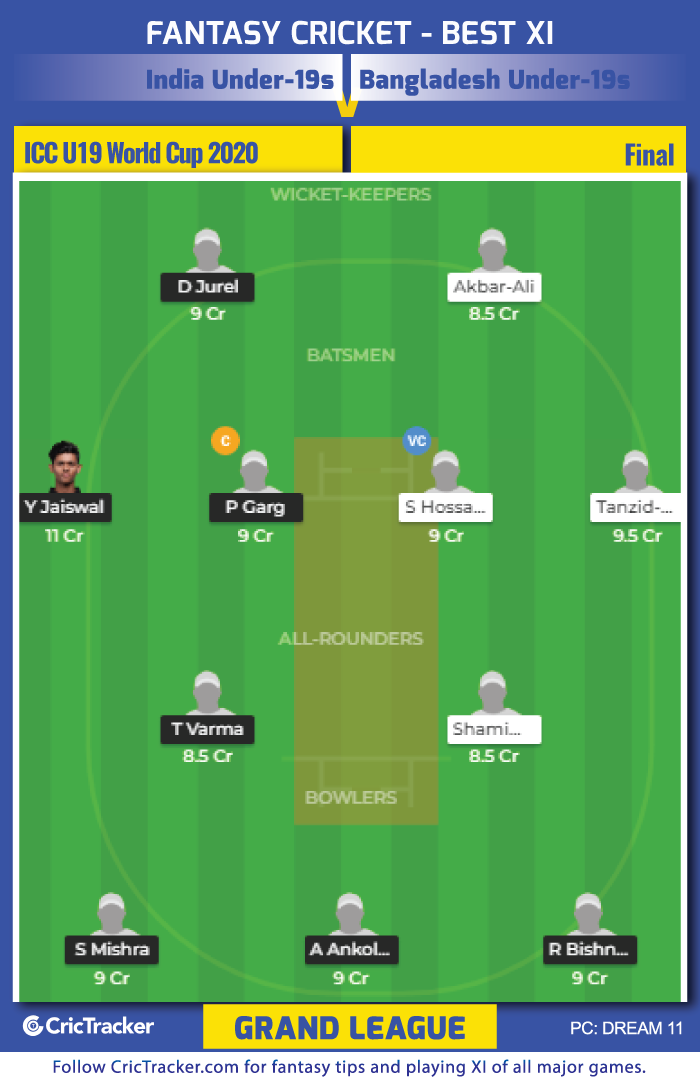 India’s middle-order hasn’t batted much in the tournament. Many won’t be expecting for the likes of Varma and Garg or even Jurel to make an impact. Considering an early fall of wicket of either Jaiswal or Saxena, it would be wise to pick the middle-order batsmen as well. Also, in Grand League contests, can make Varma or Garg captain as they might turn out to be a surprise pick in the final.

Moreover, Priyam Garg hasn’t had a great tournament thus far. And the captain might step up when the team needs him the most.

While India start as overwhelming favourites, Bangladesh can also put their best foot forward to win their first-ever U19 World Cup.