There could be credits issue for this game as the likes of Kaur, Mandhana, Healy, Lanning couldn't be fit into one team.

The 1st match of ICC Women’s T20 World Cup will be played between Australia Women and India Women at the Sydney Showground Stadium in Sydney.

So, here we are then! After weeks of practice, build-up and euphoria, it is finally time for the ICC Women’ T20 World Cup to get underway. And, what a way to start the tournament than by having two pre-tournament favourites in defending champions Australia and last editions semi-finalists India lock horns at the Sydney Showground Stadium.

Both sides recently featured in the tri-series where they played three games against each other. While both sides won one game apiece in the league-stage, the Aussies got the better of India in the final as Jess Jonassen’s five-wicket haul once again revealed the chink in Women in  Blue’s armour- the misfiring middle-order.

But the Aussies have experienced it in the past that you underestimate India at your own peril. India will once again bank on their top-4- Smriti Mandhana, Jemimah Rodrigues, Shafali Verma, and skipper Harmanpreet Kaur- to spearhead their batting unit and their spin attack to put a stranglehold on the famed Aussie batting unit.

The hosts, on the other hand, have been dealt with a body blow in the form of injury to fast bowler Tayla Vaeminck, who has been ruled out of the competition. Apart from recuperating from the body blow, the Aussies will have to deal with the pressure of home expectations as the six-time champions aim to win their first title on home soil. Can India gatecrash their party, as they did in 2017 and 2018? We’ll wait and see.

It is expected to be an overcast day in Sydney on Friday. According to the weather report, while the temperature is set to hover between 18-23 degrees Celsius, the humidity is set to be around 65%. Chances of rain- 50℅.

The pitch at Sydney Showground Stadium has usually been a slow surface where the ball tends to hold a bit into the surface. The ground has also been hampered with rain in the past few fixtures and with Friday also expected to be an overcast day, the fast bowlers may also come into the reckoning.

Tayla Vlaeminck has been ruled out of the tournament due to injury; Molly Strano has replaced her in Australia’s squad.

Australia Women- Alyssa Healy may have endured a horrendous run in the recently concluded tri-series but she is too good a player to miss out and the Aussies will be banking on her to come back to form. Apart from Healy, the likes of Beth Mooney and Meg Lanning will lead the batting while Ashleigh Gardener, who scored 167 runs at 33.50 which also included a whirlwind 92 against India, could turn out to be the X-factor.

Champion all-rounder Ellyse Perry will once again be crucial with both bat and ball while Jess Jonassen, who claimed 5-12 in the final against India and Megan Schutt will lead the bowling department.

The bowling unit will be led by their spinners in Deepti Sharma, Radha Yadav- who are the leading wicket-takers for the Women in Blue since the last World Cup, alongside Rajeshwari Gayakwad- the leading wicket-taker in the recent tri-series and Poonam Yadav, who claimed a three-wicket haul in the warm-up game against West Indies. 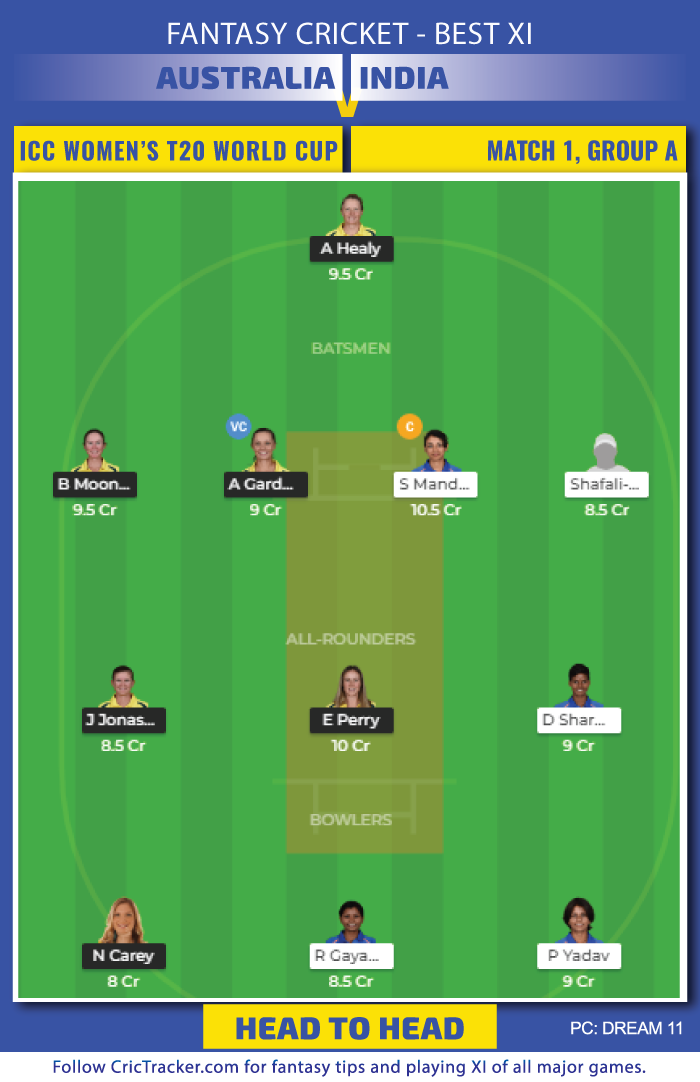 Both sides have got power-packed top-order batters in the form of Smriti Mandhana, Alyssa Healy, Shafali Verma, Ashleigh Gardener. Hence, opting for them as captain/vice-captain can be a good punt.

If you are aiming to pick an all-rounder as captain, you don’t have to look far than Ellyse Perry. Both sides have got brilliant spinners in the form of Deepti Sharma, Rajeshwari Gayakwad, Jess Jonassen, Poonam Yadav, Molly Strano. And, with the pitch expected to be on a slower side, picking them as captain/vice-captain in your grand league ain’t bad a punt.

There could be credits issue for this game as the likes of Kaur, Mandhana, Healy, Lanning couldn’t be fit into one team. You will have to take a tough decision to leave one of them out.

Megan Schutt could turn out to be a surprise pick in Grand Leagues as the overcast conditions might help her as she swings a ball a fair way.