The in-form duo of skipper Dane van Niekerk and Marizanne Kapp will be hoping to deliver another match-winning performance.

The Proteas Women, in their previous game against England, cruised to the target of 124 runs with two deliveries to spare on the back of impressive batting performances from Dane van Niekerk and Marizanne Kapp. The duo smoked 46 and 38 respectively to steer their side to the triumph. Mignon du Preez‘s 18-run cameo also proved crucial for the South Africa Women, who registered their first victory of the tournament to climb up the top of Group B table.

Thailand Women, on the other hand, will be aiming to consolidate a win after showcasing two dismal performances in their two opening matches. In their previous match against England Women, they succumbed to a massive target of 176/2 and could post only 78 runs on the board. Apart from the lone effort from Nattakan Chantam, no other Thailand Women batsman could stick to the wicket for a prolonged period of time.

The pitch at Manuka Oval is expected to favour the batting side. Batswoman of the sides will be aiming to fire off and post a massive score to put the opposition under pressure. There are no chances of rain to intervene in the match whatsoever as the weather is expected to be mostly sunny. The temperature will hover around 27 degrees Celcius according to Accuweather along with low levels of humidity.

The in-form duo of skipper Dane van Niekerk and Marizanne Kapp will be hoping to deliver another match-winning performance. Skipper Niekerk, who clinched the Player of the Match in her previous match, will also be looking to lead her side from the front. She delivered an impressive performance in her previous match by smashing 46 runs and plucking two wickets in her spell. The Proteas Women will also be bolstered by the likes of Lizelle Lee and Mignon du Preez in their squad.

Nattakan Chantam is touted to steer the Thailand batting force yet again. The right-handed batswoman emerged as the top-performer for her side against England Women as she smashed 32 runs off 53 deliveries along with Naruemol Chaiwai, who amassed 19 off 23 deliveries. Chanida Sutthiruang, who failed to leave a mark in her previous match, will be eyeing to steer Thailand Women to their first victory of the tournament. 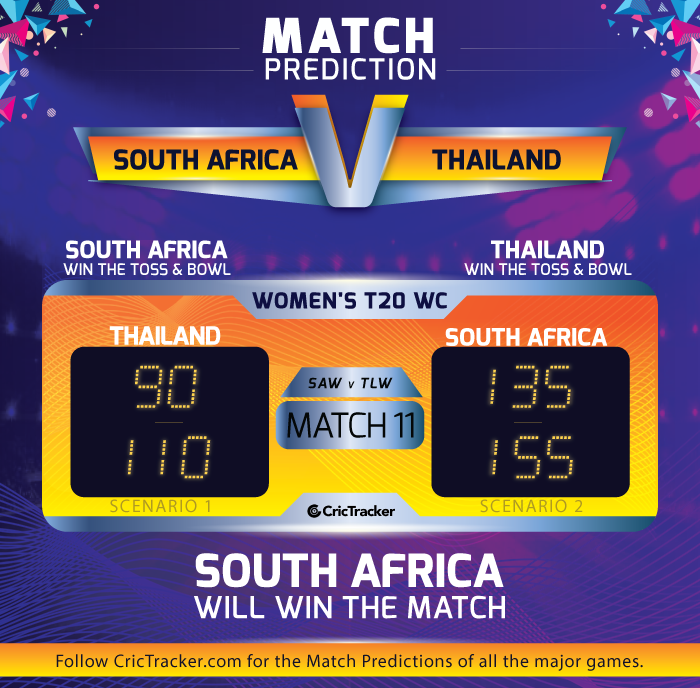 The second encounter of the day will be played between two stalwarts– England Women and Pakistan Women in Match 12 of the tournament. Both sides have registered victories in their previous clashes and will be aiming to register another victory under their belt. England registered a comfortable 98-run victory in their previous game against Thailand. Thailand Women’s bowling force was decimated by the duo as Sciver (59) and Knight (108) remained unbeaten to guide their side to a mammoth total of 176/2.

Similarly, the Women in Green also flagged off their T20 World Cup heist in style as they registered a comfortable eight-wicket victory against West Indies Women. After winning the toss and electing to bat first, the Women in Maroon posted a total of 124 runs on the board on the back of impressive knock from skipper Stafanie Taylor. However, Pakistan Women– on the back of impressive batting display by Javeria Khan and skipper Bismah Maroof (38) cruised to the target with 10 deliveries to spare.

All eyes will be on Heather Knight to replicate her last match’s heroics. Knight has been in sublime form lately and has delivered consistent performances with the bat as well as the ball. Along with Knight, Sciver will also be playing a pivotal role in England’s T20 World Cup campaign. Sciver has the potential to contribute to the bowling department as well. She decimated Thailand’s batting lineup by scalping two wickets in her previous match along with Anya Shrubsole, who also plucked three wickets under her belt.

The Women in Green are equipped with a strong batting force comprising the likes of Javeria Khan, Bismah Maroof and Muneeba Ali. Along with a robust top-order, Pakistan Women are also equipped with Nida Dar’s all-round brilliance. She also delivered an impressive all-round display against West Indies Women by scalping two wickets and amassing 18 runs. Dar will be aiming to utilize her BBL experience in order to steer Pakistan to the title glory. Diana Baig and Aiman Anwer, who scalped two wickets each against the Women in Maroon, will be assisting Dar. 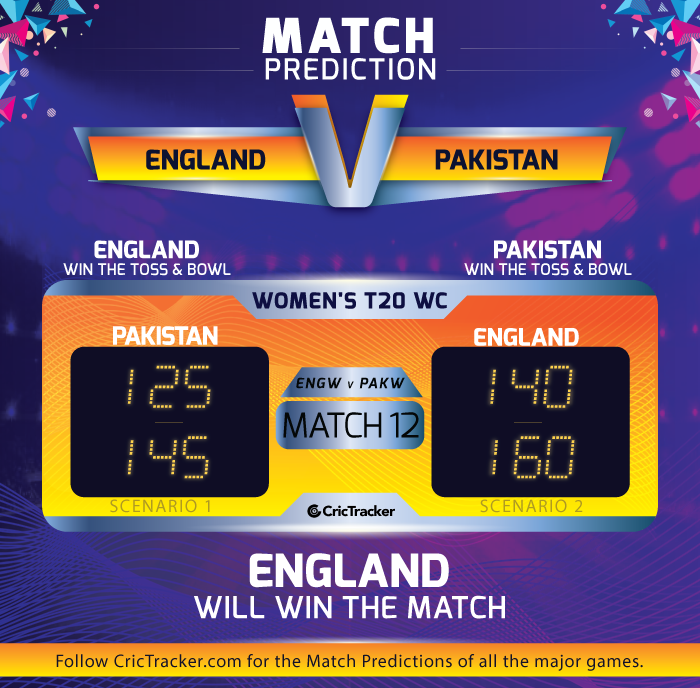