Stafanie Taylor has been ruled out of the tournament after she developed a groin injury in the last match.

The teams going into the semi-finals of the 2020 Women’s T20 World Cup have already been decided. Even as from Group A, India and Australia have qualified, South Africa and England have made it through from Group B. But The fixtures are yet to be decided. The encounter between South Africa and the West Indies at the Sydney Showground Stadium would put an end to the same.

If the Proteas win then they would be finishing atop the points table with four victories. In that case, they would be locking horns Australia in the semis with England playing against India. In the other game in Group B, Thailand and Pakistan are scheduled to face off at the same venue. Pakistan bowed out after their loss to the Proteas and they would be looking to end on a winning note.

The pitch at the Showground hasn’t been a belter by any means. The spinners have mostly dictated terms in helpful conditions. All three games played here have been won by the teams, batting first. The weather forecast isn’t promising for Tuesday. There are predictions of heavy shower from 2 PM until the end of the day. It won’t be a surprise if both the matches in Sydney get washed.

Pakistan vs Thailand, Match 19, Group B

For Pakistan, Aliyah Riaz and Javeria Khan have 80 and 82 runs respectively. But apart from them, there’s not much to talk about their batting. The likes of Nida Dar and Muneeba Ali have also floundered. Dar has five wickets though. In bowling, fast bowler Aiman Anwer has six wickets to her name. Diana Baig has managed quite a bit of seam movement thus far and also has five wickets.

Thailand’s bowling has looked decent in patches. Suleeporn Laomi and Nattaya Boochatham have economy rates in the 6s. Soraya Lateh has a couple of wickets. Their batting hasn’t threatened oppositions thus far. Nattakam Chantam and Nannapat Koncharoenkai had a couple of scores in the 30s. Kamchomphu got 26 in one of the games, but apart from that, Thailand have found it tough. 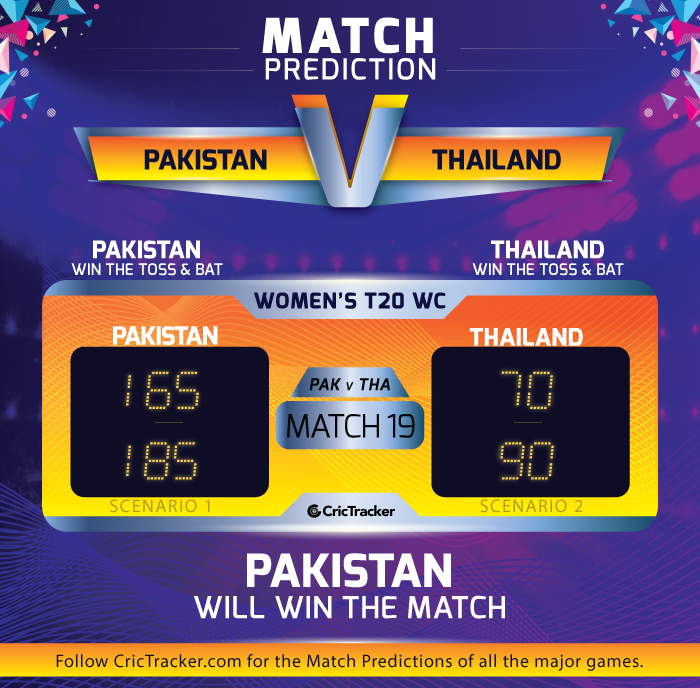 Stafanie Taylor has been ruled out of the tournament after she developed a groin injury in the last match. Her replacement hasn’t been named though. Britney Cooper twisted her ankle and even Chinelle Henry isn’t in the greatest of shapes. Coach Gus Logie is now finding it tough to field a fit playing eleven. Barring the game against Thailand, the West Indies have been at their best one bit.

The Proteas are unlikely to make any changes for the game. Lizelle Lee has a century to her name. Laura Wolvaardt notched an unbeaten 53 against Pakistan. Marizanne Kapp hasn’t had an outright failure, scoring 69 runs in two matches. Dane van Niekerk has four wickets and it’s time for her to come back from the twin failures. Pacer Shabnim Ismail is their top wicket-taker with five scalps. 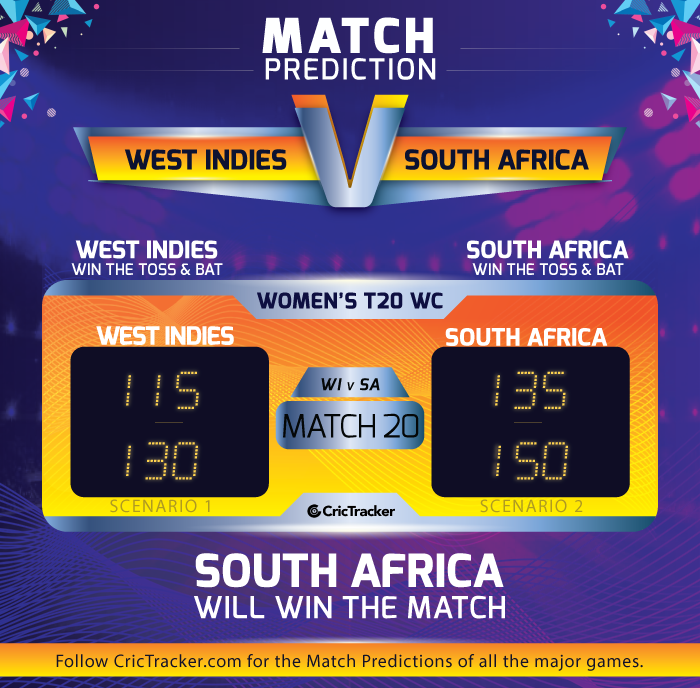