Despite Smriti Mandhana's absence from the last game, Shafali Verma stepped up and played a quick-fire knock to lay the foundation for India's triumph.

One of the favourites to clinch the trophy– India– have kicked off their campaign on a positive note after handing defeats to Australia and Bangladesh. The Women in Blue, after a robust bowling performance against Australia, continued their impressive form by outclassing Bangladesh Women in the subsequent encounter.
Taking into consideration the recent form and performances, Harmanpreet Kaur and Co. are in the pole position to clinch the coveted Women’s T20 World Cup trophy.

However, in the previous three encounters, New Zealand Women have toppled India. The Kiwi Women also kicked off their T20 World Cup campaign on a positive note by thumping Sri Lanka by seven wickets in their first game of the tournament.

Sophie Devine’s brilliant 75-run knock propelled them to the target of 128 runs while Hayley Jensen and Amelia Kerr did their job diligently to curb Sri Lanka’s run-flow by scalping wickets at regular intervals. Sophie Devine and Co. will be eager to carry on their winning momentum and register their second victory of the tournament.

This will be the first match of the tournament which will be hosted at the Junction Oval. The pitch at Junction Oval is expected to offer a fair battle between bat and ball. The bowlers will get some early whereas the batswomen will be able to command the game after the early stages of the game.

The weather is expected to be mostly sunny during the course of the game. The temperature will hover around 21 degrees Celcius according to AccuWeather and the humidity levels are anticipated to be around 52 per cent.

Harmanpreet Kaur will be strengthened by a robust batting force. Despite Smriti Mandhana’s absence from the last game, Shafali Verma stepped up and played a quick-fire knock to lay the foundation for India’s triumph. Poonam Yadav and Shikha Pandey have also been in red-hot form and have bolstered India’s bowling attack. The duo wreaked havoc in their last game against Bangladesh Women to decimate their batting attack.

Moreover, Smriti Mandhana‘s return to the squad will strengthen India Women’s batting force. After missing out against Bangladesh due to viral fever, the swashbuckling batswoman is expected to mark her return against New Zealand. Teenage prodigy Shafali Verma also has the potential to provide her side with a flying start.

Like India, the Kiwi batting force also consists of many stalwarts like Sophie Devine, Rachel Priest and Suzie Bates. Considering the prolific run-churning form of skipper Sophie Devine, she is expected to emerge as a vital cog for the New Zealand side. The Kiwis also have a formidable bowling lineup which includes Amelia Kerr, Anna Peterson and Lea Tahuhu. Considering their impressive past record against the Women in Blue, Sophie Devine and Co. will be eager to hand India their first defeat of the Women’s T20 World Cup. 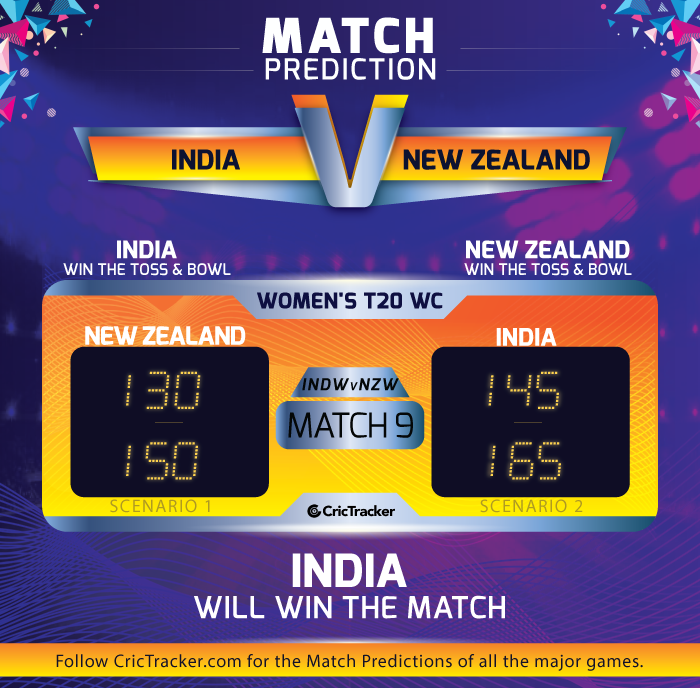 In the second encounter of the day, Australia Women and Bangladesh Women are slated to lock horns in Match 10 of the Women’s T20 World Cup 2020. After registering a win and a defeat in their first two matches, Australia are currently poised third in the points table. After thrashing Sri Lanka Women by five wickets in the previous match, Meg Lanning and Co. will be eager to register their second triumph of the T20 World Cup.

Bangladesh Women, on the other hand, will be aiming to register their first victory of the tournament after suffering a thumping defeat against India in their opening match. Despite amassing 142 runs on the scoreboard, Bangladesh Women were inefficient in curbing down India’s prolific batting force. A hapless bowling attack was one of the main reasons behind the Tigresses’ defeat in their opening fixture.

The pitch at Manuka Oval is expected to favour the batting side. Batswoman of the sides will be aiming to fire off and post a massive score to put the opposition under pressure. There is a slim chance of showers to intervene in the match as the weather is expected to be partly cloudy. The temperature will hover around 26 degrees Celcius according to Accuweather along with low levels of humidity.

Australia Women are equipped with many batting stalwarts who are competent in changing the course of the match single-handedly. Along with Lanning and Haynes, Mooney has also delivered impressive batting performances for the Aussies. Despite struggling to deliver in recent matches, all eyes will be on Ellyse Perry, who is regarded as one of the best all-rounders in Women’s cricket. Jess Jonassen and Megan Schutt will be at the helm of the Aussie bowling force.

Bangladesh Women will be banking on the experience of Rumana Ahmed. The Salma Khatun-led side has many experienced players in their arsenal including the likes of Murshida Khatun and Nigar Sultana. Skipper Salma Khatun also possesses the calibre of delivering a match-winning performance in both the departments. She had flaunted her wicket-taking ability quite well against India Women after she scalped two wickets in that encounter. She was well assisted by Panna Ghosh who also plucked two wickets. 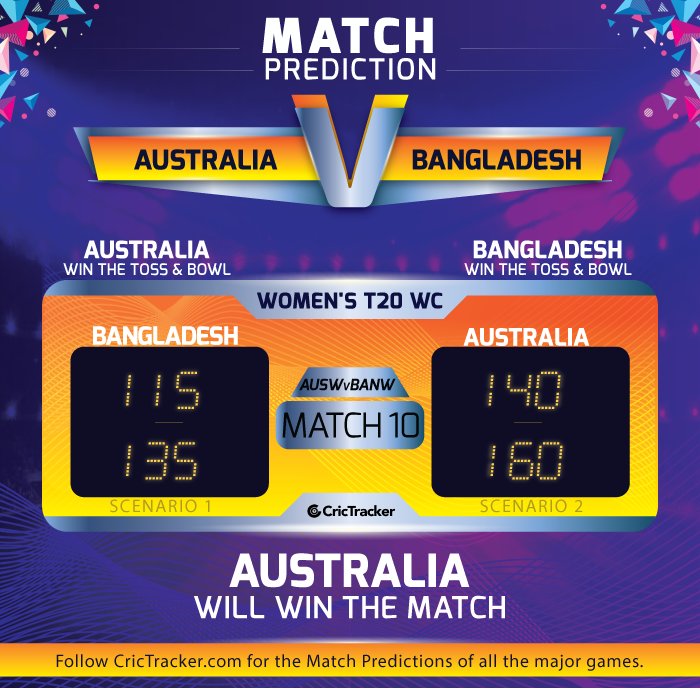