Harmanpreet Kaur scored 118 runs during T20I Tri-series at a low strike rate of 94.4,

It seemed as if all the supporters of India Women were on their feet when Harmanpreet Kaur smashed ‘that’ 171* against Australia Women in the 2017 ODI World Cup. She was on verge of attaining godly status in India when she smashed a 53-ball 103 against New Zealand Women in the 2018 T20 CWC. But ahead of the Women’s T20 World Cup 2020, Kaur finds herself down on confidence with the bat and many voices raised over her intent while batting in the T20I format.

Being helpless in some of the ridiculous middle-order collapses especially in the big matches began to draw criticism over the T20I skipper. Kaur’s role in excluding Mithali Raj from the shorter format also worked against her in these matters. In the recent T20I Tri-series, Harmanpreet struggled to get going post the series opener. In one of the games, she scored 14 off 23 balls and was dismissed trying to accelerate. She scored 118 runs during that series at a strike rate of 94.4 which is unlike of Kaur’s playing style. 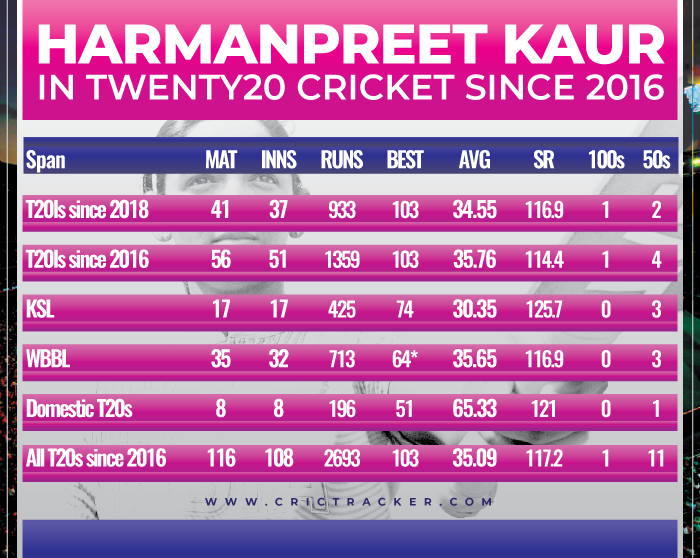 There is hardly a stinking difference between her strike rates in T20Is in the recent past and the overseas T20 leagues – Kia Super League and Women’s Big Bash League. But the thing that goes against Harmanpreet in Indian colours is the dependency of a whole middle-order over her. The middle-order hardly gives freedom for Kaur to take an aggressive route early in her innings. Purely based on experience and ability, the most trustable batter after Kaur in the Indian middle-order is Veda Krishnamurthy.

However, the 27-year-old seems to be out of confidence over the last two years or either she lacks the trust from the team. The trend of her poor performances began in 2018 after enjoying success through 2017-18. She was dropped from the XI for the 3rd ODI during the home series against Australia.

This exclusion came despite Veda scoring two of the three fastest ODI fifties by an India Women in the space 8 months. Since that exclusion, Veda managed to score only one fifty in Internationals – 57* vs West Indies in 2019 after India were 17/2 inside four overs.

Krishnamurthy put on some good performances with the bat during India A tour of Australia. The management will be hoping if she could replicate that success in this tournament. Head coach WV Raman did point out on the 20-30 runs left over by the top three and showed confidence in the middle-order for finishing off the matches. It can be possible only if Veda gains her momentum and make the skipper’s stay at the crease comfortable.

Deepti Sharma and Taniya Bhatia are other options in the middle-order for India who lack big hitting. This makes it tough for India Women to even chase 7 runs an over in the last 5-6 overs without any of Smriti Mandhana and Harmanpreet at the crease. India’s average different between top-order and the rest since 2018 reads 9.31 which is the 4th worst among the T20 CWC teams. New Zealand Women have the highest difference of 21.52 as the superstars Sophie Devine and Suzie Bates feature in the top three.

During the T20I Tri-series, there were calls for Harmanpreet Kaur to be promoted as an opener by the commentators. One of the reasons for it being Kaur playing dot balls at the start of her innings. But the Indian team need not experiment anything new and have to continue with their skipper at No.4. The most balls Harmanpreet faces, the higher will be her strike rate irrespective of her batting position. Since the start of 2018, Kaur faced 30+ balls in a T20I innings on 10 occasions and had an SR of 122.37.

Whenever Harmanpreet batted 15 or fewer balls in a T20I since 2018, her strike rate reads only 102.13. Her maiden T20 hundred against New Zealand Women is an example of what she needs to do in the current setup and middle-order. During that innings, had only four single from the first 10 balls she played.

Every 10 balls, the strike rate kept rising and powered her team to a big total, more than what they wanted. If for India have any chance at the T20 CWC title, Harmanpreet Kaur has to believe in her template and ability that had brought the team the desired results in the past.