New Zealand scored 211/5 in 46.1 overs prior to the rain interval in Manchester.

The fear of rain in Manchester did come to haunt during the semi-final game between India and New Zealand as Kiwis’ batting innings was interrupted after 46.1 overs of play. Kane Williamson elected to bat first on what seemed to be a good surface to bat on. However, the Indian pacers found something off the pitch and the spinners got a bit of turn as the innings progressed. New Zealand hardly made any efforts to increase their run-rate in the first 40 overs as they crawled to 155/3 at the start of the 3rd powerplay.

They did try to cover up in the final ten as they scored 56 runs for the loss of two wickets in 6.1 overs before the rain interruption. Ross Taylor is unbeaten on 67 off 85 balls while Kane Williamson also scored 67 from 95 deliveries before getting out. For the knockouts, the overs start getting reduced only after two hours of interruption. If there is no chance of further play today, the game will resume on Wednesday with New Zealand completing the remaining 3.5 overs of the innings.

However, if the game is reduced to say 45 overs today itself but rain returns before the start of play, the reserve day will begin with India chasing the revised DLS target of 235 in 45 overs. New Zealand could slightly have a better advantage with DLS given India’s doubtful middle-order. If the Kiwi bowlers can dismiss two of India’s top three, they can put the struggling Indian middle-order chase at an asking rate of six runs. India’s chase will begin with a required rate of six or more if the game is reduced to less than 35 overs.

Possible DLS targets for India in the semi-final: 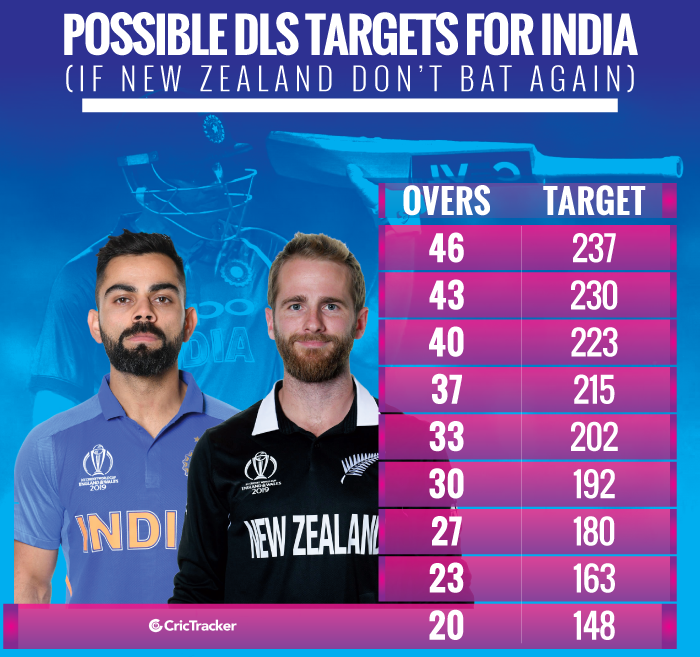 The tactic of losing only five wickets so far might work in such cases for the Blackcaps. They will get a handicap of seven runs if the game is reduced to 49 overs on the DLS method and 20 and 15 runs respectively in case of 48 or 47 over-a-side game. New Zealand’s run rate touched 4 only in the 42nd over but India, in worst possible case, might be chasing 148 in 20 overs i.e. 7.4 an over. If New Zealand doesn’t return to bat, the smallest target India could get is 237 in 46 overs which is still 26 more than New Zealand’s total in 46.1 overs. 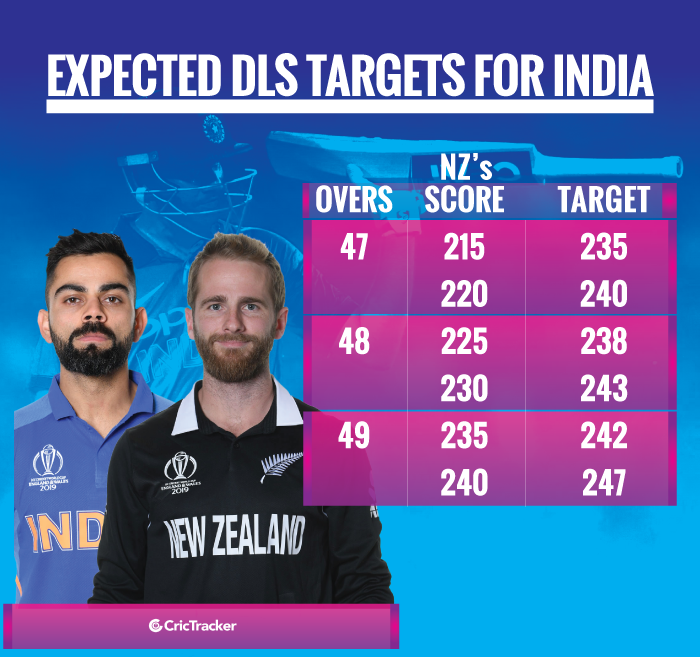